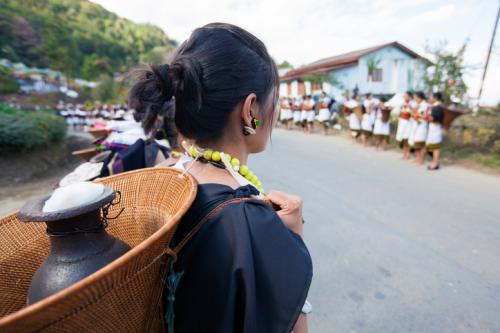 Protests erupted in Nagaland after its government refused to revoke the decision to reserve 33 per cent seats for women in upcoming civic body polls. The violence led to two deaths on February 2.  Curfew was imposed amid protests and election in 32 municipal bodies would be declared null and void, as per sources.

Influential tribal have been demanding the cancellation of women’s reservation and warning citizens against participating in urban bodies elections. Ao Sengden, a body of Ao Tribe of Nagaland, issued diktat in local dailies asking people not to participate and warning of appropriate punishment, if they did. Hokiye Sema, president of Central Naga Tribal Council, urged state government for abolishment of reservation provision. Another tribal body, Angami Public Organisation, has also announced boycott of the election, stating that the reservation is against tribal customs.

The protestors believe the reservation is against their customary law and violates special rights guaranteed to Nagaland state under Article 371(A) of the Constitution. It states, “Notwithstanding anything in this Constitution, no Act of Parliament in respect of religious or social practices of the Nagas, Naga customary law and procedure, administration of civil and criminal justice involving decisions according to Naga customary law, ownership and transfer of land and its resources, shall apply to the State of Nagaland unless the Legislative Assembly of Nagaland by a resolution so decides.”

History of the case

Women in Nagaland have been fighting for representation in municipal and town councils taking a legal course of action. Naga Mothers Association (NMA), has been demanding reservation in local bodies for the past three years, but state authorities have been denying it by not holding elections, citing Naga customs and possible violence derailing the ongoing peace process.

The matter has now reached the Supreme Court, after NMA challenged a Gauhati High Court ruling. The apex court ruled in their favour in April 2016.

NMA, an apex body of women in the state, had petitioned to the Gauhati High Court in June 2011, seeking the holding of municipal and district council elections. The term of municipalities and town councils in the state had expired in March 2010. NMA members Rosemary Dzuvchu and Abeiu Meru filed the petition on its behalf.

A single judge of Gauhati High Court of Kohima bench ruled in favour of NMA in October and asked the state to conduct elections. The court had found the state’s reasons for not granting NMA's demand flimsy and baseless. The state had said that it received letters and representations from many groups that opposed reservation of one-third seats for women, saying it is against the Naga custom and that it would lead to large-scale disturbance and violence. But the state failed to furnish evidence of any customary practice of excluding women from contesting or of disturbance.

The state counsel had argued in court that authorities tried to hold elections in one of the 19 councils (Mokokchung Council) on May 7, 2011, which was marred by large-scale violence which forced the state to cancel the election.

What do the stakeholders say?

The special leave petition filed in the apex court claims that the protest was on account of certain changes in the land laws in the Nagaland Municipal Act of 2001and not due to reservation of seats for women. The petition says the state had not put anything on record (newspapers reports, for instance) to show violence, any police complaint related to law and order failure or any arrest being made.

The verdict of the single judge bench was challenged and set aside by Kohima division bench of Gauhati High Court, on July 31, 2012. The bench asked the state government to set up a committee to look into the claims of certain groups and directed the municipal elections be suspended till the committee gave its recommendations.

According to reports, NMA's demand was opposed by organisations such as Naga Ho Ho, Eastern Naga People’s Organisation (ENPO) and Ao Senden. All these groups are influential in different pockets of the state.

When contacted, president of Naga Ho Ho, Kezile Tuo, said his organisation was not against reservation for women as such. “We are against rotational reservation of seats for women in the municipality and town councils. We want reservation should continue on given seats through proper mechanism,” said Tuo.

The NMA protested tabling of a legislation by state minister Shurhozelie Liezietsu to reject 33 per cent reservation in October last year. Tuo’s organisation opposed these protests. When asked why, Tuo denied the charge. He said his organisation was against amended provisions of the municipal Act which were not in accordance with Article 371 (A) of the Indian Constitution that protects customary rights of Naga tribes. The Article states that no Act of Parliament in respect of Naga customary law and procedure shall apply to the state of Nagaland unless the Legislative Assembly of the state by a resolution decides to adopt it.

Sangyu Yaden, president of Ao Senden, another tribal group, said he opposed the reservation. “Reservation is against the customary laws and also against the Constitution's provisions of Article 371 (A),” he said. But he did not elaborate on this.

The state chief minister and urban development minister, on the other hand, were in favour of reservation and incorporated it in the Nagaland Municipal Act in 2006. However, they were reluctant to act on it.

NMA's Dzuvchu asserts there is no such customary practice in Naga society which would be harmed by the implementation of reservation of seats for women. “Even Nagaland government didn’t object when the 74th Constitutional Amendment Act of 1992 was passed where 243 (T) was inserted requiring reservation of one-third seats for women and 243 (U) was inserted which lays down that election to every municipality would be held before the expiry of its duration.”

There is one-fourth reservation for women in the village development boards (VDB) since November, 1989, under section 50 of Nagaland Village and Area Council Act of 1978, she added. “Reservation is not new to the women of Nagaland. It has been adopted in VDBs, then why is it not being adopted in the municipality?” asked Dzuvchu.

“It's all about huge funds and unwillingness to share power with women,” said Dzuvchu, who teaches literature at Nagaland University. “The Nagaland state cites law and order problem for not holding timely elections with reservation, then how would it be possible to conduct state legislative assembly elections in March?’’ asked Sanjay Sharma, a health activist, and also Nagaland state coordinator of Human Rights Law Network.

No government official was willing to speak on the matter, saying the matter is sub-judice.