Although the state govt picked up pace compared to recent years, there are reports of slowdown in work being done

There is increasing concern over whether the Odisha government’s decision to create 200 million person days of work under the Mahatma Gandhi National Rural Employment Guarantee Scheme (MGNREGS) in 2020-2021 will help provide jobs to workers on the ground.

Several workers who migrated out of the state have returned home fearing long-term unemployment across the country’s urban areas and megapolises due to the nationwide lockdown to curb the spread of the novel coronavirus disease (COVID-19).

As many as 600,000 workers were reported to have come back to Odisha from different parts of the country from the beginning of May, when the lockdown process was eased.

The Naveen Patnaik government, thus, faces an uphill task to create jobs not just for the returned workers, but those who were already in the state as well.

The government’s step to increase person days of work has brought immediate relief to a large number of workers in rural areas struggling for their livelihood.

At the same time, it seems to be a daunting task to meet the target as activities are not picking up as expected. There were reports of delayed payments at some areas as well.

The pace of MGNREGS work slowed down because of increasing rainfall in the state and Rajo, a festival celebrated across coastal Odisha but will pick up soon, Rajesh Patil, Director of special projects at the Panchayati Raj and Drinking Water department, told Down To Earth.

Activists and non-profits, however, remain concerned over the gaps between the decisions at the top level and implementation on the ground.

The state government directed collectors in all 30 districts to engage people in work under MGNREGS at the same time as it began the process of bringing back migrants in May.

The government plans to create 130,000 water structures of different sizes and other natural resource assets through MGNREGS, according to officials. It also aims to plant 150 million seedlings in a huge afforestation drive before August.

Realising that the arrival of the monsoon slows MGNREGS work considerably in a normal year, the government devised works specifically for the rainy season.

A field manual for strategies to accelerate person days of work under MGNREGS in the rainy season was outlined by DK Singh, secretary of the Panchayati Raj department.

“It is proposed to provide an impetus in certain defined activities of MGNREGS and secure the livelihoods by promoting natural resource management during the rainy season,” Singh said. 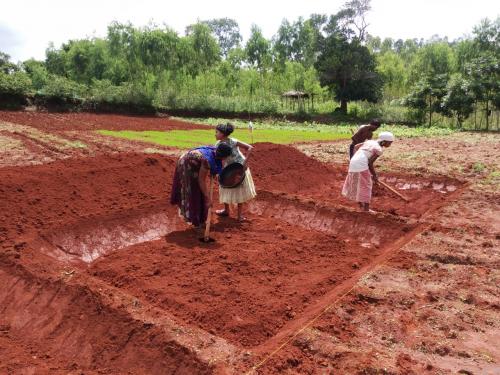 TCBs are labour intensive structures that help in soil and water conservation and have the potential to enhance land productivity by 20-30 per cent.

With an estimated cost of Rs 72,000 per hectare, such projects are being implemented in 294 of the state’s 314 blocks. In the remaining 20 migration-prone blocks, the cost of the project was estimated at Rs 99,000.

A hectare of TCB is expected to generate 302 person days of work.

On the other hand, staggered / contoured trench projects — supposed to check the flow of runoff water — are being implemented during the rainy season in community land. With a unit cost of Rs 1.22 lakh per ha, it is meant to arrest soil erosion and protect its top layer.

Over 50 million person days of work were generated in the state since April, according to MGNREGS data.

Experts and activists, however, said the average job generation per person was around 30 days between April 1 and June end, lower than the mandated 100 days.

Reports on the ground show that after the first several weeks of acceleration, progress in MGNREGS work slowed down.

“MGNREGS is the easiest scheme to provide jobs amid lockdown, but the truth is that the overall implementation of the scheme in the state is slow,” said Anjan Pradhan, convener of Odisha Shramajeebee Mancha that takes up issues relating to workers.

“If this pace continues, it will be tough for the Odisha government to accomplish its given target,” he added.

Several reasons seem to be in the way of proper implementation of MGNREGS in the state.

Though most migrant workers took up work under MGNREGS following their return, a sizable number are reluctant to continue working under the scheme as they earned more in their previous jobs.

Delay in getting wages

The daily wage fixed by the Union government for MGNREGS work per person is Rs 207. The Odisha government, however, pays Rs 298 per day in 20 migration-prone districts. In the remaining 10 districts, workers were paid Rs 207.

Banabas Bag, from Sialijudungi village in Kalahandi district, returned from Kerala. He said he was a skilled worker at a manufacturing unit on a daily wage of Rs 700. After returning, he took up MGNREGS works, which was a matter of compulsion, according to him.

Late payment was another reason for workers to lose interest. Gopinath Bhoi, a worker from Tapria village in Sundargarh district, returned home and took up work under MGNREGS. He completed his work three days early, but received payment 23 days after he completed his MGNREGS work.

In the case of several workers, their MGNREGS job cards are with local contractors who carry out MGNREGS works and moneylenders from whom they take loans with heavy interest before migrating. Such workers do not want to work out of the fear that contractors or moneylenders will take their payment.

Activists said though MGNREGS can provide jobs to those seeking work in rural areas, it should not be the only scheme to offer jobs to migrants returning home.

“It is time for the government to create avenues for skilled and semi-skilled workers in MGNREGS,” said Shanti Bhoi, an activist working on women workers’ issues.

Similarly, there was an urgent need for immediate implementation of a concrete programme to cover migrant workers, according to the activists.

The urban poor — daily-wage labourers, domestic workers and construction workers — in the unorganised sector do not have income or social security.

Some non-profits sent petitions to the state government demanding uniform increase in minimum daily wage for MGNREGS in all districts to Rs 600 and a minimum guarantee of employment to 200 days from a 100 days a year because of the COVID-19 pandemic.