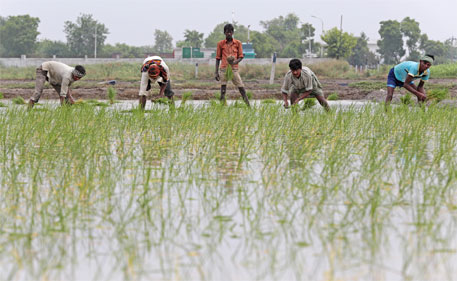 Prime Minister Narendra Modi has decided not to go ahead with the amendment of the Land Acquisition Act, 2013 to live up to his government’s pro-farmer image.

Modi decided not to bring in the fourth ordinance after the third ordinance lapsed on Tuesday. The move has given the Opposition a chance to claim that the government was forced to bow to the protest surrounding the Act. There has been stiff resistance from several corners over the dilution of the Act.

During the 11th edition of addressing the nation through the radio programme, Man Ki Baat, Modi said his government was farmer friendly and decided to continue with the previous government’s enacted law—the Right to Fair Compensation and Transparency in Land Acquisition, Rehabilitation and Resettlement Act, 2013 (LARR) Act, popularly known as the Land Acquisition Act.

“States claimed that they are facing challenges in acquiring land for creating infrastructure like rural roads, electrification, affordable housing and many more to create opportunities for employment for rural youths, so that we decided to go ahead with (the) states’ demand,” Modi said.

Changes in the Act

A small change that the Modi government has decided to bring in is that all kinds of land acquisitions made under 13 different acts will now be treated under the LARR Act.

Earlier, the government had brought three ordinances to amend the Act. It introduced it in the Lok Sabha in March this year and got it passed where it enjoyed a majority. However, it failed to sail through the Rajya Sabha.

In May, the Modi government had constituted a Joint Parliamentary Committee headed by S S Ahluwalia to re-examine LARR and suggest measures to change the Act.

Making a veiled attack on the Opposition, the PM accused that they were engaged in creating misconceptions against the government.

“I found misconception had been created against the proposed amendment and farmers were terrorised. So, our government has decided to not to go ahead with this change,” Modi added.

Meanwhile, the Opposition claimed victory over the government’s decision. Congress president Sonia Gandhi said that the decision to amend the Act was anti-farmer and would have supported a handful of rich people. Bihar Chief Minister Nitish Kumar said that the PM had to respect the national sentiment which was against the proposed changes.