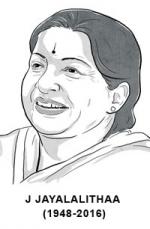 She may have earned the sobriquet “Imelda Marcos of India”, but she was also Amma (mother) to about 78 million people in Tamil Nadu. Jayalalithaa Jayaraman, the five-time chief minister of Tamil Nadu, had spoken about being “reborn with people’s prayers” on November 13. Three weeks later, the state was mourning her demise. The erstwhile resident of Poes Garden may be a “consummate autocrat” but hers is a story of transformation from extravagance to benevolence and a journey from a starlet to a Puratchi Thalaivi (rebel leader).

Experts and critics had called her model of development unsound, but for the economically weaker sections, getting two meals a day for R10 from Amma canteen and procuring medicines at 15 per cent discount from Amma pharmacies is a triumph over urban hunger and ill-health. For poor students, free textbooks, uniforms, school bags and cycles were a much-needed encouragement to stop dropping out of schools.

The first woman chief minister of Tamil Nadu also took it upon herself to fight female foeticide and infanticide in her first term. In 1992, she launched The Cradle Baby Scheme in Salem district—the heartland of female infanticide in the state. During her second stint as the chief minister, she extended the scheme to other districts. As many as 188 centres were equipped with incubators, life-saving drugs, gas connections, refrigerators and clothes for children. Days before she was hospitalised in September, Jayalalithaa also announced her decision to increase paid maternity leave to nine months for women government employees. From 1980 to 2011, women employees in the state were entitled to only 90-day maternity leave.

After 2011, Jayalalithaa started to build Brand Amma. Unperturbed by criticism and allegations of populism, she introduced a slew of welfare schemes, including Amma Salt, Amma Cement, Amma Drinking Water, Amma Seeds and Amma Mobiles. Taking her cue from the mid-day meal scheme, she also introduced breakfast meals in government schools. While initiatives like 20 kg free rice every month to all ration card holders, four goats/sheep to families living below poverty line, free sanitary napkins and breast feeding shelters were dismissed as electoral gimmicks by her detractors, the beneficiaries embraced them as a gesture of love. Just a week before she was admitted to Apollo Hospital in Chennai, the “Mother of Welfare Schemes” announced construction of Amma marriage halls at 11 places in Tamil Nadu, considering the difficulties faced by the low-income people in conducting social functions at expensive halls.

Contrary to conventional wisdom, Tamil Nadu has seen unusual coexistence of populism and economic growth. The “Iron Lady of Tamil Nadu” has managed to leave a state that is among India’s top five in social and economic indicators. The state has India’s lowest fertility rate and second-lowest infant mortality and maternal mortality rates. It provides more industrial employment than any other state. In contrast, Kerala has had impressive growth in human development indices but struggles to industrialise, while the highly industrialised Gujarat is yet to improve its social indices. “Tamil Nadu, under my leadership, is concerned more about delivering public service than lip service,” she had once said. Her empathy with the needs of the people and her pro-poor politics were born of the poverty she experienced in her childhood. Despite frequent setbacks, the tinsel town star from a Tamil Iyengar Brahmin family refused to follow a clichéd script and aimed for a bigger role.