India, the land of neem trees, faces acute shortage of neem oil, and now plans to import it for coating urea 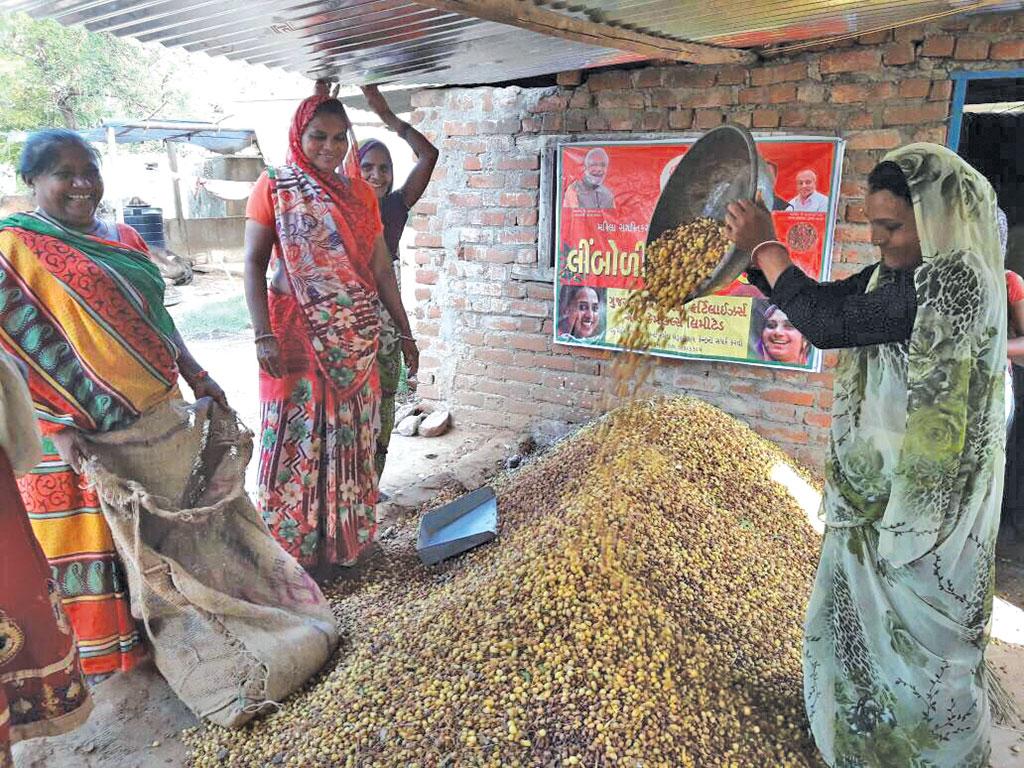 A neem seeds collection centre in Kheda district of Gujarat. Every year 30,000 tonnes of neem fruits are collected from across the country. Only 10 per cent of it gets processed for oil (Photo: Rajiv Kumar Gupta)

IF ONLY figures could support the claims. Early this year, Minister of State for Chemicals and Fertilizers Rao Inderjit Singh told Parliament that the “entire quantity of indigenously produced urea and imported urea is being neem coated” since 2015. His claim highlights the success of a landmark reform in ferti liser policy that makes it mandatory for manufacturers and importers to spray neem seed oil over urea before releasing it to farmers. But a back-of-the-envelope calculation suggests that either the government’s claims are far-fetched or manufactures are using spurious oil. The country, which hosts the maximum neem trees, faces an acute shortage of neem oil, to the tune of 85 per cent. Whispers in the corri dors of power have it that the gover nment may soon resort to import of neem oil from China and Myanmar to make New Urea Policy-2015 a success.

Urea is an important supplier of nitrogen, necessary for the growth of plants and high yields. But crops can absorb only 30-40 per cent of nitrogen present in this master fertiliser; the remaining mixed with runoff either contaminates waterbodies or evapo rates in the form of pollutant ammonia gas. Coating urea with neem slows down the release of nitrogen and gives crops more time to absorb the nutrient. Thus in 2015, when the Nati onal Democratic Alliance government made neem coating compulsory, its aim was to boost crop productivity with less urea and thereby reduce the subsidy burden and curb nitrogen pollution. Since the selling price of fertiliser is controlled by the govern ment, it spends Rs 70,000 crore a year to compensate companies for the loss. The government claims that neem coated urea can reduce this burden by Rs 20,000 crore by stopping illegal diversion of prilled urea for other industrial uses such as making cosmetics, pharmaceutical products and as an adulterant in milk, and redu cing urea consumption by farmers. In fact, since 2017 the ministry has reduced the size of neem coated bags to 45 kilograms from 50 kg earlier.

But a look at the data with the fertilizer ministry suggests the govern ment is nowhere near its objectives. Since 2015, the country’s urea consumption has in fact increased from 29.95 million tonnes (mt) to 31.55 mt this year. While domestic production has remained almost static, import has increased by over 38 per cent (see ‘Reform agenda...’). 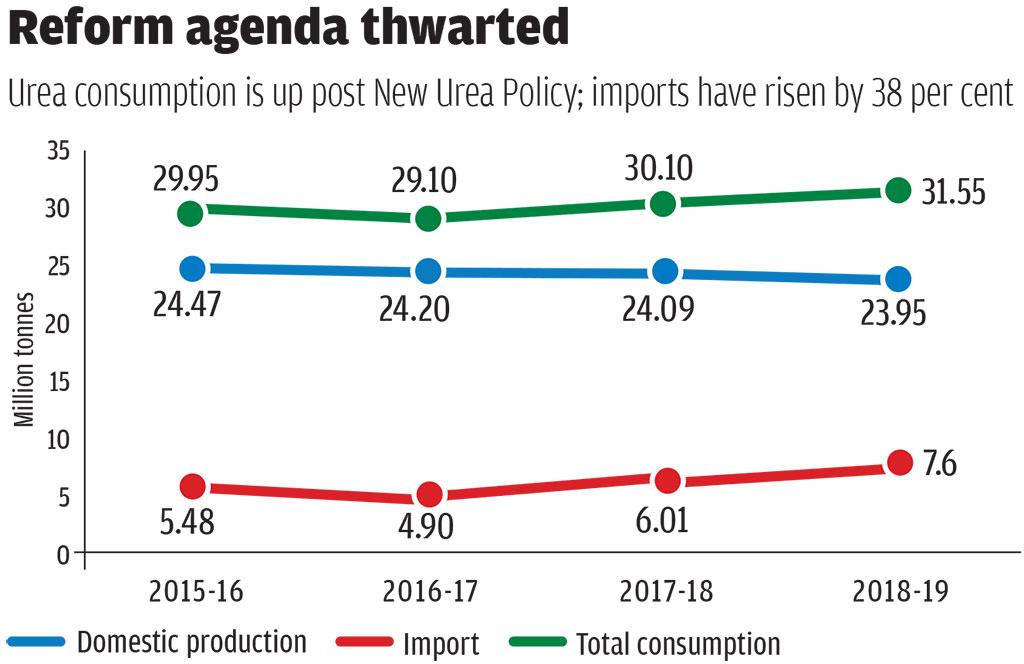 The fertilizer ministry has set a standard for producing neem coated urea, which requires 600 gram of neem oil to be sprayed on 1 tonne of urea. “Going by the standard we require at least 20,000 tonnes of neem oil for coating the 32 mt urea consumed in the country every year,” says Ravindranathan, state president of Neem Oil and Cake Association in Tamil Nadu. “In comparison, only 10 per cent of the 300,000 tonnes of neem seeds collected from across the country gets processed, yielding only 3,000 tonnes of neem oil,” says Ravindranathan. This is a deficit of over 85 per cent, as neem oil is also high in demand for soap-making and other pharmaceutical products. Last year, Ravindranathan wrote to Prime Minister Narendra Modi seeking his attention towards neem cultivation.

Market analysts say this gap in demand and supply is fuelling the growth of spurious products. In April 2017, taking cognisance of spurious supply of neem oil to urea manu facturing plants, the fertiliser ministry had issued a notification, which states: “It has now been brought to the notice of this Department that some Neem Oil suppliers are offering more quantity of Neem Oil to urea manufacturers/importers than their neem oil production capacity which encourages malpractices and mixing of spurious oil in Neem Oil along with Azadirachtin powder (an active ingredient in neem oil). Therefore, in order to ensure the purity of Neem Oil, it is felt that Neem Oil may be supplied to the urea manufacturers/importer as per their production/import capacity of urea only…”

But the notification does not seem to have made an impact on the ground. A Gujarat-based neem coated urea manufacturer who doesn’t wish to be named, tells Down To Earth that manufacturers are freely blending neem oil with other cheap varieties of similar constituency, such as palm oil, cotton seed oil and bran oil. Since all these oils have the same brownish-yellow hue, the final product does not look much different from urea coated with pure neem oil. “This is where the problem lies,” says B N Vyas, president of Mumbai-based non-profit World Neem Organi sation (WNO). Neem coated urea prepared using spurious oils cannot achieve the desired result. Besides, he adds, the 600 gm standard set by the government is too less to improve the potency of urea. Poorly coated urea can neither improve crop yield nor reduce urea consumption. Vyas suggests that the government should urgently revise the standard to 2 kg of neem oil per tonne of urea to save subsidy amount and the environment. 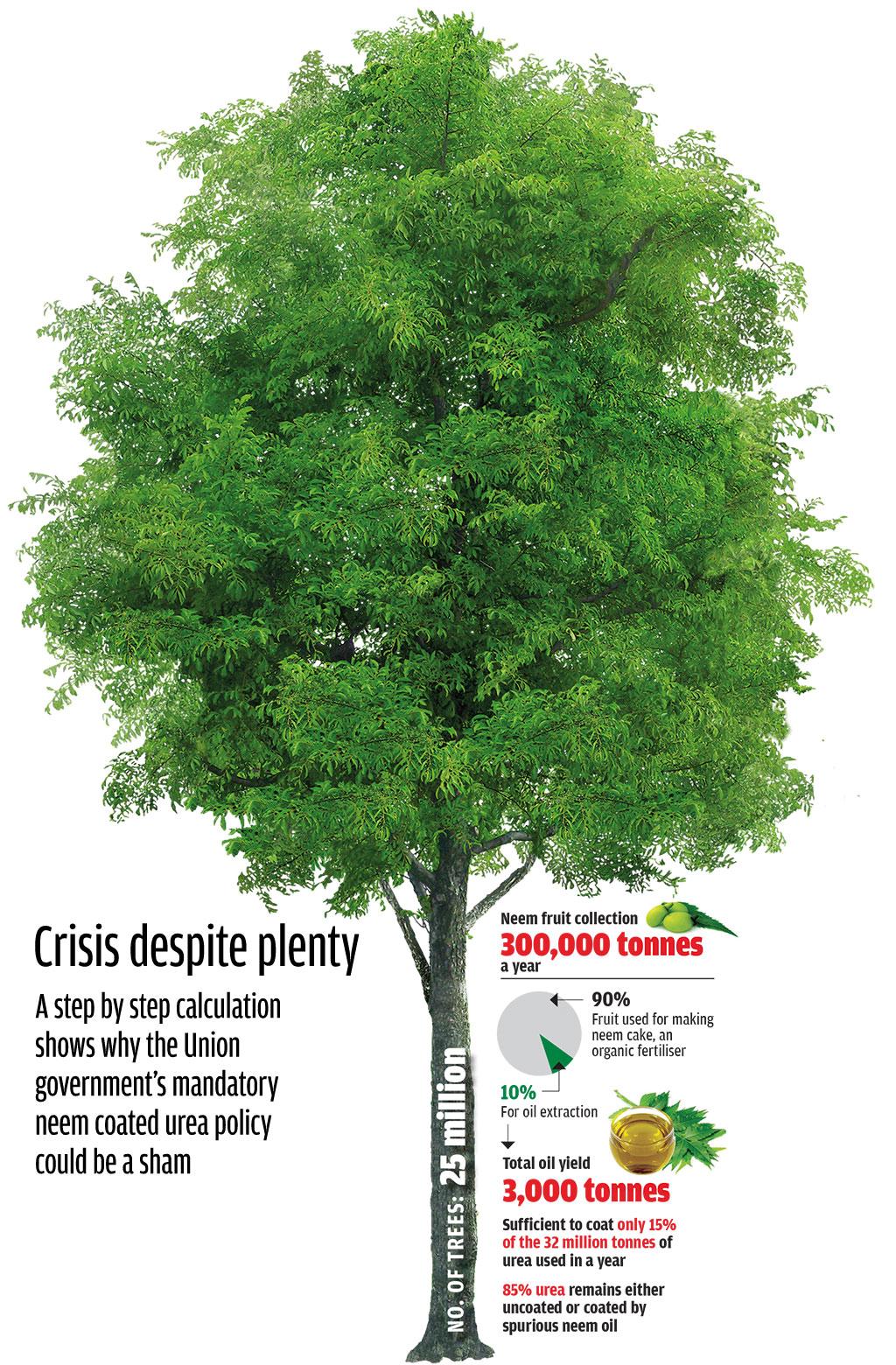 According to WNO, India is home to 25 million neem trees. About 80 per cent of the trees grow as part of natural vegetation in the dry, sub-tropical climate of Uttar Pradesh, Tamil Nadu, Karnataka, Gujarat, Madhya Pradesh and Maharashtra. “But the Indian market is highly unorganised and we are yet to tap even 10 per cent of oil-yielding potential of the trees,” says Vyas.

Consider this. Oil yield from neem fruits can be as high as 8 to 10 per cent of the weight of the fruit. But this requires careful drying of the fruit in shade, storing it and then using cold-pressed technology to process the seeds. Any amount of moisture left in the fruit can significantly alter the oil quantity, explains Ravindranathan. Industry sources say urea manufacturers usu ally rope in non-profits for procuring neem seeds. The non-profits engage communities in turn, but neither train them in collection nor provide them with required infrastructure. This is a major reason for the low oil yield.

Neem oil producers do not find it profitable to supply their product to urea manufacturers. “Neem oil extraction is capital intensive. For producing one litre of oil, we spend about Rs 150 on procuring the raw material and processing it.

Vyas says the problem is primarily because of the government’s apathy towards neem-based industry as well as neem trees. In 1999, for the first time the government launched a national programme on neem and promoted its plantation under the National Oilseeds and Vegetable Oils Development Board. Neem trees were planted in pockets of Karnataka, Rajasthan, Madhya Pradesh, Maharashtra and Uttar Pradesh. In 2006, the programme was replicated in the Northeast as Neem Project II. But officials with the board express ignorance of the trees planted under the initiative. Plantation of neem trees is also going on under the National Afforestation Programme of 2002, the National Mission for a Green India under the Union environment ministry, and under the National AYUSH Mission which supports cultivation of 140 species of medicinal plants. But as the Minister of State in the Ministry of Forest and Climate Change Mahesh Sharma admitted before Parliament in December 2018 “there is no specific programme dedicated for plantation or cultivation of neem”.

The impact of India’s lackadaisical attitude towards the plant, declared the “Tree of the 21st century” by the United Nations has begun to show. China is emerging as a major neem power. Keeping in view the future demand of neem as bio-pesticides, it has launched a project to promote the tree and has planted some 20 million neem trees. In terms of neem-based products, China now accounts for 40 per cent of the global market.

One hopes the government realises the worth of this native tree before it’s too late.

The article was first published in the Down To Earth print edition (dated 16-30 April, 2019)