Future population growth is expected to take place almost entirely in cities. We won't fight climate change without them 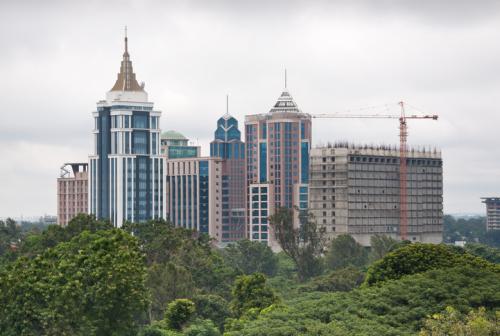 As a planet, we have some serious climate targets to meet in the coming years. The Paris Agreement, signed by 192 countries, set an aspirational goal of limiting global warming to 1.5ᵒC. The United Nations Sustainable Development Goals, set to be achieved by 2030, commit the world to “take urgent action” on climate change.

All this will require ridding our economies of carbon. If we’re to do so, we need to completely rethink our cities.

The UN’s peak climate body showed in its most recent report that cities are crucial to preventing drastic climate change. Already, cities contribute 71% to 76% to energy-related carbon emissions.

In the Global South, energy consumption and emissions in urban areas tend to be way higher than those in rural areas. Future population growth is expected to take place almost entirely in cities and smaller urban settlements. Unfortunately, those smaller centres generally lack the capacity to properly address climate change.

China’s “New-type Urbanisation Policy” aims to raise its city populations from 54.2% in 2012 to 60% in 2020. This will mean building large urban infrastructure projects, and investing trillions of dollars into new developments. Meanwhile, India’s sheer volume of urbanisation and infrastructure needs are phenomenal.

The problem with infrastructure

Infrastructure contributes to greenhouse gas emissions in two ways: through construction (for example, the energy footprints of cement, steel and aluminium used in the building process) and through the things that go on to use that infrastructure (for example, cars or trains using new roads or tracks).

In a recent study, my colleagues and I have shown that the design of today’s transportation systems, buildings and other infrastructure will largely determine tomorrow’s CO2 emissions.

But by building climate-smart urban infrastructure and buildings, we could cut future emissions in half from 2040 onwards. We could reduce future emissions by ten gigatonnes per year: almost the same quantity currently being emitted by the United States, Europe and India put together (11 gigatonnes).

In established cities, we found that considerable progress can be made through refurbishment of existing infrastructure. But the highest potential is offered by construction of new, energy-efficient projects from the beginning.

The annual reductions that could be achieved by 2040 by using new infrastructure is three to four times higher than that of upgrading existing roads or buildings.

With this in mind, governments worldwide must guide cities towards low-carbon infrastructure development and green investment.

Urbanisation is about more than megacities

Significant opportunities exist to promote high-density living, build urban set-ups that mix residential, work and leisure in single spaces, and create better connectivity within and between cities. The existing window of opportunity to act is narrowing over time, as the Global South develops rapidly. It should not be missed.

Besides global megacities such as Shanghai and Mumbai, smaller cities must also be a focus for lowering emissions. Studies have shown a paradox for these places: the capacity for governance and finance are lower in the smaller cities, despite the fact that the majority of future urban populations will grow there, and they will expand quicker than their larger cousins.

We must give up on our obsession with megacities. Without building proper capacity in mid- and small-sized cities to address climate solutions, we cannot meet our climate goals.

Perhaps most important is raising the level of ambition in the existing climate policies in cities of all sizes, making them far-reaching, inclusive and robust. Despite the rhetoric, the scale of real change on ground from existing cities climate actions are unproven and unclear.

Existing cities’ climate mitigation plans and policies, such as in Tokyo, London, Bangkok, and activities promoted by networks such as ICLEI, C40, Covenant of Mayors for Energy and Environment are a good start; they must be appreciated but further strengthened.

But, to further support these good ideas, the world urgently needs support measures for urban mitigation from local to global levels together with a tracking framework and agreed set of indicators for measuring the extent of progress towards low-carbon future.

Only if we start with cities, big and small, will we manage to limit warming to 1.5°C.