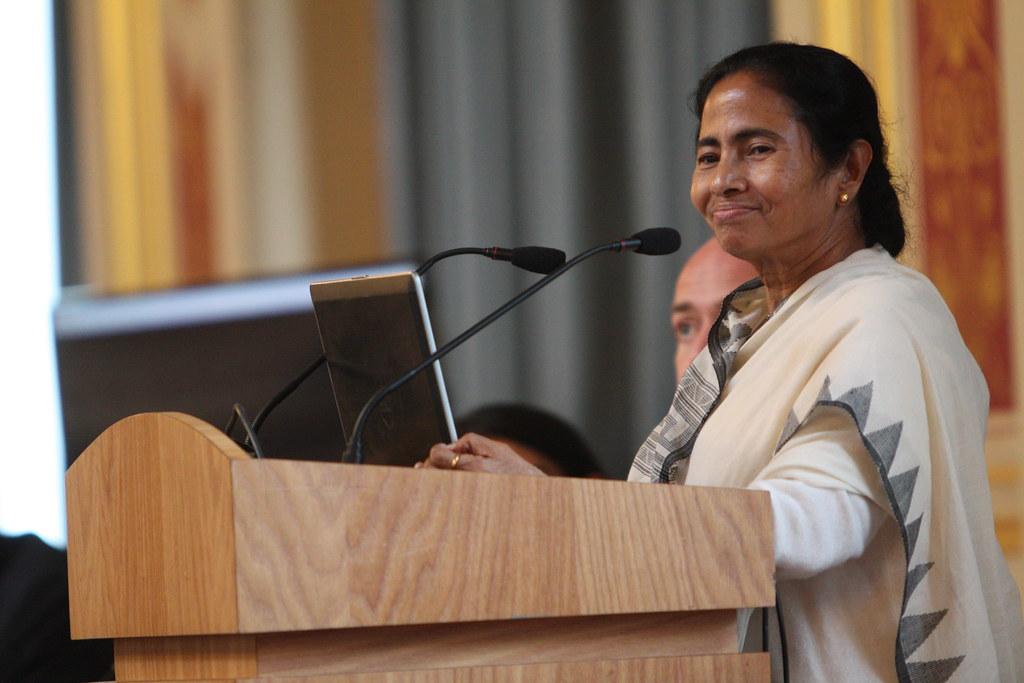 When the Bharatiya Janata Party turned the heat on West Bengal, incumbent chief minister Mamata Banerjee included a slew of development ‘schemes’ along with a political response. Now several experts believe the social-sector schemes, covering citizens from “birth-to-death”, helped her Trinamool Congress majorly in securing a third term in a resounding manner.

Trinamool cornered 47.9 per cent of the valid votes cast — nearly half — drawing in a swing over both the 2019 General elections and the 2016 Assembly polls. The BJP, despite a blitzkrieg of a campaign, actually lost a few percentage points from 2019 to end at 38.1 per cent. Banerjee ended up with 213 seats, two more than she had, in a House of 292.

Few pundits could predict such an outcome, especially after the BJP bagged 18 of Bengal’s 42 Lok Sabha seats in 2019. Many expected anti-incumbency to affect Trinamool after 10 years in power. But the data on development schemes, especially those in the three months leading up to polling, point to a different story.

Trinamool fared unexpectedly well in Murshidabad district, traditionally a Congress bastion, getting 18 out of 20 seats and 53.3 per cent of votes polled.

The district had the highest number of beneficiaries — 2.4 million — of the Duare Sarkar programme (doorstep delivery of government services) launched by state government in December last year, according to state government data.

“Through Duare Sarkar, my family got Rs 9,000 as support meant for peasants, along with widow pension for my mother, which was stuck for a long time. More importantly, the money came directly to my bank account,” said Sibu Haldar, a resident in Kulpi block of South 24 Paraganas.

The programme ensures easy access to social assistance schemes through local camps. A whopping 27.4 million people attended such camps across the state in the three months prior to the elections.

The North and South 24 Paraganas gained the most from the service after Murshidabad, with over two million beneficiaries each.

Trinamool won more than 92 per cent seats — 58 out of 64 — and polled over 50 per cent votes in the two districts combined.

The ruling party’s performance in South 24 Parganas and parts of North 24 Pargana was under cloud as BJP ran a vociferous campaign on Trinamool’s alleged corruption, particularly in distribution of relief during the Amphan cyclone crisis.

“There have been cases of Amphan-related corruption and even the Chief Minister acknowledged it. But the developmental programmes of the government blunted their impact,” said a senior Trinamool leader from Sunderbans.

There are bound to be some complaints of corruption in such gigantic social assistance programmes, but if the majority benefits at the end of the day, they don't count, said Imtiaz Ahmed, professor of international relations in Dhaka University.

If Duare Sarkar gave the final fillip to Mamata’s developmental drive, smooth distribution of Swasthya Sathi cards is considered to be the game changer.

Swasthya Sathi, a free health insurance scheme, was introduced by the state government on December 30, 2016. But the scheme turned into a clincher when Mamata Banerjee extended the facility to the entire population of engal from December 1, alongside Duare Sarkar.

Through March 31, 1.8 million people used the card for free hospital admission, with Bankura leading the count with 160,000 cases, according to state government sources.

“There has been huge demand for utilising Swasthya Sathi cards, with many getting their long-pending operations done,” said physician Partha Pradhan, principal of Bankura Sammilani Medical College, to this correspondent.

Trinamool, which was completely routed in all 12 Assembly segments of the district in the 2019 elections, won four seats in the last Assembly polls.

Family members of opposition leaders were also seen queuing up for these facilities, claimed a senior Trinamool leader.

Focus on women was key

Women voters contributed significantly in turning the tide towards Trinamool, observed analysts. They claimed that the trend is linked with Banerjee’s focus on women in various development programmes.

The voting percentage of women, which was much less than men till the ‘90s, rose since Mamata occupied centre stage in Bengal politics. During the last Assembly elections, a higher proportion of women voted than men.

“Our opinion poll before the election showed that nearly 52 per cent women voters were supporting Trinamool while only 38 per cent supported BJP,” Biswanath Chakrabarty, a professor and poll analyst, told DownToEarth.

Identity politics played the most crucial role in the Bengal election verdict but development programmes, with focus on women, also played an important role, Chakraborty added.

“Sasthya Sathi and Duare Sarkar have been game-changers. But one should not also forget the continuing impact of earlier social schemes like Kanyashree, brought to discourage early marriage or Sabuj Sathi that provided cycles to women students,” said Sibaji Pratim Basu, an academician and poll analyst.

In electoral politics, particularly in assembly elections, recent memory counts. If people trust government programmes introduced in the run-up to elections, it can turn around the fate of the ruling party. If there is lack of trust, it works in favour of the opposition. In this case, people clearly trusted the programmes.

There is no established system of social security in our country, said Sukanta Chowdhury, an academic and social commentator. “So, such programmes, which claim to cover residents from school days to old age definitely count.”

Chowdhury pointed out that the focus on women in various programmes, particularly the fact that the Swasthya Sathi card was given in the name of the senior-most woman in the family, ushered in a sense of empowerment and pride within women. These sentiments catapulting women in favour of Banerjee.

Every time Prime Minister Narendra Modi ridiculed Mamata in a teasing tone during his campaigns, he alienated women, experts pointed out.

“People are talking about ‘Muslim factor’ or ‘outsider factor’ that led to the victory. Developmental factor was no less critical. Even in my constituency Kasba, which is an urban one, people queued up in large numbers for Swasthya Sathi card or the Duare Sarkar programme,” observed Javed Ahmed Khan, a frontline Trinamool leader and a cabinet minister in all three Trinamool governments so far.

For once, BJP agreed.

“Mamata Banerjee was able to overcome the BJP challenge with a last-minute improvement in government services to the poor. This secured her enough incremental votes — particularly in areas where the Muslim population is relatively low — to edge past the BJP,” wrote senior BJP leader Swapan Dasgupta in his recent column.