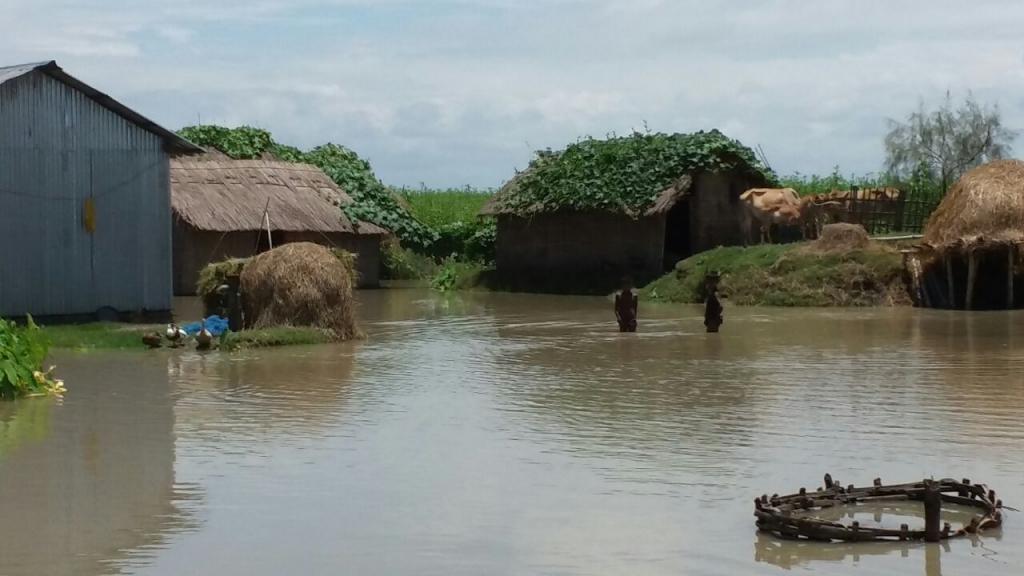 The recent wave of floods in Assam has affected some 1.46 lakh people (Credit: Abdul Kalam Azad)

The flood-prone states in India have not identified or demarcated affected areas in spite of recommendations by multiple committees, a report by the Comptroller and Auditor General of India (CAG) has found. Drainage and embankments are included in the State List in the Constitution, thus implementation of related schemes is the state’s responsibility. The Centre’s role is advisory in nature.

Recommendations of the Rashtriya Barh Aayogh (RBA), which was constituted to identify flood-prone areas to reduce annual damage, were sent to states and union territories (UTs) in 1981, yet many of those have not been acted upon.

One of these was the critical suggestion of identifying flood-prone areas, necessary for devising schemes for alleviation. As of July 2016, nearly 25 years since RBA’s report, only two of the 17 selected states verified RBA’s assessment of flood-prone areas.

As per RBA’s recommendations, this data was to be used for drawing maps of areas affected by floods, and further verify it after field visits. These have, however, not been implemented.

Records of damages due to floods were maintained according to administrative units, rather than category- or basin-wise, as recommended by the RBA.

The National Water Policy of 2012, formulated by the Ministry of Water Resources, specified preparation of digital elevation models and frequency-based Flood inundation maps have not been prepared. The policy also stipulated morphological studies of 301 rivers in the 11 states that lie in the Ganga Basin. This was considered crucial as climate change was likely to increase the rainfall intensity, and hence, soil erosion.

Fifteen of these rivers were to be studied in 2015-16, but only eight were taken up. Although the ministry stated in December 1016 that policies in National Water Policy were being followed, the CAG report does not accept this response. “The reply cannot be accepted as Morphological studies as envisaged in the policy were not completed in any of the States,” it states.

In 1975, the Central Water Commission (CWC) circulated a model bill for flood plain zoning among states for enactment. Flood Plain Zoning demarcates zones or areas likely to be affected by floods of different magnitudes or frequencies the damage can be mitigated. The CAG report observed that only three states—Manipur, Rajasthan and Uttarakhand—had enacted Flood Plain Zoning Acts.

The report further goes to states that if these acts were implemented, the destruction in the 2013 floods of Uttarakhand as well as the Chennai floods of 2015 would be lesser.