Why Jammu’s Jal Shakti daily wagers are on hunger strike

As many as 21,000 workers of the Jal Shakti department (formerly Public Health Engineering Department) claimed to have not received wages in 4 months 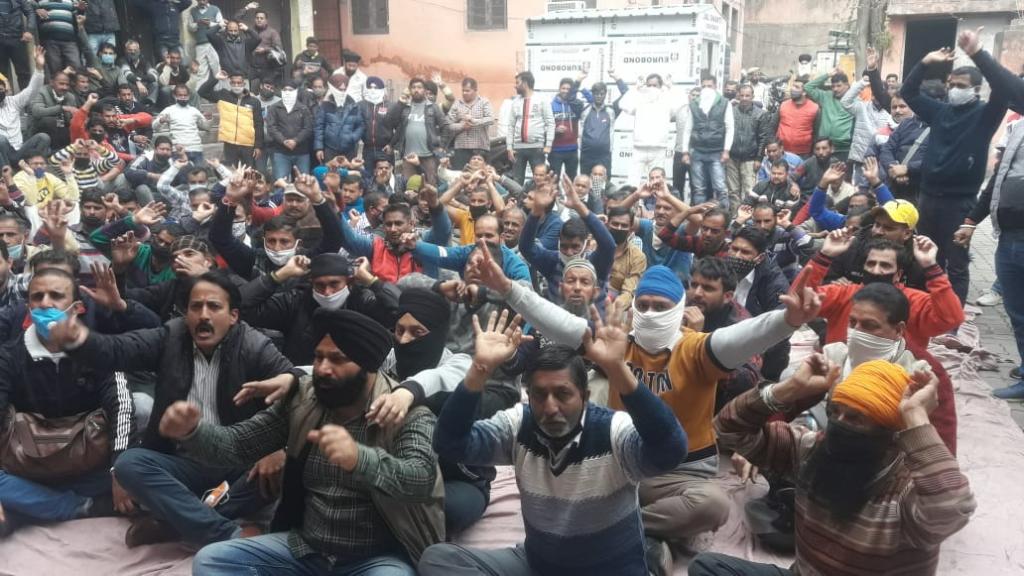 The workers of the Jal Shakti department who are employed on a daily-wage basis have gone on a hunger strike since the last 10 days, demanding pending remuneration and regularisation of those working for over seven years.

As many as 21,000 Jal Shakti daily wagers did not get their salaries last four months, claimed a protesting worker. The workers said that they would soon boycott work if their demands of wages and regularisation are not met.

Mahesh Kumar Bhat, the chief engineer, Jal Shakti department (Jammu division), however, denied allegations of wage irregularities. “There is no salary release issue. We have already paid them 10-month salary for the current fiscal.”

Around 80 per cent of the workforce in the department, which was previously called Public Health Engineering (PHE) department, are daily wagers, according to the labour union PHE Employees United Front. They claimed they take care of most of the work for the department including repair work, logistics and other parts of the water distribution process.

Daily wagers, who are with the department for 15-25 years, are still not regularised, the protestors pointed out.

Ravi Hans, a member of the Union, told to Down to Earth:

On World Water Day, Jal Shakti authorities spent a huge sum of money on celebrations. We are the people who ensure water supply to every house in Jammu and Kashmir and we ourselves are starving. We were not regularised even after ten written agreement with the past and present governments.

The protests have been ongoing intermittently for two years over irregular release of wages.

In the last six years, the department did not pay casual workers their entire remuneration and  any payments of daily wagers are pending for 20 years, claimed a protestor. “Nearly 50 employees died by suicide due to financial crisis and many daily wagers retired without wages.”

Currently, the labourers get Rs 225 per day.

In October 2015, a cabinet sub-committee was proposed to regularise more than 60,900 daily wagers but till March 25, 2021, no regularisation had taken place.

After abrogation of Article 370 in Jammu and Kashmir (J&K), in August 2019, PHE employees were hopeful of implementation of Minimum Wages Act. But nothing changed for PHE daily wagers and their salaries remained irregular.

In December 2020, BJP promised to fulfil the demands of PHE daily wagers after the District Development Council (DDC) election. Later, in February 2021, the president of the state-unit of BJP, Ravinder Raina promised regularisation of daily wagers. But none of the plans came to fruition.

“We are sitting on hunger strikes in shifts and ensuring water supply to every household as we do not want to trouble the citizens. Our protest is against the authorities who betrayed us for many years,” said Navdeep Singh, member of the labour union.

The workers were hopeful to get their wages from the funds allocated Jal shakti department in the Union budget for 2021-22. “We are not able to send our children to schools because our pockets are empty despite working 8-10 hours a day for the Jal Shakti department. Daily wagers in Kashmir are in the same conditions,” Hans said.

Regularisation of old workers is beyond their authority. “The matter is under Lieutenant Governor.” The department will release payment for the remaining months as soon as the government allocates salary fund, he added.