The 120 room, five-star luxury resort is being built in Chikkamagalur district of Karnataka in association with international hotel chains 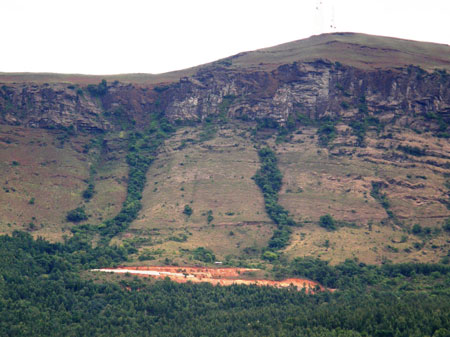 In Chikkamagalur district of Karnataka, a high-end resort is coming up in the pristine shola-grassland ecosystem of the Bababudan mountains. This 120 room, five-star luxury resort is being built by Brigade Group of builders in the little-known village of Arasinaguppe. The venture is in association with international hotel chains, The Banyan Tree Hotels and Resorts and Angsana Resorts and Spa, Singapore. Fourteen hectares of prime habitat has been diverted for the construction. The argument–grasslands are not forest, and the land is not under protected status.

Such scenarios are becoming increasingly common across the country. The growing affluence of the Indian middle and upper-middle class has caused a spurt in market demand for luxury services. Tired city-dwellers look to be pampered in style, in exotic locations, away from the everyday bustle of their lives. With the fast surging market in green holidays, many high-end hotel enterprises are rushing to build comfortable getaways for the weary city-dweller, ready to shell out big bucks for a few days of looking-after. The major selling points for such resorts are their locations and services. Often, these resorts are built in remote areas. They provide opulent residence, in peaceful locations with clean air and the romance of the pristine. Many such resorts come up close to a national park or wildlife sanctuary where they can additionally avail of wildlife safaris.

The ecological implications of such ventures

In a liberal market economy, one would of course ask why, if there is demand, such ventures should not come up. To answer this we must look at the impacts of such undertakings beyond just their economic advantages, one of them being ecological impacts. Most people are unaware of the ecological implications of many such luxury facilities. Often, constructed in remote areas away from human concentration, such facilities invariably lie within or close to forests. The laws for protection of environment and forests prevent such constructions inside protected areas such as national parks and wildlife sanctuaries. Protected areas, however, cover only about four per cent of India’s land. There are wild places that do not have a protected status and may be community lands. None the less, many such areas are of immense ecological importance, and may even lie within eco-sensitive zones of protected areas.

In the case of Brigade Resort in Chikkamagalur, it is located in the biodiversity-rich shola-grassland ecosystem, which is unique to the Western Ghats. The resort lies within 10 km of Bhadra Tiger Reserve, and is on land proposed to be declared a reserve forest. It links Bhadra with the adjacent reserve forests of Churchegudda and Yemmedoddi, and is part of a larger tiger landscape. This area is also an important watershed for the many streams that the villages, plantations, and other local residents downhill depend upon.

The argument of the construction group is that the building operations, being in the grasslands, are confined to “wastelands” and not destroying any forests. Additionally, the area is not protected and therefore does not require any forest clearance. In this backdrop, permissions were granted by the district collector for the diversion of fourteen hectares of gomal or traditional grazing lands for this commercial operation, itself a questionable move legally.

The construction of access roads to the resort has left a rubble trail along a once pristine evergreen shola forest. Excluded from the ambit of evaluation, the bulldozers have done their job well. Dug up earth, torn up trees and blown up boulders have left irreparable scars on a fragile ecosystem. This has been permitted in spite of the fact that sholas harbor some of the most endangered and highly endemic species of birds, reptiles and amphibians. The endangered White-bellied Shortwing, Black and Orange Flycatcher, and the endemic frog Nyctibatrachus dattatreyaensis, are found in this area. Tiger, leopard, sambhar, and muntjac deer, in addition to a variety of other smaller fauna, have also been sighted around the area.

The recent results of the all India tiger estimation exercise have revealed some interesting results. Notwithstanding numbers, the area occupied by tigers in different landscapes across India has diminished by about 20 per cent. In addition, nearly 30 per cent of tigers are estimated to be in areas outside tiger reserves. The newspapers have been loaded with articles of the implications of this finding for future conservation of tigers. The take-home message is–we need to protect corridors.

This case illustrates the increasing diversion of land and resources for tourism, and calls for urgent regulation and management. Construction of such resorts is destroying ecologically valuable and biologically diverse habitats such as the shola-grasslands. They damage vegetation, lead to soil erosion, and hinder movement of wildlife. Tiger reserves and other parks are tiny islands embedded in a matrix of farms, fields, plantations, and villages. It is crucial now to plan land-use of areas falling between protected areas to make them permeable to dispersing wildlife. Given this knowledge, it is imperative to control the diversion of areas that act as vital corridors for dispersal of tiger and other species. In addition, special care should be accorded to areas of high biodiversity and endemism like shola-grasslands. Constructions like the Brigade Resorts in Chikkamagalur are avoidable, and should be evaluated as per their long-term ecological impacts on a landscape.

There is an on-going case in the Karnataka High Court to stop this construction. However, it seems unlikely that the ecological imperatives of the case will be appreciated.