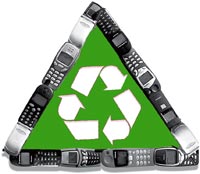 In a ringing endorsement of ecofriendly practices, cellular phone manufacturers signed a declaration at the Sixth Conference of Parties (cop-6) to the Basel Convention on the Control of Transboundary Movements of Hazardous Wastes and their Disposal. Major industry players made a commitment to cooperate with the convention and other stakeholders in the sector on the environmentally sound management (esm) of end-of-life mobile phones. The meeting was held in Geneva in December 2002.

cop-6 responded to the unprecedented move by mandating a small group of experts from among the interested parties to discuss the terms of reference and prepare a draft work programme. It also instructed the convention secretariat to initiate projects involving the Basel Convention Regional Centres, wherever appropriate and subject to the funds available.

The initiative involves the United Nations Environment Programme (unep), the Basel Convention, the government of Switzerland and 10 manufacturers of cellphones including lg, Matsushita (Panasonic), Mitsubishi, Motorola, nec, Nokia, Philips, Samsung, Siemens and Sony Ericsson. "Companies are an essential part of the solution, and this expression of willingness by manufacturers should serve as an inspiration for other business sectors," avers Klaus Toepfer, executive director, unep.
Mobile phones contain persistent bioaccumulative toxins (pbts) such as arsenic, antimony, beryllium, cadmium, copper, lead, nickel, zinc and brominated flame-retardants that are known to pose a threat to the environment. According to a study by Inform, a research organisation based in the us, pbts are also associated with a rash of health problems such as damage to the nervous system, reproductive and developmental ailments, cancer and genetic disorders.

That the risk is widespread is evident from the soaring popularity of the gadget. One billion cellphones were in use worldwide and about 400 million had been sold globally at the end of 2001, reveals the Inform report. By 2005, as many as 130 million mobile phones weighing 65,000 tonnes will be retired annually in the us alone.

esm requires that all practical steps be taken to minimise the generation of hazardous wastes. It aims to protect human health and the environment by controlling the storage, transport, treatment, reuse, recycling, recovery and final disposal of such waste. The process commences with the collection of mobile phones from consumers and includes their being despatched for recycling. The phones and batteries are then recycled to recover metals and low-grade plastic that can be used again. The hazardous materials are treated separately and disposed of in landfills.

Most of the top companies already have "take-back" schemes in place that encourage customers to discard their used or old cellphones, batteries and accessories by utilising designated recycling bins. Nokia has more than 200 such facilities in nine countries in the Asia-Pacific region, including India. "The phones collected from this region are sent to the recycling plant of Citiraya (Nokia's partner) in Singapore," discloses a Nokia spokesperson, and adds: "There, the mobile phones are treated along with other electronic waste."
Although cellular phone companies have taken a step in the right direction, there are larger issues to be considered when dealing with hazardous wastes generated by electronic gadgets.

product design: Ravi Agarwal, a cop-6 delegate and the director of New Delhi-based non-governmental organisation Toxics Link, welcomes the initiativebut feels that the problem should be addressed at the production stage itself: "In the long run, it is essential that these companies change the designs of their products to reduce toxic substances. This would enable us to move in the direction of waste minimisation rather than just waste management."

dumping of e-waste: With disposal becoming a tough proposition in developed countries due to stringent legislation, toxic waste is being shipped to developing countries where environmental laws are lax. Agarwal observes, "Electronic goods at the end of their life, like other products, find their way into developing countries as second-hand goods or donations on the pretext of being useful." Soon they degenerate into waste. The end result: the North becomes cleaner at the cost of the South.

extended producer responsibility: This is an environmental policy approach wherein a producer's responsibility, physical and/or financial, is extended to the post-consumer stage of a product's lifecycle. Bharati Chaturvedi of Chintan, an environmental research and action group in New Delhi, opines: "Looking at them as mobile phones or e-waste is not the solution because technology is moving faster than legislation. One, therefore, needs to address the issue in terms of extended producer responsibility."

Even as a few developed nations are moving towards epr, a lot more needs to be done in the light of the problem acquiring a global dimension. It must be ensured that the responsibility of the developed countries is extended to developing country markets as well.