Cold storage trucks are important to ferry food. A new British technology would use liquid air to power truck refrigeration units. But is it carbon-free? 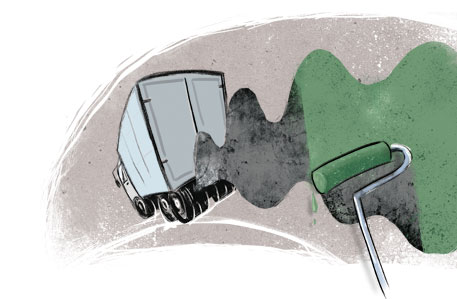 Since antiquity, food items have been transported from place to place. But never at the speed or in the variety or amounts seen in the past few decades. Twenty-first century consumers expect food whenever they crave it, with no concession to season or geography. Catering to their demands are trucks with refrigeration units that carry perishable freight like vegetables, fruits, meat, milk and fish at specific temperatures via roads. But this comes at a huge cost: diesel, which powers the truck, emits greenhouses gases and hydrofluorocarbons (HFCs), used as a coolant, have very high global warming potential.

While figures for the emissions released by refrigerator trucks are not known, the entire refrigeration and air-conditioning sector contributes to 8-10 per cent of total global green house gas emissions. A variety of options are thus being developed to reduce emissions from refrigerator trucks. One such alternative is to use cryogenic fuels, which are gases liquidified at very low temperatures. The fuel is typically used in spacecrafts and results in zero carbon emissions. 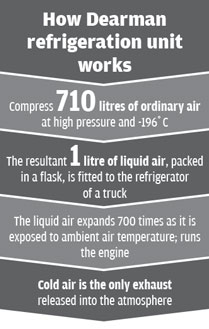 “A liquid air-fuelled transport refrigeration unit could not only reduce diesel consumption by up to 20 per cent but also eliminate harmful nitrogen oxides and particulate matter from the refrigeration process,” says Caroline Teck, spokesperson for Dearman. “CO2 emissions and operational noise would also be significantly reduced.”

Non-profits have given a red carpet welcome to the technology. Fionnuala Walravens, senior campaigner, Environmental Investigation Agency (EIA), a non-profit in the UK, says the technology is “promising” as “it avoids the need for HFCs”.

The concept of using cryogenic fuels as a clean fuel is not so new and revolutionary, and has been in discussion for long, says Lambert Kupijers, co-chairperson of Refrigeration, Air Conditioning and Heat Pumps Technical Options Committee, 2010 of Montreal Protocol. The Protocol is an international treaty designed to protect the ozone layer by phasing out substances, including ozone-depleting coolants (see ‘The gas game’, Down To Earth, September 16-30, 2013). According to the report of this committee, “Cryogenic fuel-based refrigeration systems offer low noise, reduced maintenance and outstanding refrigeration performance (fast pull-down), which make them excellent systems for vehicles serving local distribution chains.”

But are cryogenic fuels really so innocuous? An analysis by Delhi-based non-profit Centre for Science and Environment (CSE) shows otherwise.

Dirty past of cryogenic fuels

Emission factor for a fuel is the amount of CO2emitted while producing and burning one unit of fuel. Though the emission factor for certain fuels, such as diesel and petrol, are pretty much constant across the world, because of their standard extraction process, the factor varies quite a lot for electricity and depends on whether it is generated from thermal power plants or by using renewable sources. So every country has its own emission factor for electricity, based on the percentage of renewable contribution to the country’s power need. 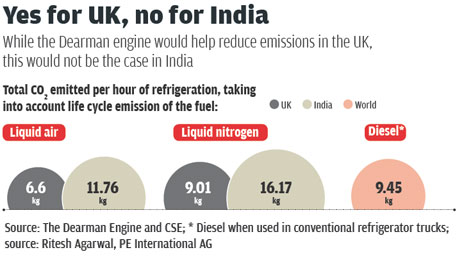 Dearman is interested in selling the trucks to India. Although it has admitted that the technology is not viable for Indian conditions, it says it is pinning its hopes on the future as it foresees economies moving towards renewable energy. Even then, Dearman may not find a lucrative market for its trucks in India. Unlike the Western world, refrigeration for preservation of food is not a popular practice in India. For instance, in the West, meat is processed, refrigerated and transported, while in India, cattle are transported alive and then slaughtered to prepare meat for cooking. Vegetables are mostly consumed locally.

Ashok Mirchandani, managing director of Carrier (Asia Pacific), says, India has a lot of scope for developing cooling technologies. Developed countries have around 1,500 refrigerator trucks per million population, West Asian nations have 300, Latin American countries have 100 to 150, China has 20 whereas India has only five, he adds. According to industry estimates, approximately 104 million tonnes of perishable produce is transported between cities in India each year. Of this, only 4 million tonnes is transported by refrigerated mode.