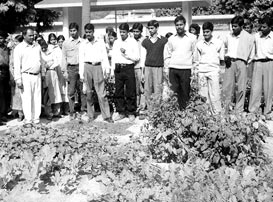 if you visit village Amol Kalan Paschim, you are sure to be served highly nutritious water spinach (Ipomoea aquatica), kaseru (Scirpus kysoor), winged beans (Psophocarpus tetragonolobus), guar phali (Cyamopsis tetragonolobus) and sehjan (Moringa oleifera). About 20 kilometers away from Lucknow, it has been adopted by the National Botanical Research Institute (nbri) as part of its project to create awareness about nutritious vegetables: villagers grow these in their kitchen gardens, and no longer need to buy from the market.

Funded by the department of science and technology, the programme took off in April 2003. Initially promoting singhara (Trapa species), the project grew when other seasonally significant vegetables were added. The first round of training, in December 2003, saw 25 housewives deciding which vegetables to grow. The benefit had to be two-fold: the food grown had to have high nutritional value. The focus was also, says Kamla Kulshreshtha, scientist, Eco-education Division, nbri " to grow seasonal plants which are easily and locally available." As part of the project, nbri has developed 'theme gardens', a kind of showcase of vegetables, fruits and herbs in the institute campus people can visit. Says P Pushpangadan, director, nbri , "It is essential for health to consume only seasonal foods, as nature intended. For example, eating cabbage the whole year round is not good. The plant takes up heavy metals such as cadmium and chromium from the soil. Eating it in summers is safe as one sweats a lot and the metals are thrown out. If the same is eaten in winters, when sweating is rare, the metals accumulate in the body."