How a nutrition programme is helping a Rwanda village overcome malnutrition

Under the Gikuriro Project, 336 households in Muhoza village do not have a single undernourished child as of now

The kitchen gardens are being run in 343 villages of the total 350 villages in the district. Credit: Vibha Varshney

We reached Muhoza village of Nyarugenge district in Kigali city, Rwanda, by around 3 pm — later than the appointed time. The children at the Village Nutrition School (VNS), where we were taken, had already started eating. A team of journalists, part of a media workshop organised by the Centre for Science and Environment (CSE) and MESHA Kenya, were present there, trying to understand what Rwanda was doing to tackle the problem of malnutrition.

We were informed that the food served to the children was produced in the kitchen gardens of the village households.

Under the Gikuriro Project, a nutrition programme which has received funding from the United States Agency for International Development (USAID) for five years, the kitchen gardens are being run in 343 villages of the total 350 villages in the district.

As a practice, the women get whatever is available in their garden, and a ‘model parent’ at the VNS combines all the produce to cook a healthy meal. This way, each child gets a well-balanced diet even if his or her family did not grow all the ingredients, and the mothers learn how to cook a nutritious meal.

Among those who have benefited from the programme is 3-year-old Kevine. His mother Francine Uwambajimana says that she used to feed him potatoes and beans and believed that he was well-fed. But when he was weighed at the school, he was found to be malnourished. At the age of two-and-a-half years, he weighed just 7 kg. 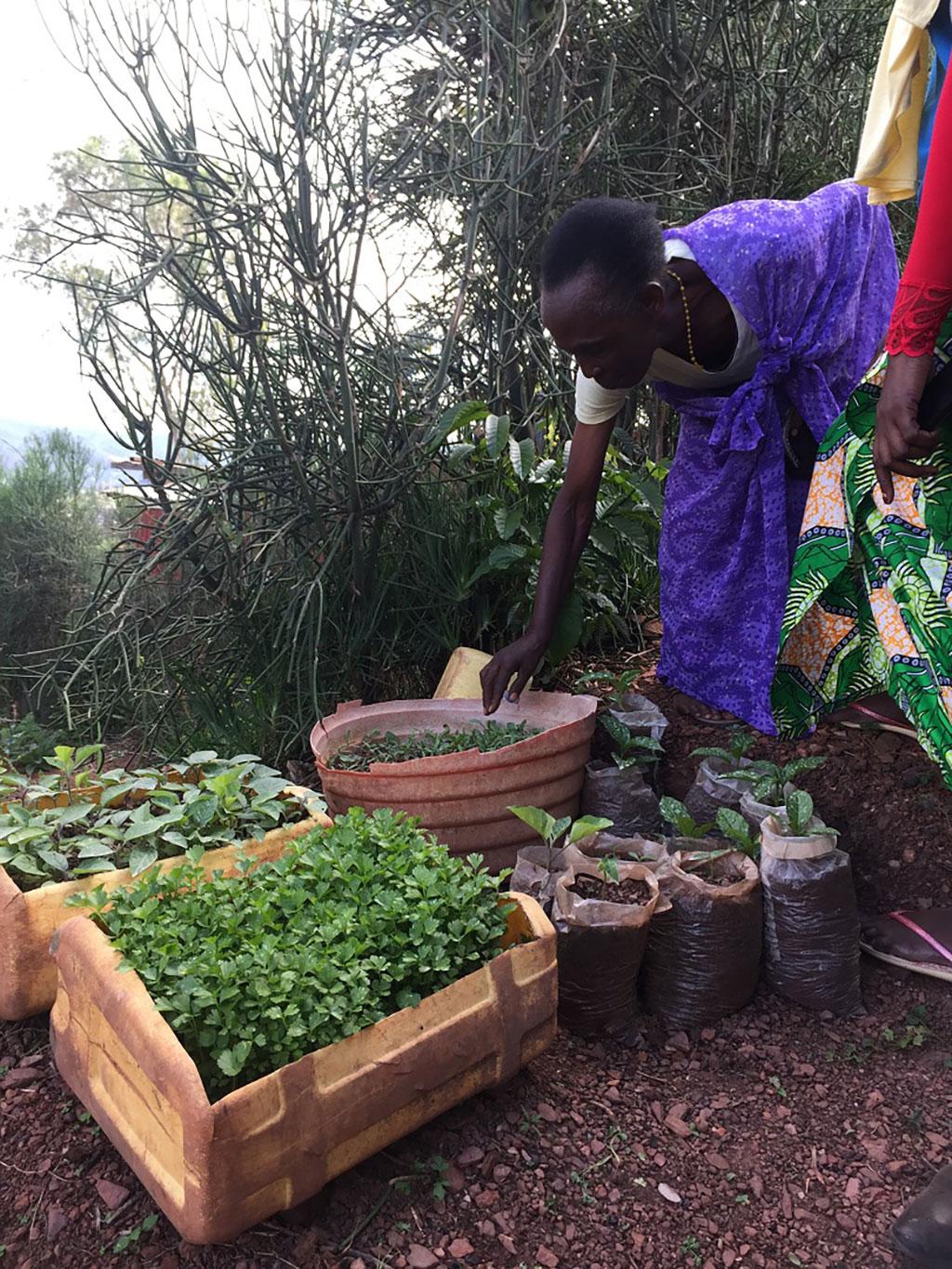 At the school, the children are initially provided with the healthy meal for 12 days. If the status does not improve, they are given another round for 12 days. If the poor indicators still continue, further tests for the malnutrition are conducted. In Kevine’s case, after 12 days, he improved. “At the age of 3 years, he now weighs 14 kg,” Uwambajimana beams.

The 336 households in the village, with a total population of 1,800, do not have a single undernourished child as of now. Health workers visit the school every Thursday to record the weight and upper arm circumference of children. The programme has now entered its fourth year. “Before the programme, malnutrition was rampant in the village. When the programme came, we embraced it,” said Dative Mukamudenge, member of Gikuriro group and coordinator of National Women’s Council.

The responsibility of the kitchen garden is with the women, who are assisted by the Farmer Field School. The in-charge of the school, Prumien Muyyanama, trains them in various techniques to ensure that even the smallest area can be utilised. These include techniques like cone gardens, where mulching is used to protect soil and retain water which is important considering that water is scarce. Another method, specifically suited to the mountainous terrain of the village, is to cut out steps and cultivate on them. The Farmer Field School also provides the seeds for cultivation.

To ensure better nutrition, orange potatoes are cultivated and instead of just the tuber, leaves are also consumed. The families also grow aubergines, onions, piri piri, iron beans, spinach, amaranth and beet root. They are taught about crop rotation, benefits of organic manure and herbal pesticides. People choose the technique that suits their household the most. For example, 70-year-old Domina Mushashi has converted the mountainous terrain around her house into a terrace garden. 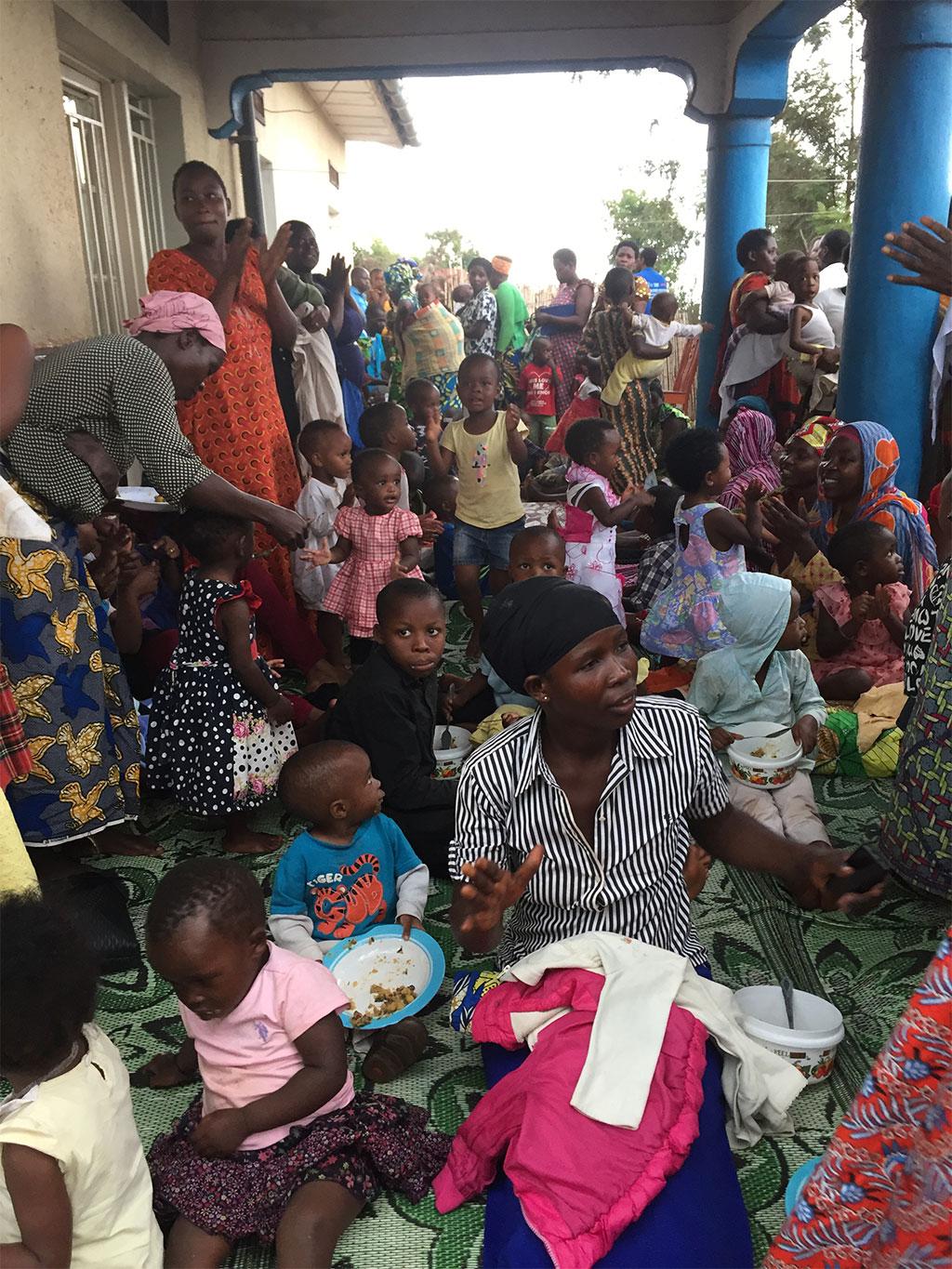 “We want to continue the VNS as we do not want to go back to the earlier situation,” says Mukamudenge. “Through kitchen gardens, we increase dietary diversity and meal frequency. Children who are in moderate malnutrition state are rehabilitated within the community. At present there are no moderate or severely malnourished children in the village,” says Yvonne Umurungi, deputy chief of Catholic Relief Services, which is implementing the programme in the village.

The benefits of the programme do not end here. Twenty-five women from the community have started the Saving and Internal Lending Company (SILK) to give loans to those who need it. Evangelique Niwenyina explains how the system has helped her. She took a loan from SILK to buy two pigs. They gave birth to 10 piglets, which she sold to begin her own garden. “Now, I do not need to ask my husband for money for food and he is happy with me as I can cook whatever he wants using the ingredients from the garden,” she says.

“The programme has changed the behaviour that affects the nutrition status and not poverty,” says Umurungi.

The Global Nutrition Report 2018 says that Rwanda is facing two forms of malnutrition — anaemia and stunting. Not much progress has been made to tackle the underweight issue in children under five years of age. In such circumstances, kitchen gardens can help improve the indicators.