The country, which has the largest number of people defacting in the open, needs to frame a safe toilet technology and treat its faecal sludge, say experts

Jousha Madaki, the 60-year-old headman of Passo village in the Federal Capital Territory of Nigeria looked worried about the increasing number of diarrhoea cases in his village.

Almost 50 per cent of the households in the village have toilets. Essentially, these are drop holes without slabs. A few households have access to shared toilets, which are not maintained. Three-four years back, the village residents were made aware about building and using the toilets. They were told that they could cut down drastically on their health expense by using toilets.

Lamitaiger, a 30-year-old mother of three said the residents usually spent almost 4,000-5,000 every time their children went out to defecate. This came to about 3-4 times in a year. That was too expensive for us, said 60-year-old Ayuba, who is second-in-command in the village. “On an average, people here earn only 8,000-9,000 Naira per month,” he added.

But the construction of the toilets did not provide relief to the residents. That is because most of the pits are now full. The cost of emptying them is 150,000 Naira, whereas the residents earn around 100,000 Naira annually, said Hamza Suleman, a 30-year-old farmer.

He added that the residents had closed the pits and had started going out again to defecate. The buried, undigested faecal sludge in the pits had become a breeding ground for flies, the residents said. The undigested sludge had even affected the groundwater — the only source of drinking water.

The residents complain of contaminated groundwater causing diarrhoea, mostly during the wet season, as the village solely depends on shallow borewell water for drinking. During the rains, the local medicine shop sells almost three times more medicines used for treating water-borne diseases than what it sells otherwise, the doctor and owner of the medical shop, Chindu, said.

Nigeria has now been identified as the country with maximum number of open defecators. The government’s own report, the WASH National Outcome Routine Mapping (WASH-NORM) survey of 2018 says that around 47 million Nigerians practice open defecation. Not only do households, but 40.3 per cent of schools too do not have any toilet, the same report says.

The country needs to speed up the construction of safe toilets and also manage faecal sludge on a war footing. The Joint Monitoring Programme report published jointly by the United Nations Children’s Fund and the World Health Organization in 2019 says that almost 70 per cent of the rural household and 44 per cent of urban household toilets have never emptied excreta from their onsite facilities in Nigeria.

The WASH-NORM report of 2018 says that faecal sludge has never been emptied from more than 50 per cent of the household toilets; around 26.5 per cent people do not have any clue as to where the sludge was disposed after they emptied the toilets.

This is practiced more in urban areas than in rural areas (see Treatment/disposal and emptying of faecal sludge in rural and urban areas of Nigeria). It is also seen that in rural areas, most households did not have a clue as to where the sludge was emptied.

Charles K Ikeah, the director of Pollution Control and Environment Health at Nigeria's Federal Ministry of Environment says that such unplanned dumping of sludge can cause health disasters very often by contaminating the soil and groundwater. 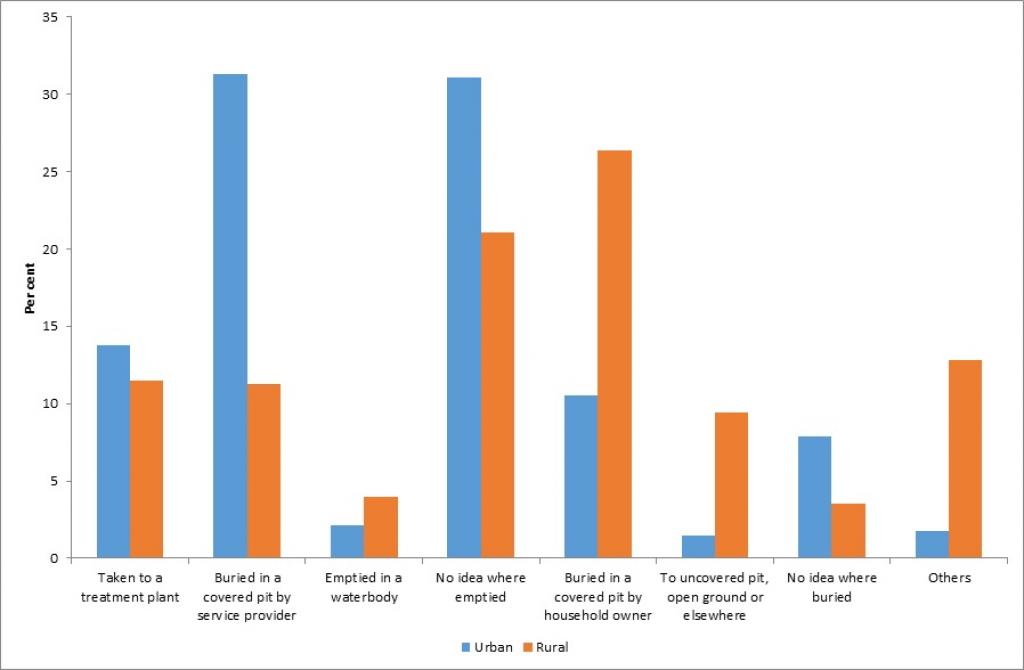 If the (mis) management of the faecal sludge is analysed zone wise, it is seen that the sludge is emptied by service providers or household owners depending on their wealth status. In the southern zones of the country, it is seen that most households did not know where the sludge went while in most northern zones, households buried the faecal sludge in covered pits. This may be due to the fact that the population in the northern zones cannot call a service provider to empty the tanks and pits due to unavailability of funds (see Process of emptying/disposal and treatment of faecal sludge in different geopolitical zones of Nigeria).

As a result, wastewater is dumped directly into waterbodies.

For example, the Lagos state generates around 1.4 trillion cubic centimetres of wastewater. Septic tanks in the densely-populated areas of the state like Badagry, Mushin, Oshodi, and Ikorodu are in a state of despair, which has resulted in groundwater contamination according to the Journal of Sustainable Development, 2016.

Bukar Tijanni, vice chairman of Mabushi Toilet Owners has helped the people of Mabushi, an unauthorised settlement to get a few pit toilets, which are shared by the residents. But this is just a part of the solution, explains Tijanni. Huge amount of black water still flows in open drains across the area, causing health crises.

The country should think of safe toilet technology and also have a plan for the treatment and reuse of faecal sludge, Chichi Aniagolu-Okoye, country director of Water Aid Nigeria, said.