A treaty to block cheaper drugs

Developed countries to use a geographical advantage to stop generics 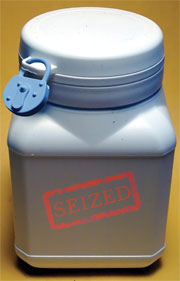 SEVERAL industrialized countries are negotiating a treaty that could deny developing countries access to low-cost medicines, making them dependent on expensive patented drugs.

The pact is very likely to go further than the World Trade Organization’s (WTO’s) trademark- related arrangements by branding any item suspected of violating patents as counterfeit.

Global bodies like the World Health Organization (WHO) and the WTO work on varying definitions of counterfeit. WHO deems all drugs with “wrong ingredients, wrong amounts of ingredients or fake packaging” as counterfeits. For WHO, it does not matter if such versions are generic or patented. The WTO, in contrast, is concerned with trademark infringements. Its Trade Related Aspects of Intellectual Property Rights (TRIPS) has objections against trademarks that “are confusingly similar but not identical”. Generics often get a rough treatment from TRIPS because they draw their name from an ingredient which already has a patented version. But even TRIPS does not deem generics as counterfeits.

The US, EU, Japan, New Zealand and Australia are trying to extend the definition of counterfeit to mean any intellectual property rights (IPR) infringement. T C James, director at the Union ministry of commerce and industry’s IPR division, explained IPR issues on the anvil of these countries. “Under the Anti-Counterfeiting Treaty Arrangement (ACTA), a product could become counterfeit if there is a patented version in just one country. It won’t matter if the generic is legal in the country of production or import.”

James added industrialized nations have got Kenya to pass an anti-counterfeiting legislation. Morroco, Mexico and Singapore have similar pieces of legislation. “If an item is patented in, say the Vatican, the generic becomes counterfeit in Kenya,” James explained.

A multi-lateral anti-counterfeiting treaty would make transport of Indian generics to Latin America almost impossible because countries with anticounterfeiting law, or those negotiating such laws have a geographical advantage. Between themselves, Mexico, US, Japan, Singapore, Australia, Morroco, Kenya, EU nations, corner ports along all major trading routes between India and Latin America.

In fact, we already have a taste of things to come. In 2003, EU countries ammended their national laws to make them amenable to patent holders. So customs officials in these countries can seize goods in transit on the complaint of a patent holder.

In the past seven years, Indian generics headed for Latin American countries have been regularly seized while in transit at European ports. Last year, custom officials at Dutch port city of Rotterdam seized the Indian-made generic Losartan—used to treat high blood pressure—while it was headed for Brazil. Losartan is not patented in either India or Brazil and WTO’s dispute panel is currently hearing India’s appeal against the confiscation.

India’s case gets strength from a 2009 ruling in a UK court, which cancelled the confiscation of mobile phones by UK customs. The authorities had acted on a complaint by the mobile phone major, Nokia. But the court went by TRIPS and ruled that intransit items cannot be seized even when proved fake.

Raghu Cidambi who advises the country’s premier pharmacists’ association, the Indian Pharmaceutical Alliance, on intellectual property issues believes TRIPS did not measure up to the demands of multinational pharmaceuticals. So, they pressured governments on anti-counterfeiting measures. ACTA could surpass the current intellectual property regime in another way. Under TRIPS, courts access the validity of a patent before ruling in favour of a patent holder. “Courts have to balance the right to access to medicine versus an individual’s patent rights. ACTA will mean an end to such discretion,” said Leena Menghaney of the Medecins Sans Frontieres’ Campaign for Access to Essential Medicines. The proposed anticonfiscation agreement will bind courts to stop production and distribution of generics even before the patent’s validity is proven.

The anti-counterfeiting treaty could also require courts to freeze accounts and seize property of the suspected patent violator. “It will be a good way to intimidate everyone into using only patented products,” Menghaney added. Developed country governments have taken other measures to curb the traffic in generics. In 2008, they got the world’s apex postal service body, the Universal Postal Union, to identify and stop the movement of products suspected of patent violation. So if one orders generic drugs over the Internet, the postal service is bound to stop them as counterfeits.