Acquired shortage: India’s HIV drugs are in short supply, which could have been averted

This risks undoing India’s hard-won gains against HIV/AIDS and further derails the global progress, which is not on track to meet the goal of ending AIDS by 2030 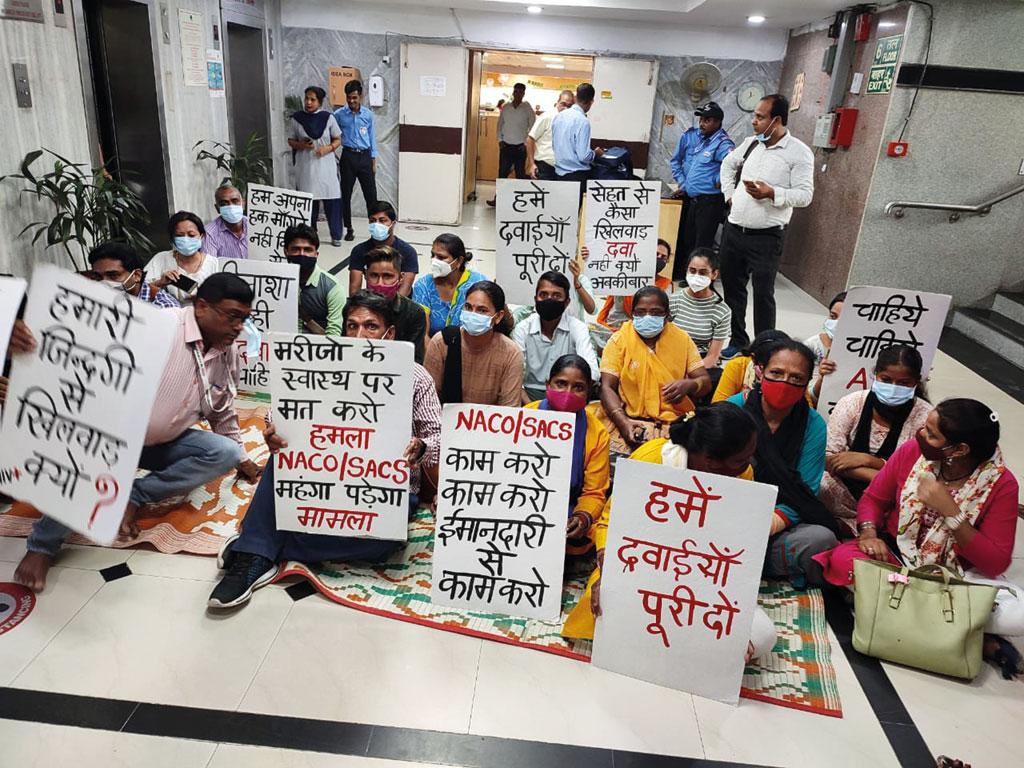 Claiming a shortage of antiretroviral drugs, HIV patients have been protesting since July 21 outside the National AIDS Control Organisation office in Delhi (Photo: Hari Shankar Singh)

The past few months have been particularly tumultous for Jaiprakash. The 44-year-old resident of Delhi is infected with HIV or the human immunodeficiency virus (HIV), for which there is no cure or no vaccine.

So Jaiprakash, like most other HIV patients — an estimated 40 million people are living with HIV globally, as per the World Health Organization (WHO)— depends on a cocktail of drugs to supress the viral load in his blood.

The drugs, known as antiretroviral therapy (ART), delay the the progression of the infection into acquired immunodeficiency syndrome (AIDS) and result in fatal consequences.

In June, Jaiprakash’s doctor changed his treatment regimen to help him better fight the infection. But the art centre run by the National AIDS Control Office (NACO) for providing free medicines, diagnostic kits and other essentials for those in need, did not have stocks of the prescribed drugs.

“Of the three drugs prescribed, the healthcare provider at the art centre gave me only abacavir and lamivudine, that too the paediatric versions. I now take 10 tablets a day instead of one,” Jaiprakash told Down To Earth (DTE).

To obtain the third drug, dolutegravir, which WHO recommends as the “preferred first-line treatment” because of high efficacy and fewer side-effects, Jaiprakash took a desperate step in July.

“Through our support network I learnt that an HIV patient at Delhi’s Lok Nayak Jai Prakash Narayan Hospital, who was on the same treatment regimen, died. His drugs were thrown in the garbage bin and I retrieved them,” he said.

Jaiprakash knows that the drugs retrieved from the garbage are not going to last long. So since July 21, he has joined about 40 other HIV and AIDS patients in protesting the shortage of ART drugs at NACO’s office in New Delhi.

Latest data with NACO, which works under the Union Ministry of Health and Family Welfare, shows that of the 2.31 million people living with HIV in India, 1.4 million receive free treatment from its 680 ART centres located across the country.

“Earlier, these centres used to provide medication for one or two months at a time. But things have changed since November 2021. Now, we barely get enough for a week,” Manoj Pardeshi of the National Coalition of People Living with HIV in India, a non-profit network, said.

Hari Shankar Singh, a member of the Delhi Network of Positive People (DNP+), another social service group for HIV patients, estimates that the drug shortage affects 150,000 HIV patients in the country.

Around a week after protests began at NACO’s office, Union Minister of State for Health Bharati Pawar in response to a question in Parliament said  there is no shortage of antiretroviral drugs at the state level.

Her claim was echoed by the official Twitter accounts of State AIDS Control Societies (SACS) in Goa, Bihar, Delhi, Punjab, Chandigarh, Uttar Pradesh, Meghalaya and Tripura on August 1 and 2. SACS are autonomous and decentralised bodies that implement the NACO programme in states.

NACO did not respond to DTE’s queries on ART shortage till the magazine went to print. Information collected by DNP+ from other HIV groups across the country, however, suggest that since November 2021, dolutegravir is either out of stock or in short supply in Assam, Bihar, Haryana, Jharkhand and Himachal Pradesh.

This is not the first time the country has faced a shortage of this scale; similar instances occurred in 2014 and in 2017-18. The reason in both cases was a delay in the process to award tenders to companies to supply the drugs. This appears to be the cause even now.

“A tender is typically floated when NACO and its centres are left with stock for six months,” Leena Menghaney, a lawyer who works on HIV, said. The latest tender was first floated on December 9, 2021, but was cancelled in January this year because of undisclosed problems with the shortlisted company, Menghaney said.

Another tender was floated in March, but contracts are still in the process of being awarded. “It will then take a few more months for drugs to reach ART centres,” she said.

SACS officials in Manipur and Maharashtra tell DTE that in April, NACO asked states to procure medicines on their own. “So far, we have procured medicines from other states and taken the help of humanitarian organisations,” the Manipur official said on the condition of anonymity.

Although the state is not facing an acute shortage, medicines are running low, with some stocks set to expire. Officials are forced to compromise, for example, by portioning drugs meant for adults and giving them to children, the official said.

The SACS official in Maharashtra, who also wishes to remain anonymous, said the state has arranged stocks for three-and-a-half months through donations and expects an additional three months’ supply soon.

“NACO has assured us of more stocks by the end of August or the first week of September,” the official said. On May 30, NACO’s deputy director general Anoop Kumar Puri issued a letter recommending that states switch to an “alternative regimen” to “tide through the crisis situation as an interim arrangement”.

On the ground, patients like have begun to feel the impact of drug shortage. Umesh Pandit, a resident of Begusarai, Bihar, living with HIV, was prescribed second-line ARTS in 2018 after developing resistance to the first-line medication.

But he has not received any medicine for the past three months and has during this period suffered from spells of high fever accompanied by constant cramping in the legs and feet.

“I have not gotten tested yet, so I do not know if my viral load has increased,” Pandit, a daily-wage worker, said. But frequent bouts of illness means he has not been able to work and even earning the occasional Rs 400 per day is difficult.

“Daily-wage workers lose more income now, as they have to frequently visit ART centres to get a few days' worth of medicine,” Pardeshi, said.

If not addressed in time, the drug shortage could result in a full-blown public health concern.

According to NACO, any irregularity in following the prescribed regimen can lead to resistance to HIV drugs, and therefore can weaken or negate its effect.

“If ART is not taken daily the probability of infection building up in the body increases, making the person unwell and infectious,” Preeti Kumar, vice president at the Public Health Foundation of India, a public-private initiative that focuses on strengthening health infrastructure, said.

This risks undoing India’s hard-won gains against HIV/AIDS and further derails the global progress, which is not on track to meet the goal of ending AIDS by 2030.