Age at marriage in India: A gossamer of complexities and intricate linkages

India is the home to largest number of child brides. Nearly 27 per cent women aged 20-24 years were married before attaining 18 years of age 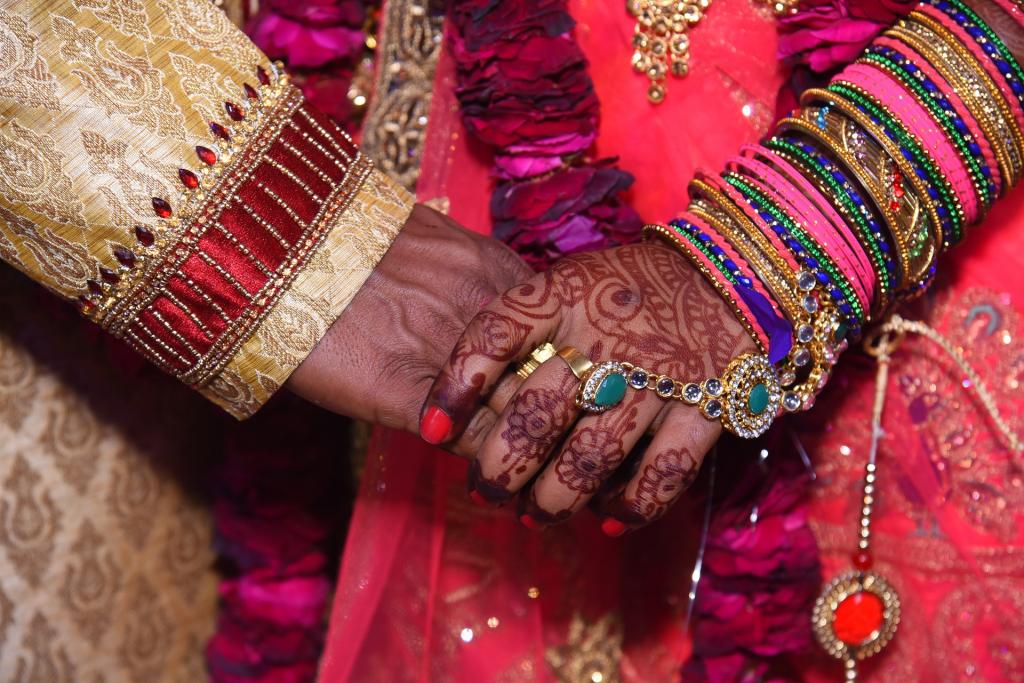 The Convention on the Elimination of all Forms of Discrimination against Women (CEDAW) recognises the right to protection from child marriage in Article 16 of the United Nations General Assembly (UNGA). It stated the “betrothal and marriage of a child shall have no legal effect and all necessary action, including legislation, shall be taken to specify a minimum age for marriage.”

Explicit linkages — relating child marriage to other rights, including the right to freely express views, protection from all forms of abuse and detrimental traditional practices — were established, even though there is no direct mention of marriage in CEDAW.

One in three girls in low- and middle-income countries — barring China — were married before the age of 18, according to the UN Children’s Fund (UNICEF) in 2012.

Some of the main contributory factors for adolescent marriage and teenage pregnancies were cited by J Roest, A Singh and PE Revollo, R Singh and U Vennam and R Udgiri. These were deep-rooted patriarchal socio-cultural practices, control over women’s sexuality, poor socio-economic conditions, low literacy rates and lack of awareness of family planning methods.

India is the home to largest number of child brides, according to the UN Population Fund in 2012. Nearly 27 per cent women aged 20-24 years were married before attaining 18 years of age. The prevalence of female child marriage, however, declined by 20 per cent in the past 10 years, according to the International Institute for Population Sciences and ICF International Inc in 2017.

A focus on the symbolic aspects of gender was relevant in the context of the timing of marriage in south Asia in general and India in particular. Marriage was classically ubiquitous and remained so, wrote NP Das and D Dey, in their 1998 study Female Age at Marriage in India: Trends and Determinant.

While age at marriage rose slowly, largely through declines in child marriages, the median age at marriage remained below 20 years. The average age of marriage in India increased at a snail’s pace, with the major hurdles being socio-cultural constraints.

These included the strong cultural stresses on the importance of female chastity that induced parents to arrange a daughter’s marriage at an early age to avoid potential situations that can challenge these so-called merits. 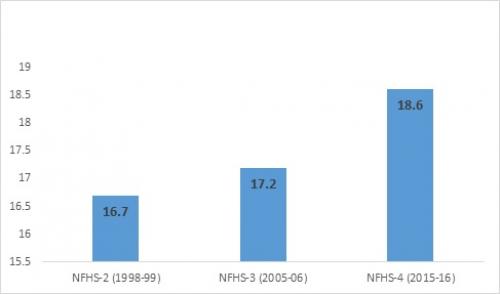 There was sufficient evidence to believe there were significant variations in the prevalence of child marriage even within Indian states.

In a state with an overall high rate of child marriage, it is thus probable that certain districts would have a lower prevalence of child marriage. This was due to specific cultural, social or administrative characteristics that made these districts stand out from the rest of the state. 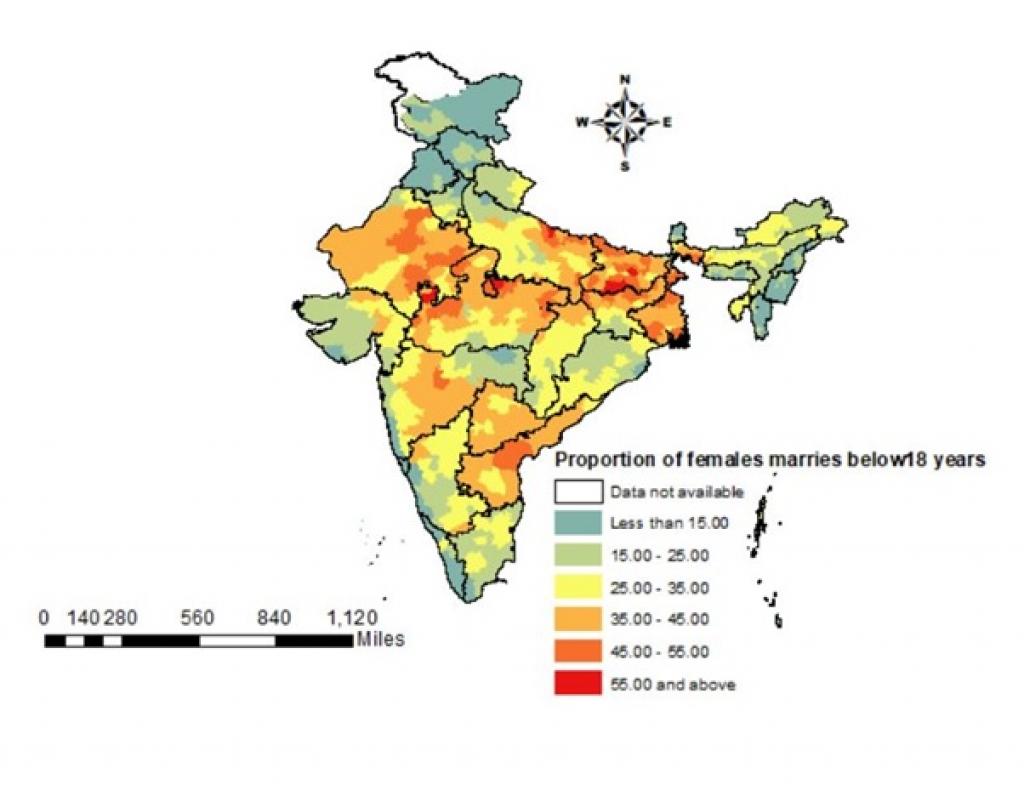 The proportion of females getting married before 18 years was greater towards the northern region, including Bihar, Chhattisgarh, Madhya Pradesh, parts of Maharashtra and Uttar Pradesh.

States like Kerala, parts of Gujarat, Punjab and Tamil Nadu — including the Union territory of Jammu and Kashmir — had a considerably lower proportion of females marrying below 18 years.

To elaborate, the coastal areas and the eastern tribal districts of Maharashtra reflected a better condition in this regard, compared to the central part.

At least a quarter of women in Andhra Pradesh, Bihar, Jharkhand (except southern bordering districts), Madhya Pradesh, Rajasthan, Telangana, Uttar Pradesh (except a few districts that bordered the west and a few city pockets) and West Bengal, however, married when they were below 18 years.

Education and marriage: Why is the relationship important?

Education plays a momentous role in women’s lives as it decides the timing of life events. In south Asian societies — where women have to customarily choose between education and other life opportunities — getting married mostly means dropping out of school, according to the UNGA’s 2014 Resolution on Early, Child and Forced Marriage.

Estimates showed each additional year of delay in the age of marriage increased schooling by 0.22 years, wrote E Field and A Ambrus in 2008.

This was consistent with the findings of previous studies, according to Marriage and Fertility Dynamics: The Influence of Marriage Age on the Timing of First Birth and Birth-Spacing, a 2016 study by K MacQuarrie.

Median age at first marriage by level of education (2015-16)

This relationship was crucial because there were also inter-generational forfeitures of low-level of education. In the context of public health, education was best understood as an extensive element of maternal capital: A form of corporal niche to which each child was exposed to, during the start of life, according to two studies conducted by J Wells in 2010 and 2014.

If less education was, thus, a ‘consequence’ of maternal low-age at marriage, this cycle of detriment may be bolstered through lower schooling and under-age marriage of daughters.

They were prone to similar health consequences as their mothers, transferring the cycle of detriment onto their next generation as well, according to a 2007 study by L Bates, J Maselko and S Schuler.

It is, thus, important to understand that merely increasing age at marriage by legal provision may not suffice. There is a need to escort this change with concomitant policies pertaining to education of girls.

Lack of education and under-age marriage — when combined — were major contributors to lack of control for women at the individual level throughout their life-cycles, said SM Lee-Rife, in his 2010 study Women’s empowerment and reproductive experiences over the lifecourse.

Husbands and mothers-in-law may exert greater control over younger women who, being less educated, may not be able to stand for themselves, wrote R Jensen and R Thornton in Early female marriage in the developing world, a 2003 study.

Domestic violence — spousal violence in particular — was yet another facet of low empowerment pertaining to young women’s inability to resist and repudiate.

Women married under-age were more likely to experience physical or sexual violence than their counterparts who were married after attaining 18 years, according to R Kidman, in Child marriage and intimate partner violence: a comparative study of 34 countries, a 2016 study.

The findings from the above table indicate low autonomy was reflected in the high prevalence of spousal violence across states and a low ownership of land and bank accounts. The negative implications on health were reflected from the substantially high prevalence of anaemia among women who were married and were now 18 years or younger.

Northern and eastern states were the worst performing states on all indicators, while southern states fared better. The relation of low age at marriage and the indicators chosen above are explained below:

Prior research suggested early marriage and adolescent pregnancy led to the depletion of body mass and iron deficiency of women. It was also established that children born to women married early were more likely to have childhood anaemia, compared to those born to women married during later ages, according to P Paul et al in a 2019 study.

The table above showed states like Bihar, Jharkhand, Uttar Pradesh and West Bengal had considerably greater proportions of women under 18 suffering from anaemia. It was noteworthy that these were the states with lowest age at marriage and high rates of child malnutrition.

The relationship between child marriage and land ownership of women was quite hazy due to the dearth of studies conducted on this aspect in India. Lack of detailed gender disaggregate data was one of the prime reasons behind this.

It may be that girls who married early lived in settings that were more traditional, leading to more women working the land and possibly owning the land, than if they were engaged in other occupations. A more in-depth analysis, however, is needed to cover this aspect.

Low bank account ownership can prove to be a major hurdle towards campaign for financial inclusion campaign. Low age at marriage, thus, can be a major setback.

The high prevalence of intimate partner violence among child brides can be accorded to a number of reasons, cited by K Santhya et al in 2010, UNICEF in 2014 and R Jensen and R Thornton in 2003. These included the lack of education, poverty, spousal age gaps, power imbalances, social isolation and lack of female autonomy.

The above table again reflected the states with lowest ownership of bank accounts and land were the ones that had the lowest age at marriage and high rates of spousal violence, with Bihar, Manipur and Uttar Pradesh among the worst performing states.

Age at marriage: The way forward

The aim of the article was to show the trends in women’s marriage age in India, its determinants and consequences and its pertinence as a public health issue.

Marriage is not just a cultural practice suggestive of women’s status in society, but is also linked to multiple biological, ecological, and geographical factors, each of which is crucial for public health. Marriage is the ‘gateway’ to multiple health consequences associated with the timing of child-birth.

Disentangling the broad predictors of marriage age is complex. They were interrelated and tightly interwoven with socio-cultural norms, broader economic and geographical contexts, and trans-generational developmental processes, according to J McCleary-Sills et al in 2015 and E Scolaro et al in 2015.

Laws alone cannot end child marriage and change marriage pattern either. In places where child marriage persisted, the ill-effects of such marriages were usually well accepted by policymakers, community leaders and parents.

But prohibitions themselves were not always sufficient because child marriage was typically the result of a lack of choices, and hence, families and communities also wanted substitutions. So, gender equality — in terms of availability, accessibility and utilisation of basic provisions and rights — must be ensured in curbing low age at marriage.

An intensely rooted traditional practice can, thus, only be addressed through awareness generation and with stronger policy frameworks. For improving nuptial bottlenecks in India, we need economic empowerment, social and intellectual empowerment and stronger implementation of laws in the community.