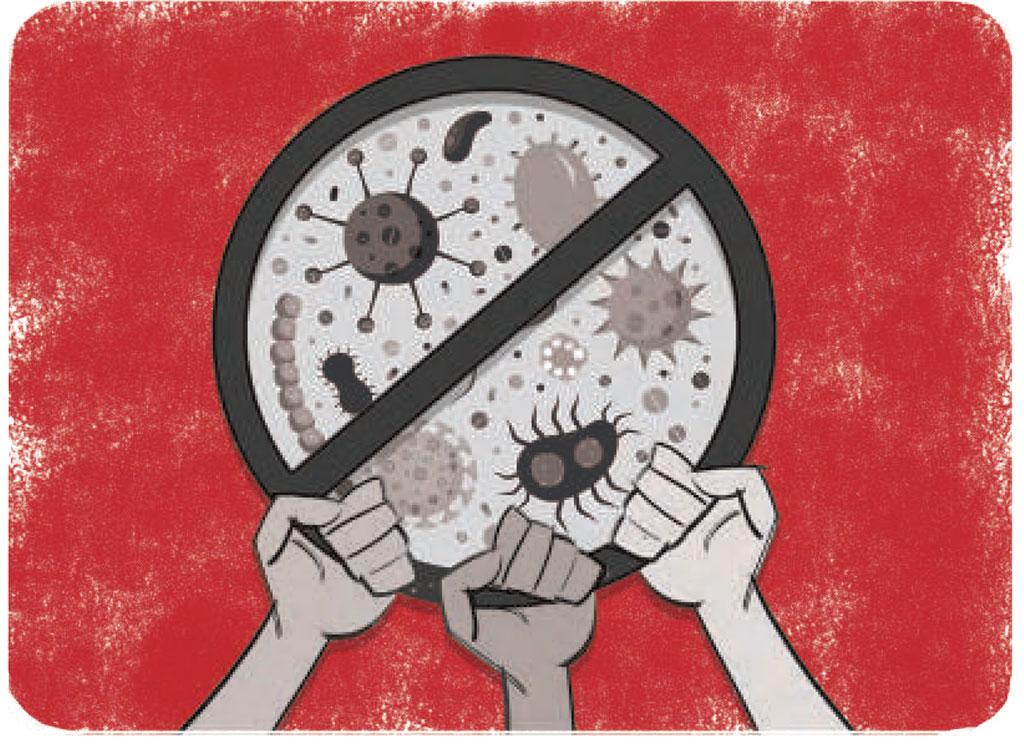 It is a resistance that is difficult to control. Think of it like the revenge of the microbe — the bug that we thought we had conquered and squashed. The miracle of modern medicine, antibiotics — which has saved millions of lives over generations — could be compromised.

Why? Because the bugs against which these medicines work have developed resistance. This is a global pandemic and will jeopardise our health and well-being. It will be impossible to treat simple infections, forget life-threatening diseases.

This is a problem of huge proportion — it’s the climate change aproportionate crisis of the health world. In 2016, antibiotic resistance became a concern big enough for the United Nations (UN) to discuss it at the General Assembly. Before this, the UN in its long history had discussed health topics only three times — when HIV, non-communicable diseases and Ebola became a global crisis.

The Secretary General set up the Interagency Co- ordination Group (IACG) on Antimicrobial Resistance to formulate a blueprint to fight this problem. Over the next two years, discussions between policymakers, industry, individuals and civil society took place.

The group finalised its report in April 2019 which said that antimicrobial resistance could threaten a century of progress in health and achievement of the Sus- tainable Development Goals. The report pointed out that efforts to address antimicrobial resistance in the environment lag far behind in attention, advocacy, political commitment, engagement and the evidence base.

The report proposed a “One Health” response to the problem as the drivers of antimicrobial resistance lie in humans, animals, plants, food and the environment.

There are two problems here. For one, multisectoral efforts often fail. We have seen this in the case of cleaning of the Ganga river where the industry continues to pollute even as governments put in more and more money to treat the water.

We have seen it in the case of air pollution when governments failed to provide enough public transport while the industry pushed private vehicles on the road. Even in the case of antibiotic resistance, implementation would not be easy as misuse is driven by profit.

Farmers use antibiotics as growth promoters and prophylactically so that the size of their animals is bigger. The pharmaceutical industry is pushing antibiotics to increase sales. Doctors are under pressure from the industry to prescribe more and more of these “magic bullets”.

But there is also the fact that lack of antibiotics can seriously compromise public health. So, people need these medicines — access is as important as the question of misuse. The problem also is that as first-line antibiotics do not bring in profits, Big Pharma has stopped producing them and the market is flooded with second and third-line drugs which are more expensive.

The question is how to ensure that medical practitioners and people know what is “right” for their health. We should ensure that doctors do not over prescribe; people do not misuse. A recent study by Gurugram-based Public Health Foundation of India showed that antibiotics were being prescribed to treat urinary infections which are often self-limiting and respiratory tract infections which are generally viral in nature.

However, when it comes to third and fourth-line of antibiotics, India beats others. The percentage of prescriptions with cephalosporins and quinolones (38.2 per cent and 16.3 per cent) in India is significantly higher than in the US (14 per cent and 12.7 per cent). The third-line of antibiotics, which should be prescribed only at the hospital level, are prescribed at the primary care level.

We came face to face with the problem of misuse of antibiotics long back in 2010 when we tested honey for the presence of antibiotics. All honey samples that the Centre for Science and Environment (CSE) tested had residues of at least two antibiotics. Antibiotics were being used by beekeepers to keep their beehives free of disease and as growth promoters.

We then tested for antibiotics in chicken in 2014. We did this because a top cardiologist came to us to tell us that he believed something was seriously wrong— this doctor wanted to keep his costs low as heart patients came from poorer and more rural backgrounds. But mortality was high because antibiotics did not control the infections. He believed that exposure to antimicrobials could be through other pathways; not orally administered as medicine, but through food and environment. He wanted us to check.

The CSE laboratory bought 70 samples of chicken from different markets spread across the National Capital Region. It analysed each animal for six antibiotics: oxytetracycline, chlortetracycline and doxycycline (class tetracyclines); enrofloxacin and ciprofloxacin (class fluoroquinolones); and, neomycin, an aminoglycoside. All these antibiotics are critical for humans. These are the same medicines we are prescribed when we are ill — they are life-saving drugs.

Of the 70 samples, 40 per cent — literally every second chicken we tested — had antibiotic residues and 17 per cent of the samples had more than one antibiotic present in the muscle, kidney or liver. The antibiotic was delivered through feed — it was given as growth promoter, more than even for therapeutic reasons.

Then it was widely sprayed as a prophylactic — to prevent diseases from spreading. All in all, it would make bugs resistant and as it got into the environment and into our food, we would not be able to be treated for diseases. This is a big part of the problem.

I was amazed to find that even the issue of growth promoters — when the antibiotic is used to enhance the weight of the animal — and not its use as disease prevention, was stiffly fought by these powerful interests. Finally, it was agreed that governments would adopt measures to stop the use of growth promoters in food production.

But what is also clear is that we need much tougher action. But equally, we need to understand that it is not about the delivery of antimicrobials only. It is also about the way in which we do agriculture or livestock production — we need to make the link with the method and not just the medicine.

In the case of antibiotic use in honey, we discovered that the business of beekeeping had been industrialised. In India, the introduction of the European bee (Apis mellifera) was done as it was a more prolific producer of honey. This economically viable bee took over the business, virtually replacing the humble but more adapted Indian bee (Apis cerana) from our food.

At the same time, the business of honey was also transformed. It moved away from small producers, collecting honey from the wild and cultivating honey in natural conditions. It got consolidated into a highly organised business, controlled by a handful of companies.

Now it is these companies, who handle all aspects of the trade — from the supply of the queen bee to the paraphernalia of bee-housing, feeding and disease control to the producers, spread across different states. It is an outsourced business, run by franchisees whose job is to find places, like the apple farms of Himachal Pradesh, where there is nectar for bees to suck. The dependence on one introduced species and the emphasis on overproduction means bees are overworked in this competitive business.

As disease grows, the answer is to feed bees antibiotics liberally, mixed in sugar and other syrups. The bee makes honey and with it comes the lethal dose of unwanted antibiotics in our food. It was the same in the case of poultry. This highly organised industry used antibiotics because it was concerned that its chicken bred in overcrowded and often highly unsanitary conditions would get diseased.

So, chicken farmers pump antibiotics in drinking water to prevent any outbreaks. Their need to use antibiotics is driven by the method they have chosen to produce our food. This is not all. The poultry industry uses antibiotics also for profit.

When chicken is given antibiotic-laced feed, it puts on weight. So, farmers buy antibiotics in bulk and mix it in feed. Or they simply buy the pre-mix feed manufactured by the big poultry, which includes antibiotics and its labels claim that it will promote growth in broiler chicken. So, it is part of the business of our food. This is what we must connect to. We must change.

The good news is that while regulation is necessary, what really triggers change is consumer pressure. Consumer test reports (like ours on honey or chicken) are the key to behaviour change in the livestock industry. Big food giants in the US have now committed to reduce antibiotic in chicken (already done) and now in meat. But not yet for the rest of the world — our lives don’t matter it would seem.

This is where our governments must exert pressure. But we need effective antimicrobials more than anyone else. Our recent assessment shows that farmers along the banks of the Yamuna in Delhi, Hisar in Haryana and Fazilka in Punjab use streptocycline (a 90:10 combination of streptomycin and tetracycline) indiscriminately in crops.

It is not approved for use in crops. In humans, streptomycin is used for previously-treated tuberculosis (TB) patients, who make up over 10 per cent of the total estimated TB incidence in India. It is also used in multi drug-resistant TB patients and in certain cases of TB meningitis (brain TB). Resistance to streptomycin is quite high and its large-scale non-human use could add to the problem. The World Health Organization classifies it as a critically important antibiotic for humans.

So, this is why we must act. In this coming decade, the revenge of the bug must be understood and combatted. But for this, the “One Health” approach means that we need to fix what is broken — if the water is dirty, it will add to the health burden of people and this will require treatment; if the air is toxic, we will need to take antibiotics and this adds to the problem of resistance. So, let us fix what we can — clean the environment and re-design our food system and fix another of the world’s most wicked and existential problems.

As we put together information on antibiotic resistance, we have come to a conclusion that the only way to control the problem is to keep the environment clean.