At the heart of Dharavi model: Basic public health, resolve in community to beat COVID-19

Dharavi has proven wrong predictions for a COVID-19 doomsday. Its model to combat the novel coronavirus disease pandemic has been hailed. So, how did one of the world’s largest slums curtail the spread of the pandemic despite its 8’x8’ shacks housing five-seven people each?

Down To Earth spent six days at Ground Zero recently to understand what worked in Dharavi and what didn’t and whether it was too early to declare victory; We also looked at the existential issues people there continue to face. Here is the first report in a three-part series.

There was a strange contrast between the sprawling Mumbai metropolis and Dharavi, the iconic ‘slum’ at the heart of it. India’s otherwise-busy financial capital was under lockdown, not Dharavi. Be it the market on 90-Feet Road or the dimly lit bylanes, the place hummed with activity.

Nearly 0.8 million people — that’s more than the population of Bhutan — call the 2.2 square kilometre area home. This has led to a population density of 225,000 people / sqkm: 600 times the national average.

Eighty per cent of these people depend on community toilets. How do you practice physical distancing amid that? How do you contain a pandemic?

The market on 90 Feet Road at Dharavi hums with usual activities in mid-July, even as the rest of Mumbai is still under lockdown. Photo: Adithyan PC

We reached Dharavi 105 days after the first COVID-19 case was reported there. The impression the heavy traffic in front of the landmark Kamrajar Memorial English High School gave us was one of victory.

Daily new cases on an average had come down to nine in Dharavi in July from 43 in May; Greater Mumbai’s caseload, meanwhile, kept adding 1,000 new cases everyday. A total 2,597 people in Dharavi tested positive through August 6; 250 died, according to the Brihanmumbai Municipal Corporation (BMC). 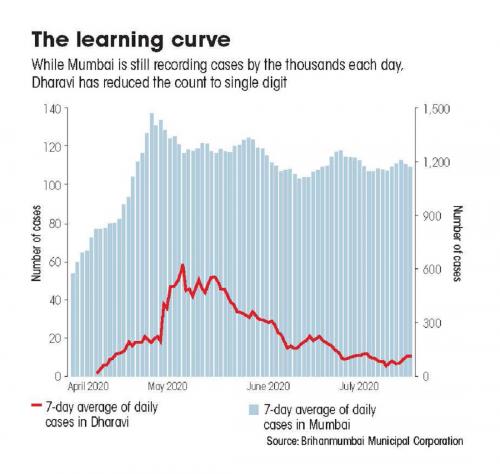 The situation was way more challenging a few months ago though for Kiran Dighavkar, the BMC assistant commissioner under whose jurisdiction Dharavi is. There was hardly any preparation: “I was idle, in fact watching movies, until March-end,” he says. The first COVID-19 patient in Dharavi died April 1, 2020, the very day his ‘positive’ report landed. The news spread like wildfire, panic gripped Dharavi’s people and an apocalypse was predicted.

The BMC traced 74 people who came in contact with the first patient and quarantined them. But the next day, another case surfaced — a person who shared a community toilet with thousands. He had also been to a mosque.

“If we believed that we would be able to do perfect contact tracing in settings like Dharavi, we would be cheating the people. Contact-tracing was prescribed by the Indian Council of Medical Research and the state government, but we soon realised it would be impossible,” Dighavkar said.

Testing was to be on a gargantuan scale — virtually impossible. Instead, team started to screen people on a massive scale by visiting houses and setting up fever camps in localities. Temperatures were taken by infrared thermometers and blood oxygen levels were read by pulse oximeters.

Screening holds no parallel to testing. But by screening about 0.4 million people helped in taking out suspect cases — some 15,000 — from the system. Among those suspected to be carrying the SARS-CoV-2 virus, those with symptoms were quarantined and subsequently tested. The ones who tested positive, were sent to hospital isolation wards; those negative remained at the quarantine centres for 14 days.

While ‘test-test-test’ was the mantra of the experts, on ground in Dharavi it was ‘screen-test-screen-test’. This, local doctors and other epidemiologists said, is at the heart of the Dharavi model. It showed how smart testing could be a way out of shortages of resources and kits.

Still, only about 40 per cent were screened. So how was the screening planned? Thirteen areas, with high case loads, were identified for this.

Healthcare workers initially hesitated to hit the ground. But some private doctors who practice in Dharavi came forward. Ten teams of 24 healthcare workers were formed for the first phase for screening. In the first eight days, 47,000 people were screened, of whom 600 showed symptoms. All of them were tested and 119 were found positive. This was in the second week of April.

The size and scale of screening was gradually ramped up. Simultaneously, quarantine centres (with a total 3,840 beds) were set up in schools, colleges, parks, hostels and community halls to house those segregated post-screening.

Visiting doctors instilled confidence in people. “Hence, in the third week of April, when doctors opened clinics, the people started coming for self-identification of symptoms. This eased our stress of identification. We worked in tandem with the government and would report all suspected cases for tests,” Anil Paschnekar, who has been practicing in Dharavi for 25 years and is also national vice-president of the Indian Medical Association, said.

Three private hospitals were acquired for treatment and the Sion public hospital was also designated for COVID.

The clinics not only helped in segregation but also indicated to the BMC as where screening drives should be carried out, state epidemiologist Pradeep Awate told DTE.

BMC Deputy Health Officer Daksha Shah claimed that 50-60 per cent positive cases were identified through screening and testing. “Once a positive case was detected, we contact-traced 15 people at least and tested them,” she said.

Integrated Medical Practitioners (IMP), who study Ayurveda as well as some allopathy, played a significant role. Kailash Goud, an IMP practicing in Dharavi, narrated how a WhatsApp group of doctors would help: “At times, we would encounter a probable COVID patient who did not have a classic COVID symptom, like abdominal pain. We would share it on the group. Experienced allopathic doctors would then advised us on our course of action.”

Later, even ICMR included it such a symptom in its list, Goud added.

“They ensured nobody went in or came out. Local boys formed WhatsApp groups to amplify precautionary messages. They shared information of where dry ration or food was needed. When agencies failed to reach the last person, the young boys kept the spirit alive,” Bhaskar Shetty, a Dharavi-based social activist, told DTE.

Ramesh Nangre, a senior police inspector at Dharavi police station, explained how the force took help of religious leaders: “These leaders ensured that audio clips talking about precautions would be played on an hourly basis from mosques and temples’ sound systems.”

When the police started to comb the area to enforce lockdown, people were initially sceptical. A few police teams, including Nangre’s, were also attacked.

But quickly, people became receptive to their instructions of staying at home and avoiding gatherings which are very common in Dharavi. This behavioural change in such a short span shocked even Nangre. “Where the police could not reach, we formed volunteer groups who did the job on behalf of us,” he said.

The administration used drones in Dharavi for three months, starting April, to check whether gatherings were forming. Photo: Adithyan PC

The police also co-ordinated distribution of food and spread awareness, Besides the force that Nangre had at his disposal, the Central Reserve Police Force and the state Reserve Police Force were summoned. Drones were used to check whether people were gathering anywhere.

A force whose only work was to maintain law and order, for the first time, worked in curbing an infectious disease. “There was no template when we began. We learnt on the field, literally. Now I can write a whole set of guidelines on police’s role in disease management,” he quips. But police paid a price too. Forty of them detected positive and one — inspector Deepak Gaikwad — died.

The infection rate, meanwhile, peaked in May with 1,216 cases and declined in June with 480 cases. The downward trend continued in July, with 288 cases.

Not that the model had no fault-lines. Our second story will focus on the first-hand experience of people and experts for a 360-degree view of the Dharavi model.

This is the first of a three-part series. Read the second part here