Coronavirus update: Faulty rapid kits to be returned to China

Centre has not paid for the kits, says Harsh Vardhan

Union Minister for Health and Family Welfare, Harsh Vardhan, has said that the rapid antibody kits that India had got from China and were found to be faulty, would be returned.

Addressing health ministers and officials of various states on April 24, 2020, the Union minister said that the government had not paid for those kits.

“If it is realised that the technology is useful, we would get fresh kits,” he said, adding even the world was not clear about these kits.

“Yesterday, I was attending a meeting of health ministers of various countries and that of WHO officials. Even the WHO is noncommittal about their utility. They say these tests are only for surveillance and epidemiological purposes (and not diagnostic purposes). The body would issue guidelines to that effect soon,” he said.

Don’t create hype about these kits in the field. Proceed according to Indian Council of Medical Research (ICMR) guidelines as and when you get them, Harsh Vardhan advised the states. The ICMR had asked states to put these tests on hold, on April 21, as it received complaints about huge variation in the results.

The ICMR had also said a field validation of these kits would be done by its institutes. The research body has still not made its results public though it had said the validation would be completed in two days, on April 21.

Therefore, it is not immediately known as to how many kits, out of total seven lakh procured, are faulty and how many would be returned. The ministry officials refused to give any details when Down To Earth reached out to them. However, the minister told his state counterparts that the ICMR was still collating the results of field validation. It might take another one or two days.

In a letter to chief secretaries of all the states, Additional Director General of ICMR, GS Toteja said, “I would again reiterate that antibody rapid tests are largely to be used as a tool for surveillance with respect to formation of antibody in persons exposed to the virus. Globally also, the utility of this test is evolving and it is currently being used for detecting the formation of antibodies in individuals. These test results are also dependent on field conditions.”

“To further assist the States, ICMR will continue to collect data from various states to assess the scope and extent of utility of these rapid antibody tests in fields conditions of our country and will keep advising the states on a regular basis. (The) states are advised to follow the prescribed protocol for these tests and use it for the purposes for which these are meant,” he had said.

India’s death toll from the novel coronavirus disease (COVID-19) reached 718 on April 24, 2020 morning, according to the Union Ministry of Health and Family Welfare. 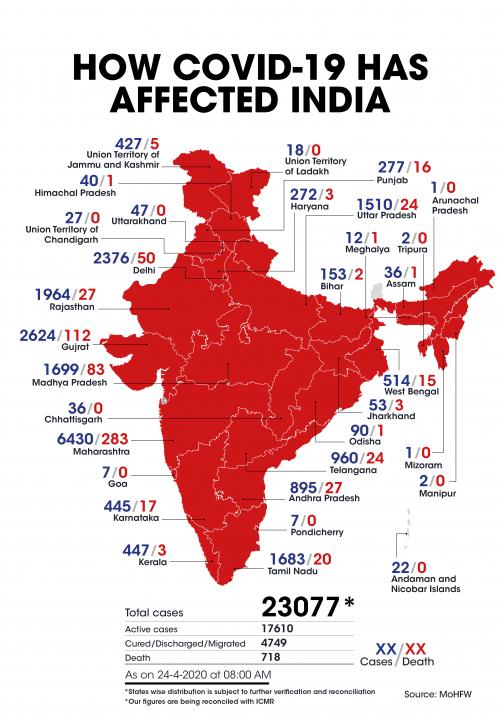