No new case in China yesterday

A 68-year-old man infected with the novel coronavirus (SARS-COV-2) died in Punjab March 19, 2020 — the fourth such death in India — the Union Ministry of Health and Family Welfare said.

In the morning, the ministry confirmed 166 people tested positive. Of them, 151 are active cases while 15 have recovered. The death toll remained at three. There were 25 foreigners among those affected. In the afternoon, Press Trust of India (PTI) reported the tally to be 169. 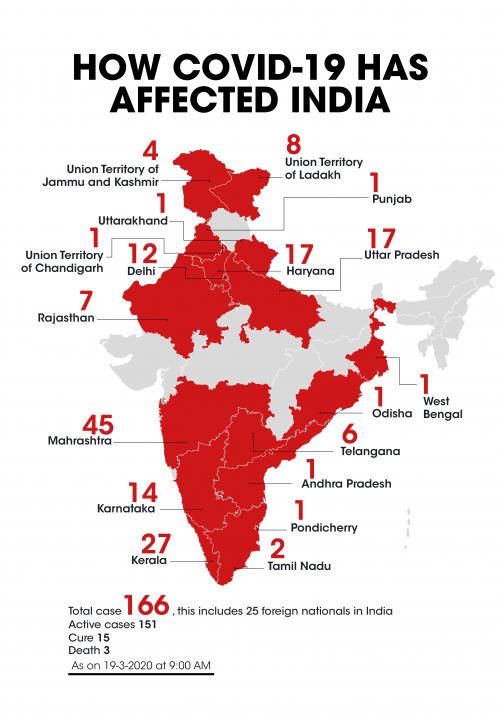 Maharashtra continued to lead the charts with 45 cases, followed by Kerala (27 cases). Haryana and uttar Pradesh had 17 cases each.

International news agency Reuters reported that roads were blocked in the Karsmir region of Jammu and Kashmir to prevent the spread of COVID-19.

In Delhi, all schhols, colleges and other educational institutes will be shut down.

The outbreak has affected the airline industry bad. Already, GoAir has fired several contractual employees, according to media reports. IndiGo announced pay cuts for its employees.

In an effort to reduce crowding, the Punjab government decided to ban the public transportation system from March 21. The government has also limited public gathering to 20 from the existing 50.

The pay cut comes after several airlines around the world asked employees to take unpaid leave or similar pay cuts.

Air India may cut salaries by 5 per cent

Air India may cut salaries of its employees by 5 per cent. The loss-making airline, which is in the process of a second attempt of privatisation after failing to get a single buyer nearly two years ago, took measures like reduced flying allowances to cabin crew amid the virus outbreak.

There were 82 new coronavirus cases in Indonesia, marking its biggest daily rise, the Indonesian government said. The total number of confirmed cases rose to 309, a health ministry official said.

Malaysia may resort to deploying its army if the public continues to flout a two-week lockdown the government imposed to contain the virus pandemic.

South Korea reported a jump in new coronavirus cases on March 19, reversing days of slowing infections after a new outbreak emerged at a nursing home in the city of Daegu.

US legislation that will expand Medicaid and unemployment benefits, mandate paid sick leave and childcare leave for certain employees and order free coronavirus testing, was passed in an effort to to limit the damage from the pandemic. Infections in the US passed 9,400.

US government preparing for pandemic to last up to 18 months

Nearly two months since the first US coronavirus case, the federal government is now preparing for a pandemic that could last up to 18 months or longer and “include multiple waves of illness,” a report by news channel CNN said.

For the first time in more than two months, not a single new case was reported in China, which recorded its first case on December 31, 2019.

Pakistan recorded its first death in the novel coronavirus outbreak (COVID-19), while the global toll reached 8,967 from a total 219,243 positive cases.

A 35-year-old man jumped to his death at New Delhi's Safdarjung hospital March 18, 2020. He was admitted there on suspecion of having contracted the novel coronavirus (SARS-COV-2). He returned from Sydney, Australia.