One person tested positive of the novel coronavirus (SARS-COV-2) in Pune, taking the total number of cases in Maharashtra to 42, on March 18, 2020 morning. The person travelled to France and Netherlands recently.

Kerala continued to follow Maharashtra in the count of cases with 27 cases while Uttar Pradesh and Haryana had one case each. India’s total tally reached 147, with 130 active cases. West Bengal entered the list on March 17 with one case. 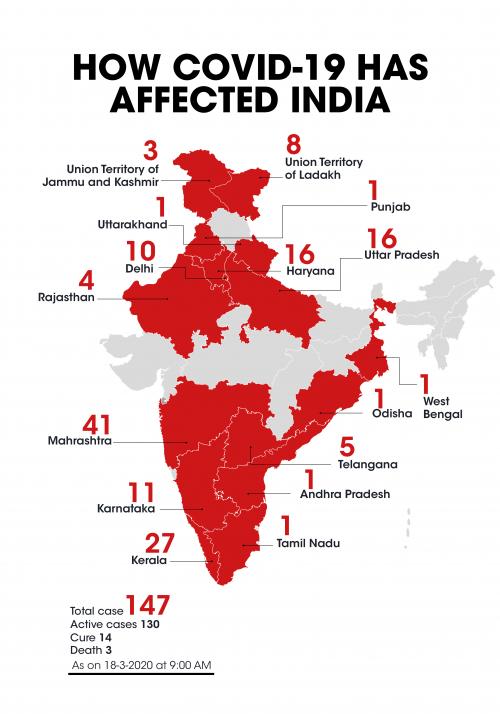 The death toll remained at three — one each in Karnataka, Delhi, Maharashtra. Fourteen patients have been discharged, according to the Union Ministry for Health and Family Welfare.

Worldover, 198.518 people tested positive by March 18, amogn whom 82,763 have recovered. The death toll reached 7,988, with nearly half of them being in China — from where the COVID-19 outbreak started — but Italy remainig a close second.United States added 103 new cases while South Korea added 93.

An Indian Army soldier tested positive for novel coronavirus on March 18, 2020. He is a resident of Chuchot village in Leh. His father had tested positive for coronavirus on March 6 following his return from a pilgrimage in Iran on February 27. He was quarantined at the Sonam Nurboo Memorial (SNM) hospital in Leh. Two days later, he was isolated at the Ladakh Heart Foundation.

Hours after the Indian Army soldier tested positive for novel coronavirus (COVID-19), the Centre asked all paramilitary forces to go into ‘battle mode’. An advisory was issued with details about soldiers’ roles and responsibility in containing the spread of the virus (SARS-CoV-2) that has killed nearly 7,000 people worldwide and infected over two lakh others.

According to a study published in Nature Medicine, the novel coronavirus causing COVID-19 pandemic is not artificially made, but the product of natural evolution. According to researcher, the findings are crucial to dispel rumours around the origins of SARS-CoV-2.

Coronavirus can survive on some surfaces for days: Study

SARS-CoV-2 can survive on some surfaces for days or in the air for several hours, according to a new study published in New England Journal of Medicine (NEJM). The study suggested that the virus was detectable for up to four hours on copper, two-three days on plastic and stainless steel, and up to 24 hours on cardboard.

Zimbabwean President Emmerson Mnangagwa issued a ban on March 17, 2020 on all public gatherings with more than 100 people in an effort to control the spread of coronavirus.

China’s National Health Commission said there were 13 new cases of infection in the country, adding that 11 people died from the virus on March 18, 2020.

The number of COVID 19 cases in the Philippines touched 202 on March 18, 2020 after the Department of Health confirmed 15 new cases.

Pakistan Prime Minister Imran Khan called upon the citizens to “not panic” amid a spike in COVID-19 cases in the country. He warned that the spread of COVID-19 was inevitable and that Pakistan cannot afford the economic cost of shutting down its cities.

Tunisia will impose a curfew from 6 pm to 6 am starting March 18, 2020, its president said. The move is aimed at tightening measures to counter the spread of coronavirus. It has declared 24 COVID-19 cases so far, and has closed mosques, cafes and markets and suspended international flights.