“What can you do when a sea of people comes and overwhelms you,” say officials 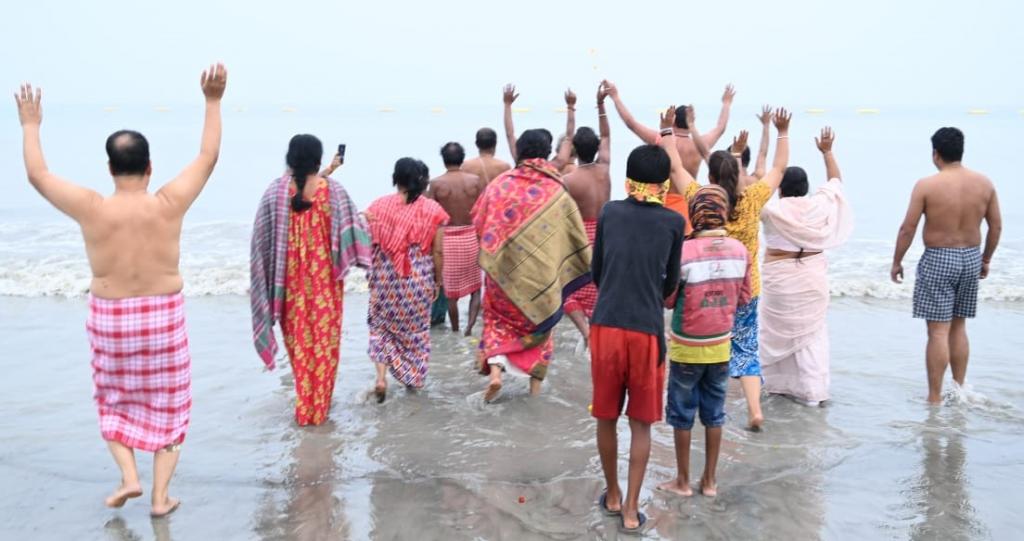 Devotees head to the sea at Sagar Island in West Bengal for a dip January 14, 2022. Photo: Jayanta Basu

Persistent drizzle has ensured that “far less” people than usual took the makar sankranti bath at the Ganga Sagar Mela on Sagar Island in West Bengal on the morning of January 14, 2022.

But novel coronavirus disease (COVID-19) norms laid down by the Calcutta High Court to conduct the event under surging pandemic conditions were largely flouted as more than 300,000 pilgrims reached the island.

The official website of the Ganga Sagar Mela claims that it is “the World’s second-largest human congregation at the confluence of the holy river Ganga and the Bay of Bengal after Kumbh” and more than three million devotees usually frequent the event every year under normal circumstances.

The local authorities said many more pilgrims will descend on the island later January 14 and 15 to participate in the Shahi Snan.

They will add to the challenge to conduct the Mela without allowing it to become a super- spreader of the contagion, as feared by several public health experts.

“We are trying to stop as many as possible from reaching Sagar Island,” one official said.

The two-member court-appointed committee expressed dissatisfaction about the safety violations after several on-site visits January 12 and 13, according to district administration sources.

They pointed out violations like failure to stop the entry of pilgrims without valid RT-PCR reports and mass congregations at various areas, particularly at the entry points to the island as well as at Kapil Muni’s ashram; the actual point of pilgrimage.

“Unless you adhere to the court-set norms, we will be hard-pressed to act tough,” the committee apparently told the senior officials present.

“Only those who have a Covid-negative RTPCR report from less than 72 hours ago will be permitted to enter Sagar Island,” the Calcutta High Court division bench of Chief Justice Prakash Shrivastava and KD Bhutia said January 11.

The bench also asked the administration to ensure that all participating in the Mela were doubly vaccinated. It barred any assemblage greater than 50 people in the Mela, particularly at Kapil Muni’s ashram; main pilgrimage point.

The court has also given power to the committee to recommend a ban on the entry of devotees to Sagar Island at South 24 Parganas district if COVID-19 rules are violated.

“We are conducting the Mela in compliance with the directives issued by the High Court,” P Ulganathan, district magistrate of South 24 Parganas, said.

“We are trying our best; but what can you do when a sea of pilgrims comes, overwhelms and goes past you? For a Mela of this scale, once you allow it to happen, then you will have little control over the crowds, a great proportion of whom have little awareness,” a police official stationed at Ganga Sagar January 14, said on the condition of anonymity.

Many sadhus, on Sagar Island as well as at various transit points on the way to the pilgrimage, were seen to refuse COVID-19 testing and even isolation, when found afflicted with the virus. Many of them have been found not to wear masks.

State minister Arup Biswas, who is at Ganga Sagar to have the Mela conducted successfully, said January 13 evening that 300,000 pilgrims had entered Sagar Island and claimed that all of them were screened. “We have found 13 positive people so far,” the minister said.

“Six of 7 doctors sent for duty to Ganga Sagar had to come back after being affected with the virus. More than 30 cops have been found to be affected,” a public health expert said.

The expert wondered as to how come such a low number of people (13 as claimed by minister Biswas) were found affected when the state positivity rate was so high.

At least six independent petitions were filed in the Calcutta High Court in the run-up to the Mela.

Physicians and public health experts urged the court through the petitions to stop such mass congregations, warning that the event could become a super-spreader.

“The way the Mela is being allowed to be held, the situation is bound to deteriorate further,” Hiralal Konar, a physician and one of the conveners of the Joint Platform of Doctors in West Bengal, a non-profit, said.

West Bengal recorded a positivity rate of 32.13 per cent January 13, the highest in the country. Twenty of its 23 districts currently have rates from 11 to 59 per cent, against the World Health Organization-mandated safe limit of five per cent.

South 24 Parganas currently has a 23 per cent positivity rate and more than 50 micro-containment areas.

Kunal Sarkar, another senior physician, warned that the “threat of (super-spreading from) Ganga Sagar and elections remains” even as there is no plateau in sight for COVID-19 cases in the state.

“We fear that once a Mela such as Ganga Sagar is allowed, other smaller mass congregations in the name of Mela or otherwise will be allowed, further worsening the situation,” a physician attached to the state government, said.

The expert reminded that Joydeb Mela in Kenduli, Birbhum district, has also been allowed by the administration. Birbhum currently has a 47 per cent positivity rate.

“As of now, the plan of holding the Kolkata Book Fair in late January stands, unless the state government lets us direct otherwise,” said Tridib Banerjee, one of the key organisers of the Fair that attracts about 2.4 million on average over 12 days.

“It is unfortunate that the court has not kept any public health expert in its monitoring comment. At the end of the day, it is a public health problem,” Punyabrata Gun, another convener of the forum of doctors, said.

Lawyers agreed. “Even if we consider the best of efforts from all concerned, it is still impossible to execute the directives with millions participating in the Mela. It is like fait accompli,” environmentalist and lawyer Subhas Datta, said.

He added: “People in the know of the Mela and having public health expertise, should have been part of the monitoring committee.”

“Given the COVID-19 situation prevalent at the time of passing of the order January 7, 2022, the doctrine of precautionary principle could have been applied. The views of the Indian Council of Medical Research, virologists and other medical professionals could have been used in this context,” senior lawyer Kallol Bose, said.

Bose however reminded that the court had made the chief secretary personally liable to ensure the compliance of its stated order.