APIs are crucial for drugs and countries have put their eggs in a single basket; India has been discussing the issue for sometime 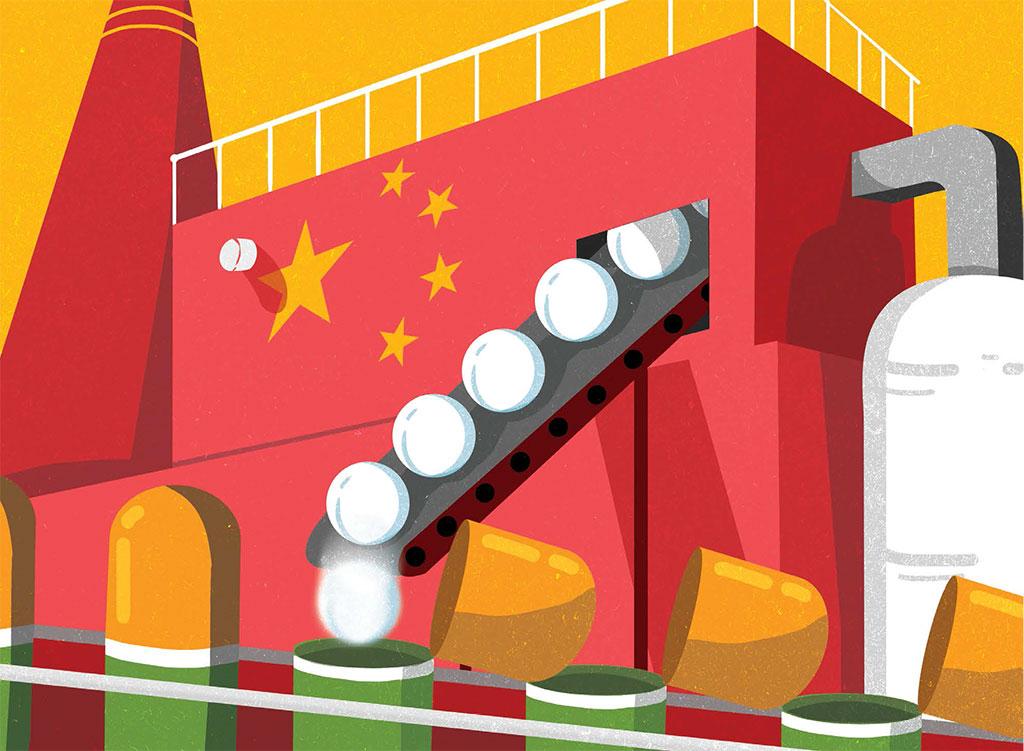 This is the second part in a three-part series.

Chinese dominance in the pharmaceutical sector has been questioned across the world. In an April-6 note, the United States Congressional Research Service observed that COVID-19 “is drawing attention to the ways in which the US economy depends on manufacturing and supply chains based in China”. White House trade adviser Peter Navarro is working towards relocation of medical supply chains to the US. Japan and Australia have similar plans.

In September 2019, the European Fine Chemical Group, a non-profit association of European fine chemical manufacturers, published a briefing paper asking countries to reduce their dependence on China and India.

Maggie Saykali, director of Specialty Chemicals, a grouping of over 50 sectors of Europe’s fine and consumer chemicals industry, says that massive offshoring of API production and Registered Starting Materials leaves the European Union dependent on China and India for close to 80 per cent of its medicinal products. COVID-19 has underlined these dark spots of global supply chain, said Saykali.

Only 28 per cent of the manufacturing facilities making active pharmaceutical ingredients (API) for the US markets were based in that country. This was told to a US House of Representative subcommittee by Janet Woodcock, director, Center for Evaluation and Research, US Food and Drug Administration. In her testimony, Woodcock quoted two papers to highlight why China and India are in advantageous position when it comes to producing APIs.

Referring to a 2009 paper by the World Bank Exploratory Study on Active Pharmaceutical Ingredient Manufacturing for Essential Medicines, she said if a typical Western API company has an average wage index of 100, the index is as low as 8 for a Chinese company and 10 for an Indian company. Referring to a 2011 FDA report Pathway to Global Product Safety and Quality, Woodcock said China and India enjoy advantage of low labour costs which reduces the API manufacturing costs.

API manufacturing in India can reduce costs for US and European companies by 30 to 40 per cent. Manufacturing in China gets benefit of lower electricity, coal and water costs. Chinese firms are also embedded in a network of raw materials and intermediary suppliers and, therefore, have lower shipping and transaction costs. They face fewer environmental regulations regarding buying, handling and disposing toxic chemicals, leading to lower direct costs for these firms, Woodcock said.

India, too, has been worried about its increasing dependence on China. In 2014, Rajya Sabha member Motilal Vora raised the issue of inappropriateness of importing API from a single country in the House. The same year, National Security Advisor Ajit Doval called the rising dependence on Chinese drug makers a “national threat”.

In 2013, a high-level committee on promoting domestic manufacture of APIs had already been set up under VM Katoch, the then director general of Indian Council of Medical Research (ICMR) and secretary of the department of health research under the Union Ministry of Health and Family Welfare.

In July 2018, a parliamentary standing committee report presented to the Rajya Sabha pointed out there was an urgent need to revive the country’s capability to produce APIs. The committee noted that China had increased the prices 1,200 per cent in the last two years. This slashed the profit margin for India’s industry.

To increase self-sufficiency, the Katoch committee’s report, submitted to the Ministry of Chemicals and Fertilizers in February 2015, recommended the creation of three to six mega parks. These parks should provide free or shared water, electricity, effluent treatment plants and testing facilities to the pharmaceutical industry.

The government would have to invest Rs 750-1,000 crore for each of these. The committee recommended that the private manufacturers should be provided benefits like 15-year tax-free status, access to loans and foreign investment. It also pushed for reviving the public sector Indian Drugs and Pharmaceuticals Limited with an infusion of Rs 500 crore.

While this committee’s report was awaiting implementation, the government formed another task force in 2018, chaired by Mansukh Mandaviya, the Union Minister of State for Chemicals and Fertilisers. This, too, reiterated the recommendations of Katoch committee.

India has already started work to revive the industry. Department of pharmaceuticals has approved development of mega parks in Andhra Pradesh, Telangana and Himachal Pradesh and is providing assistance up to Rs 100 crore for creation of Common Facility Centre (CFC) in these under the scheme Assistance to Bulk Drug Industry for CFC. India’s record in creating such parks has, however, not been good (see ‘India has poor track record’).

Affordability in the key

Manufacturers say it is not easy to cut the umblical cord with China for supply of basic drugs. The government needs to regulate drug prices to ensure that people have access to cheaper medicines. This, in turn, makes the pharmaceutical sector look for ways to cut prices, thus increasing their dependence on the lowcost Chinese model. 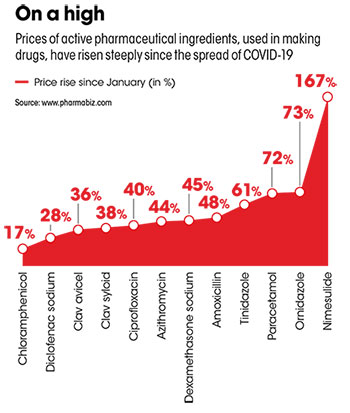 Beside availability, the affordability of medicines is a major challenge for India. Media reports already demonstrate that API prices in India have shot up after the pandemic. China provides 75 per cent of APIS used in the formulations of drugs in the National List of Essential Medicines (NLEM) and there could be an increase in prices of medicines in the list.

In a recent interview to the Financial Express daily , Mandaviya said increased self-sufficiency in manufacturing of critical bulk drugs would ensure the availability of essential drugs listed under NLEM at affordable prices.

The government has to mandatorily ensure that prices are low as these drugs are part of the Essential Commodities Act, 1955, which regulates the prices of essential supplies like grains, foodstuffs and medicines. The list of drugs under price control has steadily expanded from 74 in 1995 to nearly 860 in 2019.

According to brokerage firm Centrum Broking, going by the wholesale price index of 2019 and 2020, the increase in prices of drugs under NLEM would not be steep. However, prices of non-NLEM drugs would continue to increase at 10 per cent.

“With China resuming supplies of raw materials, potential disruption in manufacturing is now no longer a concern. There has been inflation in select raw material supplies but the same should only have a minor impact on gross margins during the quarter,” brokerage firm Nirmal Bang said.

Private manufacturers have not been keen to provide medicines that are under price cap. They say it does not help as the poor are still not able to afford them. “The problem is that India spends too little on healthcare,” wrote Amir Ullah Khan, professor of economic policy at the Indian School of Business and the Nalsar University of Law, in daily Mint.

India has to keep the drug costs low. Its public spending on health is very low. It is unlikely that the country would be able to procure much if it buys at the private sector prices. Public sector pharmaceutical companies, therefore, become relevant as they can provide drugs at the cost price even after including the cost of pollution control.