The workers reportedly began their journey on March 23, 2020, with some accompanied by their wives, children

Migrants in Gujarat work in the construction sector as labourers, tea stall vendors and as domestic help in households Photo: Rajeev Khanna

Thousands of migrant workers in Gujarat are undertaking long journeys to their native villages on foot. The workers, mostly tribals, travelled upwards of 250 kilometres, in the absence of public transport.

Migrant workers are forced to take this step after the Union government initiated a janata (people’s) curfew and subsequently, a 21-day nation-wide lockdown on March 25 to curb the outbreak of the novel coronavirus disease (COVID-19).

The workers reportedly began their journey on March 23, 2020, with some accompanied by their wives and children.

Workers from the unorganised sector — including the construction sector — and those in the informal economy across India expect to suffer long-term unemployment and a loss of their livelihoods from the lockdown.

The migrants in Gujarat work in the construction sector as labourers, helpers at grocery stores, tea stall vendors and as domestic help in households.

“They are from the tribal areas of Banswara, Dungarpur, Udaipur, Sirohi of Rajasthan, Jhabua in Madhya Pradesh and also the tribal districts of Dahod, Panchmahals, Banaskantha, Sabarkantha in Gujarat,” said Hemant Shah, an economist and teacher.

Contractors at several construction sites did not pay labourers, leaving them with no option but to undertake inhumane journeys, said Vipul Pandya of trade union Bandhkam Mazdoor Sangathan.

“In many places, police have been sympathetic to them, knowing they have nowhere to go but home. Many labourers were stopped at Katlal by police personnel and after screening, private vehicles were arranged for their transport,” Pandya said.

Chaitanya Mandlik, who is the superintendent of police in Sabarkantha, set one such example, by arranging food, water and private transport to ferry labourers.

This cruel form of migration could have been avoided, said both Shah and Pandya. 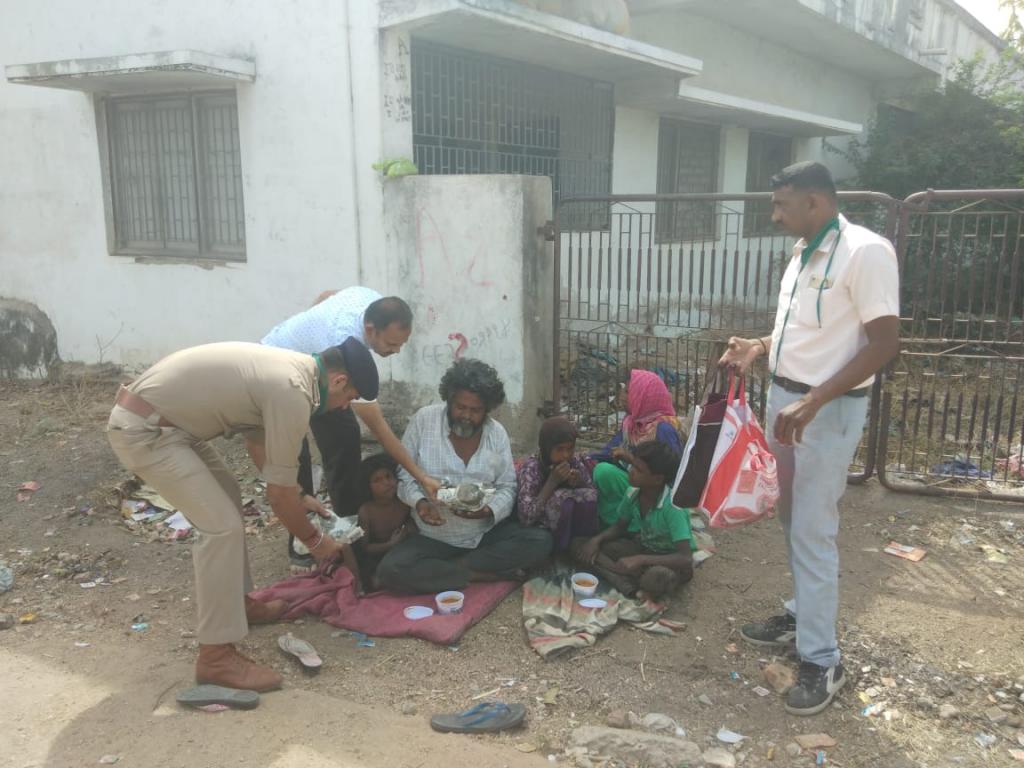 In many instances, police have been sympathetic to the migrant workers Photo: Rajeev Khanna

The state governments of Rajasthan and Gujarat could have communicated with each other and buses carrying 40 to 50 per cent of their capacity — keeping social distancing in mind — could have transported the workers, Shah said.

“The government can go to the extent of airlifting Indian citizens trapped in other countries. But this was comparatively easier to do. There are labourers at sites where there are no shops or any other facility. What option do these people have?” asked Pandya.

There are approximately two million construction labourers in Gujarat, according to Shah.

The magnitude of the problem was very high even if half of them left their places of work, he said, adding that a mechanism to allow charitable institutions to step in was needed.

There were also reports from Surat about a large number of labourers from Saurashtra leaving from home.

“Since these people are relatively better off, a large number of them managed to leave by private vehicles,” said a source.

“The money is already there with various welfare boards and the deposits made under the UWIN cards that were introduced in Gujarat for the workers in informal sector,” said Pandya.

“We have demanded from the government that at least 50 per cent of their minimum wages should be deposited in the accounts of all the labourers who are registered under various boards. Similarly, money that was promised to farmers under the Kisan Yojana should be given to the farm labour,” he added.

There was also a need to make timely payment to labourers and to legally bind employers to not deduct salaries or retrench the labour force, according to him.

The government needed to step in for cases where the employers faced financial crunches.

A minimum income support programme for informal workers, was one recommendation made by them.

“All the informal workers holding any form of worker ID cards, or documentary proof that they are informal sector workers should be given an immediate cash transfer of Rs 10,000 for one month,” said another recommendation.

The recommendation said any such move should include construction workers with Welfare Board card, street vendors with licences, daily wage workers, migrant workers and domestic workers.

Waste picker workers carrying any worker organisation card such as Trade Union, Worker Collective should be given Rs 10,000 and a directive sent to all employers to not deduct salaries of employees who cannot work remotely, the recommendation added.

A committee for the creation and management of a relief fund for informal workers should also be created, according to the activists. The committee should draw plans for reaching out to the most marginal worker groups, they said.