Odisha has around 70 industries, including 12 steel plants, many of which produce industrial oxygen 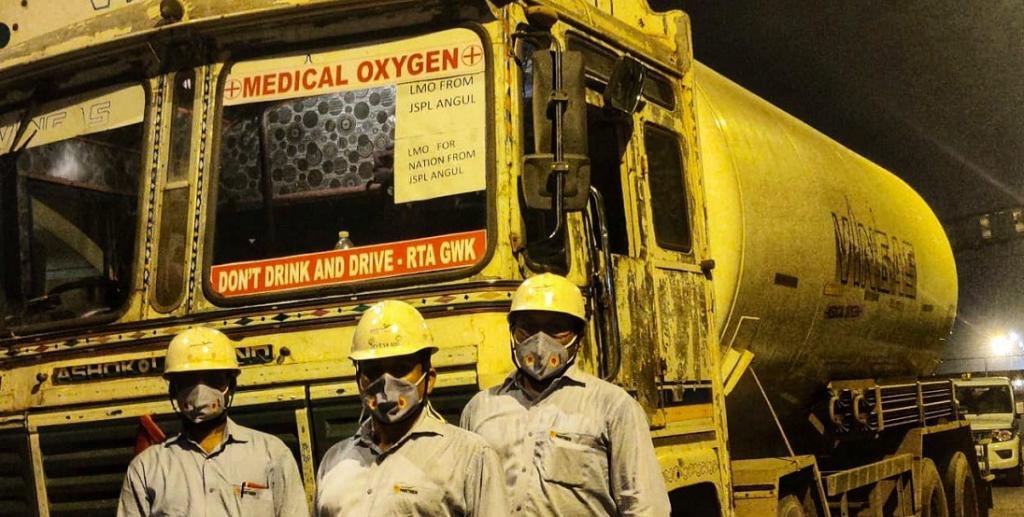 A tanker with oxygen going from Jindal Steel and Power Ltd in Angul to Andhra Pradesh. Photo: Ashis Senapati

Major industries and steel plants in Odisha have started supplying medical oxygen to other states from April 23, 2021 on the directions of the state government.

Odisha Chief Minister Naveen Patnaik April 22 offered to help Delhi and Maharashtra meet their requirement of medical oxygen with supplies from his state.

Both states are the worst-affected in the ongoing second wave of the novel coronavirus disease (COVID-19) pandemic, with several hospitals and medical centres facing a shortage of oxygen after the surge in COVID-19 cases.

The state police have made special arrangements to ensure uninterrupted and fast movement of medical oxygen from Odisha to states facing a deficit.

Odisha has around 70 industries, including 12 steel plants, many of which produce industrial oxygen.

The Steel Authority of India Ltd-run Rourkela Steel Plant (RSP), Jindal Steel and Power Ltd (JSPL) at Angul and the Tata steel plant at Kalinganagar in Jajpur district are prominent among them.

Steel is produced in the basic oxygen process, that uses pure oxygen to convert a charge of liquid blast-furnace iron and scrap into steel.

Odisha will give 70 tonnes of liquid medical oxygen (LMO) per day to Delhi — 40 tonnes oxygen from RSP and 30 tonnes from Tata Steel Plant at Kalinganagar, Mohapatra added.

An RSP official said the plant had supplied 7,740 tonnes of LMO to Odisha as well as other states since April 2020, to meet the requirement of this vital lifesaving item.

The plant had given some 572 tonnes of LMO to Odisha and other states in April 2021 itself, in spite of tanker availability being the bottleneck, the official claimed.

Three air separation units (ASU) of RSP’s oxygen plant produce oxygen in gaseous form for use in the process of making steel. The units also supply oxygen for use in the Ispat General Hospital of RSP.

Besides, Linde India Ltd has been operating two more ASUs on a build, own, operate basis to meet RSP’s oxygen demand, the official added.

The JSPL plant at Angul sent around 22 tonnes of medical oxygen to Visakhapatnam in Andhra Pradesh April 23, 2021. The tankers left Angul for Visakhapatnam with tight security.

JSPL has more than 500 tonnes of liquid oxygen stock readily available at our Angul plant. We are waiting for the users to send their tankers. We can fill up on a first-come-first-serve basis or as per the priority decided by the Ministry of steel. We will soon supply oxygen to Batra Hospital, Medanta and Artemis Hospital in Delhi/NCR along with Telangana and Madhya Pradesh.

The Government of India has set up a committee that will review the production, consumption and stocks of oxygen available at all the steel plants in the country.

Medical oxygen is critical to the treatment of COVID19 patients. Responding to the national urgency, we are supplying 200-300 tonnes of liquid medical oxygen daily to various state governments and hospitals. We are in this fight together and will surely win it.

“We hope that the transportation issue is sorted out expeditiously and the required quantity of LMO reaches the desired destinations. We are working on the alternative sourcing as well,” an official of the Tata steel plant at Kalinganagar, said.

The Chief Minister’s Office in Odisha said Maharashtra Chief Minister Uddhav Thackeray April 22 thanked his Odisha counterpart Naveen Patnaik for the steps taken by him to ensure supply of oxygen to his state.

Delhi Chief Minister Arvind Kejriwal had a telephonic conversation with Naveen Patnaik where he thanked Patnaik for helping the national capital with oxygen supply.

Odisha Health Director Bijay Panigrahi told this reporter that the state’s daily requirement of LMO was 25 tonnes. “We have enough for the moment,” he said.