Mamata Banerjee govt not testing enough, according to Opposition, experts

West Bengal’s tally of those who have tested positive to the novel coronavirus (SARS-CoV-2) and who those have died in the ensuing disease (COVID-19) may not be presenting the real picture, alleged opponents of Chief Minister Mamata Banerjee. Some public health experts indicated the same.

Banerjee has refuted the allegations and said her administration adheres to Indian Council of Medical Research guidelines.

The eastern state’s tally of 231 cases and seven deaths — according to the Union government as of 8 am, April 16, 2020 — were lower than other big states like Maharashtra, Tamil Nadu and Rajasthan or even Capital Delhi despite high population density. 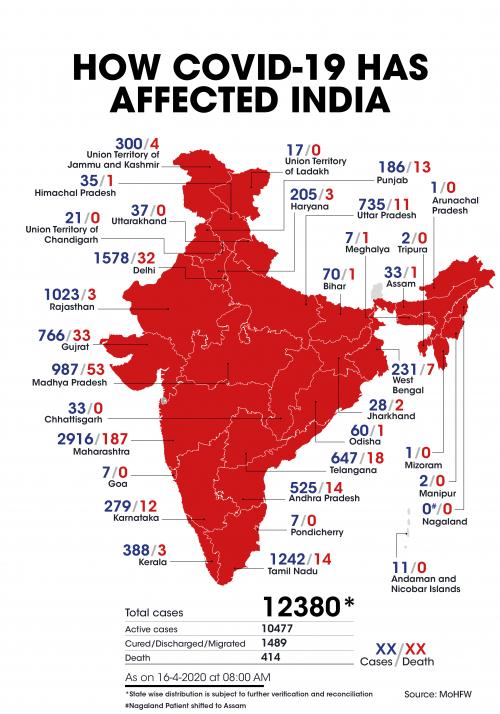 The Opposition alleged the numbers are underreported. At least 16 people have died of COVID-19, Bharatiya Janata Party state chief Dilip Ghosh told Down To Earth April 12, 2020.

“The number of those affected is much more than what the government states. Unless the state accepts ground realties, it will be difficult to curb the disease,” he said.

Ghosh alleged the Kolkata Municipal Corporation disposed of the bodies of some of those who died in the disease at Dhapa, a large landfill on the city’s eastern fringes. His party colleague and Union minister Babul Supriyo repeated the allegation: “If they did not die of COVID-19, why were the bodies not handed over to their family?” asked Ghosh.

Communist Party of India (Marxist) leader Fuad Halim, himself a doctor, moved the Calcutta High Court, claiming that the state government did not follow the World Health Organization guidance to test as much as possible.

“Out of the four major points those I raised, the first and most important demand is more and more testing as per WHO and ICMR guidelines,” Halim told DTE.

The CM, however, blamed the Centre for not supplying enough testing kits. “We ordered 50,000 rapid testing kits,” she said. “Earlier, tests were carried out only in two laboratories. This number has now increased by four to five. We also need to train those who will be carrying out the tests,” she added.

An April 13 state government order emphasised early detection of cases. It also asked for swab samples of all symptomatic contacts of COVID-19 patients to be taken, along with a house-to-house surveillance of those with symptoms of any influenza-like illness — including fever, a sore throat, cough and runny nose or symptoms of Severe Acute Respiratory Illness (shortness of breath, respiratory difficulty, etc).

“It is a welcome step, but may have come a few weeks too late. We will end up chasing a shadow if not extremely proactive,” said a public health expert.

West Bengal tested about 25 people in a million until April 12 — among the state's with the lowest rates. Of them, 5.3 per cent tested positive.

Odisha, in contrast, conducted 88 tests per million, despite having a much lower rate of around 1.4 per cent. States with higher testing rates and lower positivity rates were said to be better placed in countering the pandemic.

The National Institute of Cholera and Enteric Diseases (NICED) distributed 7,500 kits across the state, according to its director Shanta Dutta on April 14. Approximately 3,081 of the kits, or 40 per cent, were utilised, the state government had said.

The central agency initially carried out around 90 tests a day, but later it was sent fewer than 20 samples a day, Dutta said.

“If you look at the deaths, you will find some of the patients suffered from comorbidities like chronic obstructive pulmonary disease; cardiac problems or diabetics,” Santanu Sen, a Trinamool Congress Rajya Sabha member, told DTE.

“These may at best be called deaths triggered by COVID-19, but cannot be listed as deaths resulting from the disease,” according to Sen, who is also a doctor.

Such a death audit committee, however, existed only in West Bengal, said Opposition Congress, claiming this was only to suppress facts.

“Why do you need an audit committee to ascertain COVID-19 deaths, when doctors treating the patient are good enough to do that?” asked Congress leader Pradip Bhattacharya.

“An Italian study with 355 COVID-19 patients found only 0.8 per cent of dead people actually had no comorbidities indicating that the comorbidities are great benchmarks in assessing the true mortality catered by the virus,” said Arup Haldar, a physician and public health analyst.

Several hospitals were forced to close either partially or fully, after frontline healthcare workers, including doctors had to be quarantined, when they came in close contact of those infected by the virus.

Public health experts point out the trend to be tell-tale proof of less and late testing.

“Apart from low testing and death count there is also a major question with the unknown nature of the source of most affected persons found in West Bengal,” said a public health expert on the condition of anonymity.

“If the sources are not known, the state government cannot plan to counter the disease, be it creating high-risk zones or micro spots,” the expert said.

A fourth of the cases in West Bengal were unknown source cases, one of the highest proportions across the country, according to data released by the union government on April 14.

A public health expert with earlier experience in handling a pandemic observed the key to success in countering one was to be honest about data, including building up the contact list of affected people, so that one does not find any patient beyond that list.