COVID-19 spurs return of the natives to Uttarakhand ghost villages

The Uttarakhand government arranged transport for 564 residents to return to their native, ghost villages across the state, after the Union government called for a nation-wide lockdown on March 25, 2020 to curb the novel coronavirus disease (COVID-19) pandemic.

The Himalayan state has been grappling with a migration problem for a long time — people leaving their native villages in search of education and employment.

This results sparsely-populated ghost villages in the state’s rural, hilly areas. These villages are dotted with locked houses and have poor amenities.

The villages are mostly populated with those who have no option but to stay back, including women and elderly people.

The nation-wide lockdown has resulted in a reverse migration trend, where those who work in the informal and unorganised sectors in urban areas, expect to suffer long-term unemployment and a loss of their livelihoods.

The number of those returning to their villages in Uttarakhand may rise in the coming days, as the state government attempts to help residents reach their native villages. 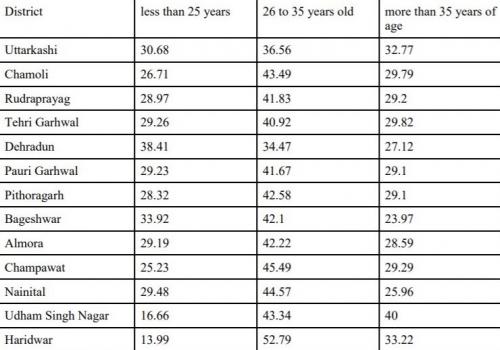 “In my village, many left for jobs leaving behind their old parents or locked houses for their extended family or neighbour to take care,” said Ganesh Nautiyal, a resident of Devalsari. “The village is bustling with activity once again as many have returned,” he added.

Nautiyal himself earlier migrated from Landour, around 45 km away from the village, where he runs a small eatery. He returned to his village after the lockdown.

Vast swathes of land in the ghost villages earlier lay in waste as these areas were unsuitable for cultivation.

There is lack of water and conflict with animals like monkeys and wild pigs makes it difficult to grow crops.

The young earlier rarely came to these villages, sometimes only for religious rituals.

A total of 6,897 migrants, however, returned to their villages in Pauri Garhwal district, according to District Magistrate Dheeraj Singh Garbyal.

Kot, Ekeshwar, Nainidanda and Rinikhal were the blocks that saw the most number of people coming back, according to him.

A similar trend was seen in Rudraprayag district’s Jakholi block.

Nearly 30 per cent of the district’s 70,000 residents from 108 gram sabhas had left villages to work in Delhi, Mumbai, Bengaluru and capital Dehradun, according to Pradeep Thapliyal, the Jakholi block pramukh.

Interim report on status of migration in gram panchayats (in percentage) 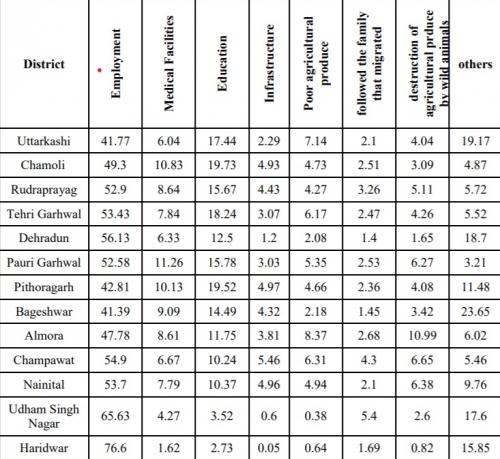 500-600 people employed with the private sector returned to their families in the past few days, he said.

The maximum migration to urban areas would earlier happen from Almora and Pauri Garhwal districts.

The state government had set up a migration commission of Palayan Aayog to deal with the issue of ghost villages in 2017.

Half the population had migrated to cities for employment, while 15.21 per cent had done so for education, according to a Rural Development and Migration Commission report released in September 2019.

As many as 700 villages were listed as ghost villages.

Lopsided government policies leading to more development in the plains than in hilly districts were in part responsible for this large-scale migration.

It is now difficult to predict for how long the people who returned to their villages will stay there for.

People might go back to their cities once the lockdown is over.

Many might have to stay back, however, as industries are not likely to bounce back immediately, according to Manoj Rawat, an MLA who represents Kedarnath in the legislative assembly.

Most of those who migrated are daily or contractual workers, who may not have jobs to go back to.

The state government will have to deal with the situation of unemployment once the threat of the pandemic is over, Rawat said.