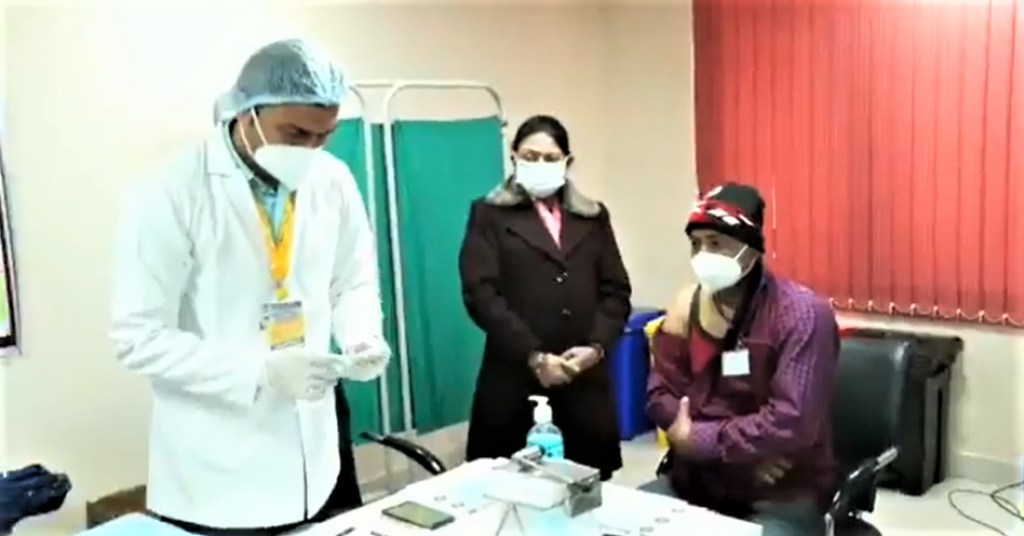 The vaccination drive against the deadly novel coronavirus disease (COVID-19) began in Bihar January 16, 2021 in the presence of senior government officials.

Officials said around 30,000 health workers would be vaccinated on the first day of the vaccination drive that began in 300 centres spread across 38 districts of the state.

Some doctors expressed doubts over the efficacy of Covaxin, manufactured by Bharat Biotech International Ltd. “We are apprehensive about its efficacy. I am not going to get the vaccine,” a doctor from Patna-based Indira Gandhi Institute of Medical Sciences (IGIMS) told this reporter on the condition of anonymity.

A hundred people will be vaccinated at each session site. Of the total 300 session sites, 259 are government-run while 41 are private.

Sanitation worker Ram Babu, 35, was the first person in Bihar who got the vaccine shot at IGIMS in the presence of Chief Minister Nitish Kumar, health minister Mangal Pandey and a host of health department officials. The second person to get the vaccine was Amit Kumar, an ambulance driver from the same health institute.

“I am not at all worried. I had continued my duty even at the peak of the COVID-19 outbreak. What then is the point in getting nervous after having the life-saving shot?” Ram Babu asked after getting the vaccine at the IGIMS.

There are five members in his family. His wife had earlier tested positive for COVID-19 but got cured soon. Amit Kumar, who is the second person to get the vaccine said harbouring fear was more dangerous than contracting the virus.

Around 15,000 trained health workers have been engaged in the massive vaccination drive that will continue for four days in a week — Monday, Tuesday, Thursday and Saturday, state immunisation officer NK Sinha said.

Some 4,64,160 health workers have got themselves registered for the first phase. Of them, 3,79,962 are government workers while the remaining 84,198 are private health workers.

“We have set the target to vaccinate 10 million health workers and 20 million frontline workers,” the health minister said.

Bihar’s recovery rate or the percentage of people who had recovered out of those who had been infected, had touched 98 per cent now, he added.

The vaccination began in a systematic manner at the centres. Three rooms were set up at each session site — waiting room, vaccination room and observation room.

Each beneficiary was put under observation for 30 minutes after s / he had got the shot to find out if they had any side effects before allowing them to go home. Mediapersons were not allowed to enter.

The state government has set up 678 cold chain points across the state. Health officials said Bihar has received the total dose of 5,69,000 vaccines. They include — 54,900 vials (each vial containing 10 doses) of Covishield vaccines manufactured by the Serum Institute of India and 1,000 vials (each vial containing 20 doses) of Covaxin manufactured by the Bharat Biotech.

The state government has set up 10 regional centres for storing vaccines in Patna, Aurangabad, Bhagalpur, Darbhanga, East Champaran, Muzaffarpur, Nalanda, Purnia, Saharsa and Saran for the first phase. The vaccines will be supplied to neigbouring districts from these places.

“We have arranged for colour-coded bags for disposing bio-medical wastes. The responsibility for collection / disposal has been given to three companies,” Bihar health secretary Pratyay Amrit told the media.

The drive suffered the first major technical glitch when the Co-WIN portal crashed late on the evening of January 15, unable to bear the load as a result of which, messages about the place and timing of the vaccination could not be sent to the beneficiaries.

Eventually, the health authorities directed the civil surgeons and the district magistrates to communicate the message to beneficiaries.