Even India’s best-governed states are not a 100% in child health: Report

It finds that states like Kerala and Tamil Nadu, which did well in overall child well-being, slipped down in child health indicators

Even children in India’s best-governed states are not well, according to the India Child Well-Being Report released on August 27, 2019.

The report has been prepared by World Vision India, one of the largest child-focused humanitarian organisations and IFMR LEAD, a research organisation based in India. They used the most recent data available to take a holistic look at child well-being.

The researchers used a total of 24 indicators to create the score instead of just considering income poverty. The 24 indicators are divided into three categories: Healthy individual development, positive relationships and protective contexts.

The report is important considering that 40 per cent of the country’s population is made of children between the ages of 1 and 18.

The index captures the performance of each state and union territory on a composite child well-being score, with Kerala, Tamil Nadu and Himachal Pradesh leading the charts among the states and Meghalaya, Jharkhand and Madhya Pradesh featuring at the bottom.

The data shows that even states that are performing best in overall child well-being, are not doing so well in indicators of health. 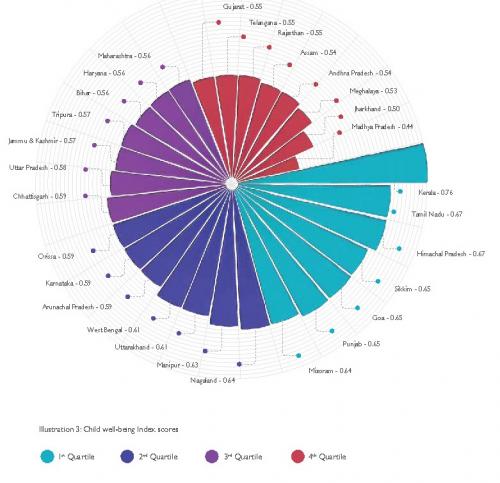 On the other hand, West Bengal that is eleventh in overall performance, does better in health indicators and ranks seventh. Similarly, Andhra Pradesh which performs poorly in the overall index and is at the 26th position, does well in health and goes up to the twelfth position.

The report shows that though a lot has been done in states that are the best, even they are not 100 per cent up to the mark, says Arjan De Wagt, chief of child development and nutrition at UNICEF India.

Cherian Thomas, chief executive of World Vision India, points out that in terms of health, it has to be ensured that the child is taken care of in the first 1,000 days of life. Stunting is a big issue in India and this is linked to poor sanitation and lack of safe water, he adds.

While World Vision would use the data to identify areas where the organisation will work in the future, Thomas hopes that this data would help others too.

Amitabh Kant, chief executive of Niti Ayog, released the report and said it was crucial to invest in the future and well- being of children who would take India forward. He talked about a ‘peoples’ movement’ to achieve this as governments’ work need the support of community and civil society to build the momentum.

Kant said the Index could be mined both by the government and civil society organisations to achieve the goal of child well-being. “Our government is fully committed towards securing the rights and well-being of children and we are making investments in this regard,” he said. 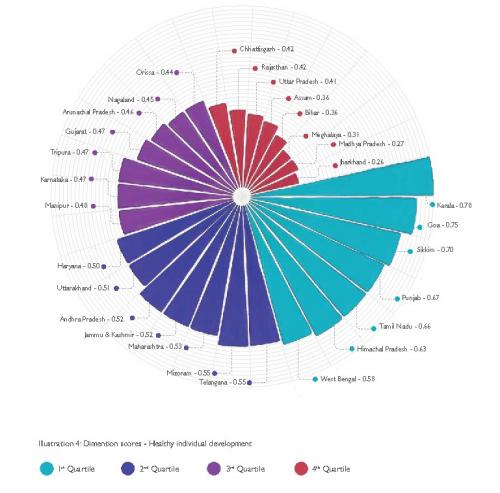