Fewer kids under 3 breastfed within an hour of birth, finds NFHS-5

The highest percentage of children under three who were breastfed within one hour of birth was registered in Meghalaya, followed by Lakshwadeep, Kerala and Mizoram 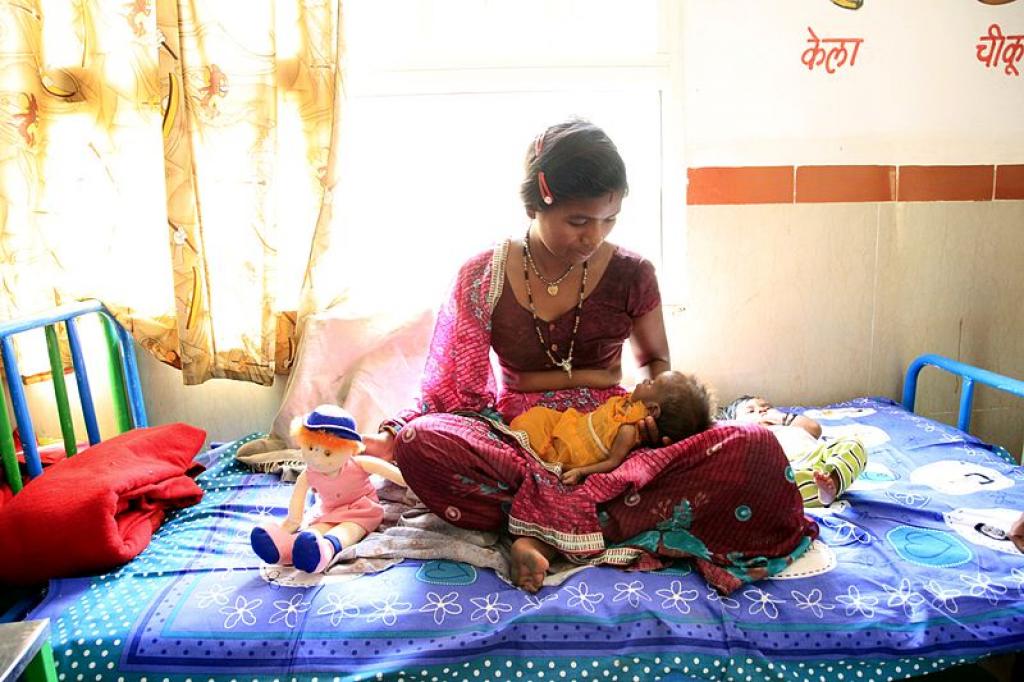 The number of women breastfeeding their newborns within an hour declined in the last five years, according to the recent National Family Health Survey (NFHS).

The women in urban regions of Daman and Diu and Dadra and Nagar Haveli along with Bihar, Gujarat, Sikkim, Telangana and Tripura recorded a dip in the practice.

Out of the 17 states and five Union territories (UT) whose data was released by NFHS 5 (phase l), Dadra and Nagar Haveli and Daman and Diu showed the least percentage of children under three years and who were breastfed within an hour of birth. This was followed by Bihar, Sikkim, Tripura, Telengana and Gujarat.

The highest percentage of children under three breastfed within one hour of birth was registered in Meghalaya, followed by Lakshwadeep, Kerala and Mizoram. 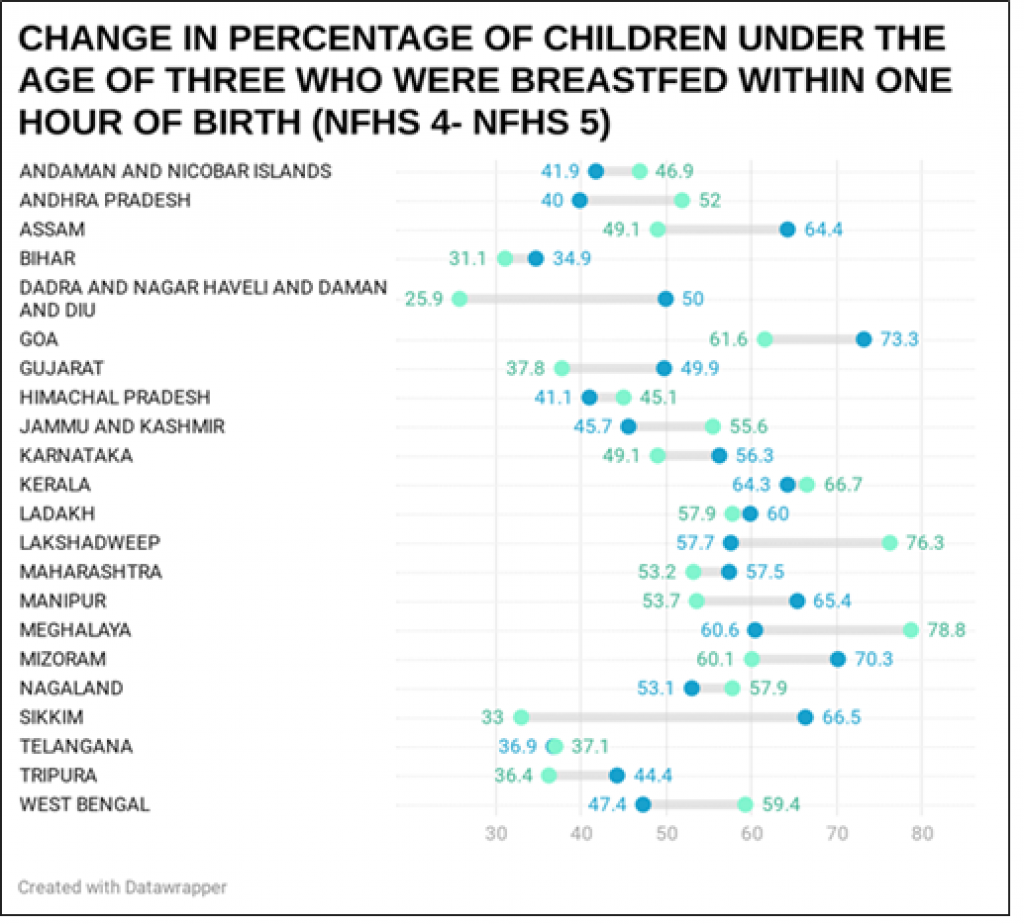 Significant changes in the last five years were seen in Meghalaya and Lakshadweep as well as Sikkim, Dadra and Nagar Haveli and Daman and Diu and Assam. While Meghalaya, followed by Lakshadweep, showed a sharp increase in the percentage of children under three years and who were breastfed within one hour of birth, the rest of the above-mentioned states and UTs showed a noteworthy decrease, especially Sikkim.

Sikkim was followed by Dadra and Nagar Haveli and Daman and Diu and Assam in this context. The percentage of children under three who were breastfed within one hour of birth in Telangana remains almost unchanged.

Overall, it was seen that only 10 states as well as UTs — Andaman and Nicobar Islands, Andhra Pradesh, Himachal Pradesh, Jammu and Kashmir, Lakshadweep, Meghalaya, Nagaland, Telangana and West Bengal — of 22 showed increase in the percentage of children that were breastfed.

Marked differences were observed in Dadra and Nagar Haveli and Daman and Diu, Manipur and Meghalaya. Kerala showed almost no difference in percentage. But it is seen that in 13 states and UTs, the percentage of children in rural areas breastfed within an hour of birth was greater than urban areas. 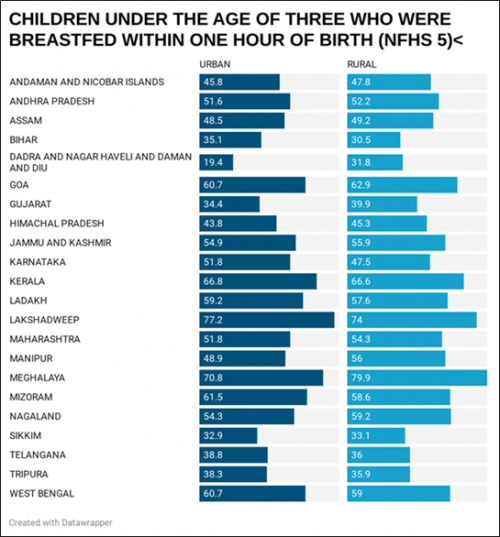 Rural women tend to stick with traditions and breast fed their newborns. But the same is not the case for urban women. And this calls for certain reforms.

Supplementary foods or liquids for infants need to be done away with. Healthcare centres and birth attendants should be well-equipped to educate new mothers on the importance of breastfeeding. Fathers should actively participate and provide aid to the mothers during breastfeeding in hospitals.

Absence of breastfeeding increases the risk of illness in the infant from infectious diseases: 53 per cent hospitalisations occur due to diarrhea, 27 per cent low respiratory tract infection that can be reduced through breastfeeding.

Increased breastfeeding reduces the chances of child being obese. With the increase in technologies, however, the practice is fading.

Oxygen saturation and body temperature were found to be lower in infants fed through bottles than infants who were breastfed. Long-term risks include asthma, childhood cancers and cognitive and brain development.

Mothers who do not breast feed are also at risk: they gain weight, blood pressure, suffer from postpartum depression, cardiovascular diseases and bone health.

The National Family Health Survey (NFHS), since its fourth round in 2015, has been asking women how long after giving birth they started breastfeeding their newborn.

Research has shown that there are significant nutritional, psychological, developmental, immunologic, social and environmental benefits of breastfeeding on mothers and on their children.

The other important benefits include dip in post-partum bleeding and more rapid uterine involution, an earlier return to pre-pregnant weight, delay in resumption that causes increase in child spacing, reduced risk of ovarian and breast cancer.