Latest data suggests a decline in the nutritional quality of food. What is stripping our food of nutrients? Can authorities cope with the challenge? 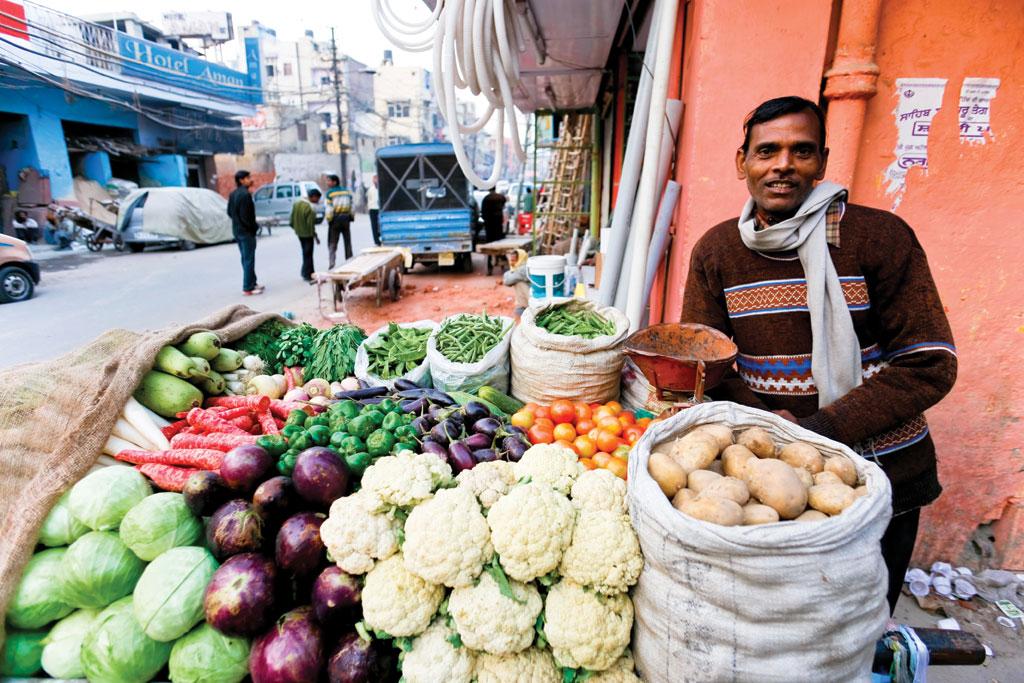 If you thought that your healthy food choices are going to keep you fit and disease-free, think again. The data released by the National Institute of Nutrition (NIN), Hyderabad, on January 18 suggests that the foods we eat today are less nutritious than what we used to consume just three decades ago.

NIN has released such data after a gap of 28 years. In the report, Indian Food Compo sition Tables 2017, NIN researchers have measured the values of 151 nutrients in 528 food items collected from markets across six geographical regions. Down To Earth (DTE) compared the values with NIN’s previous estimation done in 1989. All the food items and nutrients listed in the 2017 report do not find a mention in the 1989 report. But DTE’s snapshot analysis shows an alarming trend: there is a perceptible decrease in nutrition levels in all types of food (see ‘Healthy no more’,).

Consider bajra (pearl millet), which is consumed across rural India and is often referred to as the poor man’s staple food. It is consumed mainly for carbohydrate, which provides energy. DTE analysis shows that carbohydrate levels in bajra have redu ced by 8.5 per cent in the past three decades. In whole wheat, carbohydrates have reduced by 9 per cent. Similarly, pulses are being depleted of their key nutrient—protein, which plays an important role in building, repairing and maintaining tissues. Protein has reduced by 10.4 per cent in masoor (whole brown lentil) and 6.12 per cent in moong (whole green gram).

On the other hand, protein content has increased in food items like snake gourd (by 78 per cent) and rice (16.76 per cent). “Foods like rice are not consumed for their proteins. So this increase may not do much to meet body’s requirements,” says Veena Shatrugna, former deputy director of NIN.

Micronutrients, which are essential for growth and development, have increased in some foods, including masoor and moong and leafy vegetables like spinach. But their levels have significantly reduced in many other food items, particularly in fruits and vegetables. In potato, iron has increased but thiamine (vitamin B1), magnesium and zinc have reduced. The four micronutrients have reduced by an astounding 41-56 per cent in cabbage. In ripe tomatoes, thiamine, iron and zinc have reduced by 66-73 per cent. Iron has reduced by 76.6 per cent in green tomato and by 60 per cent in apples.

Coarse grains, especially millets, are fast gaining popularity among the health-conscious as they come loaded with micro nutrients. DTE analysis shows that the levels of thiamine, iron and riboflavin have reduced in bajra, jau (barley), jowar (sorghum) and maize.

The overall trend suggests a decline in the nutrition value of foods, says Umesh Kapil, professor at the Human Nutrition Unit of the All India Institute of Medical Sciences, New Delhi. However, he cautions against a simplistic comparison of the two reports. “Analytical methods used now are different from those used earlier,” says Kapil.

But in the 2017 report, NIN compares its 1989 data with the nutritional values of major food categories it had measured during the British regime in 1937, and says the nutritional content of many food items had declined during the half-century. The decline is not significant in most cases except carbohydrates in leafy vegetables and vitamin B1 in roots and tubers, it says.

An in-depth comparison of NIN’s 2017 nutritional data with that of 1937 will help understand how much nutrients are now left in our food basket, and how this change will affect the overall nutrition of a person. 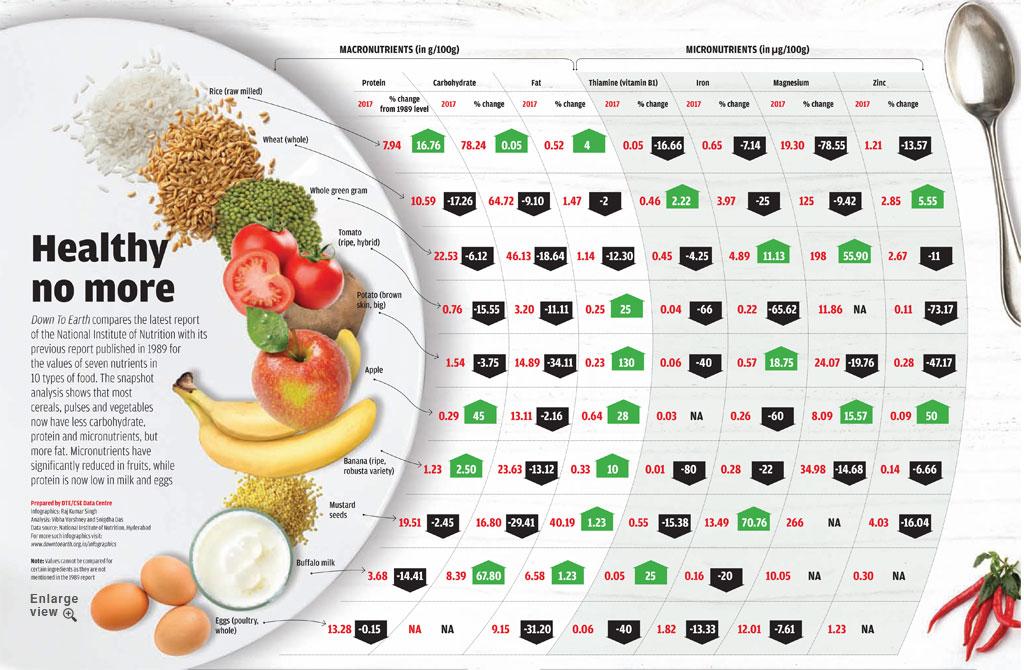 But why the decline?

NIN’s findings have resonance with the global trends. In a 2004 study published in the Journal of the American College of Nutri tion, researchers with the University of Texas at Austin, analysed food composition data for 43 crops grown between 1950 and 1999. Six nutrients—protein, calcium, iron, phosphorus, riboflavin and ascorbic acid—showed a significant decline in almost all the crops. In 1997, a study published in British Food Journal compared the nutritional values of 20 fruits and as many number of vegetables grown between the 1930s and 1980s. It found a significant reduction in the levels of six minerals—calcium, magnesium, copper and sodium reduced in vegetables, while the levels of magnesium, iron, copper and potassium dipped in fruits.

Scientists across the world have identified two reasons for this declining food nutrition. One, intensive agricultural practices have stripped the soil of micronutrients.

This could well be the reason for India where soils have been found deficient in nutrients. An assessment by the Indian Insti tute of Soil Science, Bhopal, shows 43 per cent of the country’s soil is deficient in zinc, 18.3 per cent in boron, 12.1 per cent in iron, 5.6 per cent in manganese and 5.4 per cent in copper. “The NIN data substantiates the impact of intensive agriculture on food nutrients,” says Kapil, adding that the changes could also be due to different varieties of crops cultivated then and now. In commercial cultivation, the focus is now on crops that are high-yielding and disease-resistant, and not on their nutritional content.

A 2015 study, published in Global Change Biology, provides an explanation for this decline. High CO2 levels in the atmosphere lower the nitrogen concentration in plants, which in turn affects the protein content in food. The effect persisted even after the researchers used nitrogen-rich fertilisers on the crops. This suggests lower protein is not due to limited access to nitrogen in the soil.

In all probability, the poor nutritional status is here to stay. So the government should use the latest nutrient values to revise dietary regulations and nutrition, public health and agriculture policies. “We have seen a wide variation in the levels of micronutrients in food collected from different geographical regions. A study of such regional databases will help understand the relation of food with diseases,” says T Longvah, director, NIN. “Long-term approaches, such as exploration of biodiversity, nutritional characterisation and mainstreaming of underutilised foods, and plant breeding are stable and sustainable means of nutritional enhancement of foods,” he says.

Globally, organic cultivation is also being looked at as a solution to the problem. A 2007 study published in Journal of Agricultural and Food Chemistry analysed samples of dried tomatoes kept at the University of California-Davis for flavonoids. The samples included tomatoes grown by both conventional and organic system between 1994 and 2004. Analysis showed that some flavonoids like quercetin and kaempferol were present in higher levels (79 and 97 per cent, respectively) in organic tomatoes.

Experts also suggest a targeted approach for dealing with nutrient deficiency in food. Anura Kurpad, head, Department of Physiology and Nutrition at St John’s Medical College, Bengaluru, says, “If there is a true decline, policies should begin to look at biofortification.”

For this, researchers must analyse the data without delay.