Studies from Africa show that women are more prone to the aids virus than men. This will require reorientating drug research 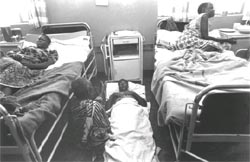 AIDS has long been considered primarily a men’s disease. But late last year, the United Nations reported for the first time that more women than men were infected with the AIDS virus in Africa, the site of the vast majority of such infections in the world. Of the 22.3 million adults in sub-Sahara Africa infected with HIV , the AIDS virus, 12.2 million, or 55 per cent, are women. This kind of data was never available earlier as also the reasons for this shift. It suggests that as HIV was spread in Africa primarily through heterosexual intercourse, the virus passes more easily from men to women than from women to men.

“Ten years ago, it was hard to make people listen when we were saying AIDS wasn’t just a man’s disease,” said Peter Piot, head of UNAIDS spearheading global AIDS control. Infection rates among women are much lower in the United States and other developed countries than in Africa. But more women, primarily in minority groups, are becoming infected through heterosexual sex in US as well.

The new evidence that Africa has six infected women for every five infected men comes from a number of studies in several African countries. Another factor in the shifting demographics in Africa, the report said, is the different age patterns of HIV infection in men and women.

So although women now comprise almost half of new HIV - 1 infections worldwide, ironically much of what we know about this devastating virus has been gleaned from studies of men. New studies have focused on women and new research adds to growing evidence that HIV transmission via heterosexual contact is different for men and women. Women, it seems, are usually infected by many different forms of the virus, men, by just one ( Nature Medicine, Vol 6, No 1).

Julie Overbaugh and colleagues of the Fred Hutchinson Cancer Centre, Seattle, Washington, report this highlighting the gender differences in the HIV type 1 virus. This is an important finding, given that the search is on for an HIV -1 vaccine that will be effective all over the world. It also highlights, as many others studies have done recently, the dangers of extrapolating information about female health and disease from studies on males.

An estimated 70 per cent of all HIV -positive individuals live in Sub-Saharan Africa. So the researchers looked at 10 men and 32 women from Kenya - large numbers in HIV -research terms. All the subjects had similar sexual histories (numbers of partners, involvement with prostitutes and so on) and comparable levels of other sexually transmitted diseases. Sexual transmission of HIV from man to woman results in a more diverse ‘swarm’ of variants than does transmission from woman to man. Overbaugh and her co-workers tried to ascertain which of several possible factors is responsible for the obvious differences in viral transmission. Do women contract a smorgasbord of virus variants because they are being re-infected by multiple partners? Or because more of the variants delivered by one partner are able to successfully take hold? Or because, post-infection, a single virus evolves into myriad forms to evade its host’s immune system?

Overbaugh’s team opted for the second of these. Women are, for some reason, typically infected by multiple viruses from one partner, unlike most men who are infected by only one virus. It is possible that this could have something to do with the area and abrasion of mucous membranes exposed to virus-containing semen in women, or ir could reflect as yet unclear differences between male and female immune systems. The work also hints that the same decrepancy holds good whatever the viral subtype. Almost all infections in the us and many in Europe are subtype B of HIV-1; in Kenya, subtypes A, C and D are more prevalent. At least as far as A and B are concerned, gender seems to hold more sway than viral subtypes; C is still under scrutiny.