Though the government issued guidelines to states to provide food to all eligible children in March 2020, implementation has been lax 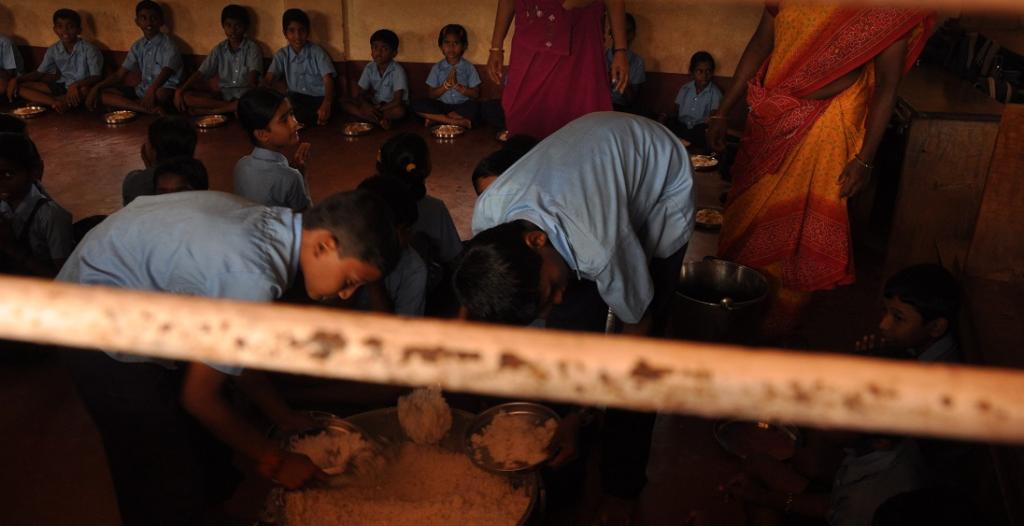 A mid-day meal in a village in Dakshina Kannada district of Karnataka in pre-COVID-19 days. Photo: Savvy Soumya Misra

The novel coronavirus disease (COVID-19) pandemic may have struck a heavy blow to India’s school feeding programme and in turn, may have affected years of progress to tackle malnutrition, especially among children.

The Mid-day Meal Scheme (MDMS) for school children is a legal entitlement in India following the enactment of the National Food Security Act (NFSA) in 2013. Around 116 million children are covered under the scheme.

An analysis of offtake of foodgrains under MDMS during the COVID-19 lockdown reveals that total offtake by all states and Union territories (UTs) for the months of April and May, 2020 was 221,310 tonnes. This was 60,620 tonnes lower than offtake during the corresponding period in 2019.

In terms of the food and nutrition security situation, India already has an unenviable rank of 94 among 107 countries in the Global Hunger Index for 2020. The latest National Family Health Survey-5 reveals high prevalence of malnutrition among children.

According to the Comprehensive National Nutrition Survey (CNNS) 2016-18, 22 per cent children of school-going age are stunted and 35 per cent are underweight. Addressing nutritional deficiencies in this phase of a child’s life is very important for proper growth and development of an individual.

The problem of malnutrition can be traced to lack of dietary diversity.

The map below depicts the states that reported less than the national average consumption of specific foods (milk / curd, pulses / beans, dark green leafy vegetables, roots and tubers and fruits) at least once a week by children aged five–nine years, based on CNNS data.

States with lower than the average consumption of non-cereal foods*at least once a week by children aged 5–9 years, 2016-18 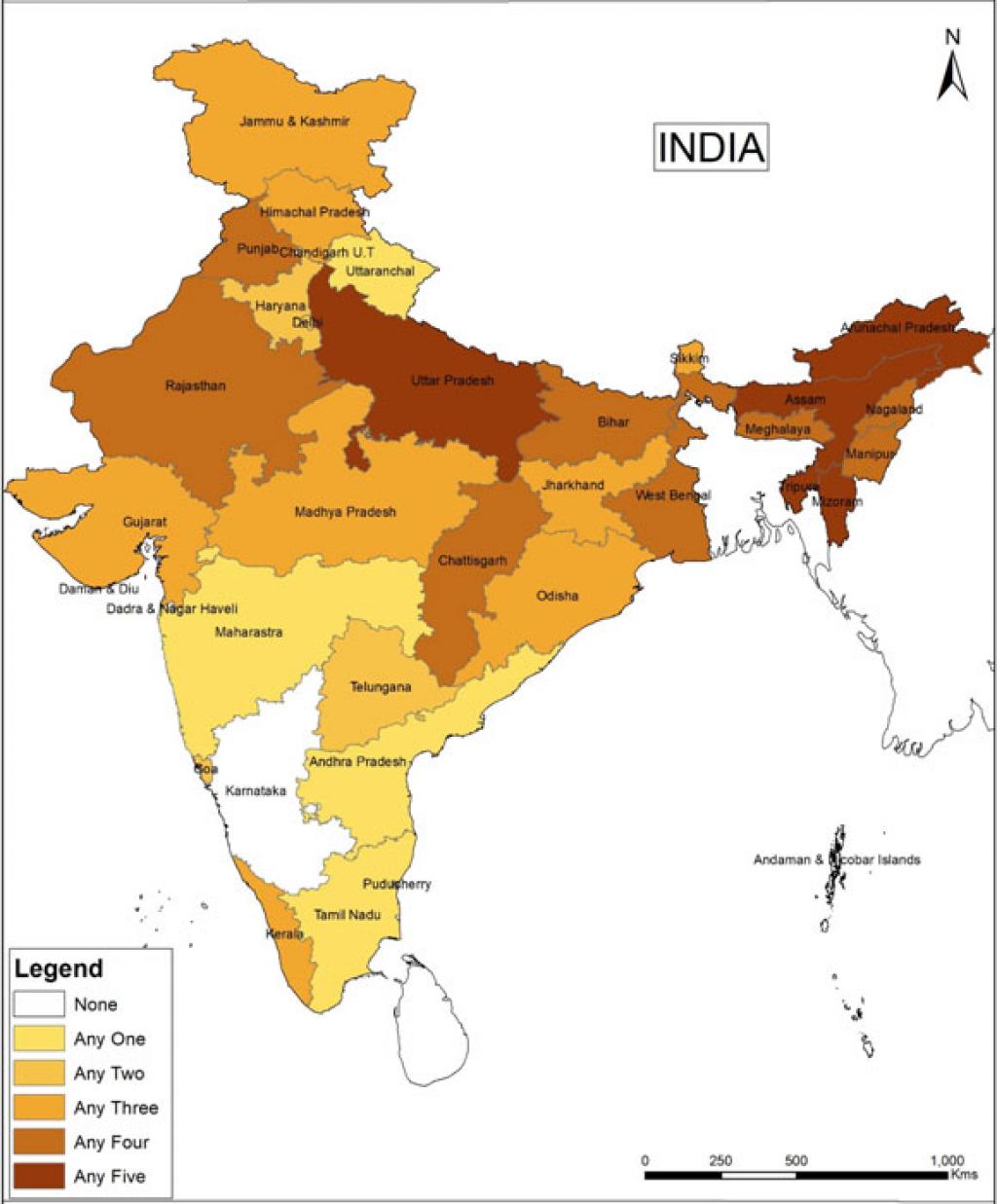 Several evaluations of the MDMS have reiterated the relevance of the MDMS as an important means of providing nutrition to children from vulnerable households and helping improve school enrolment.

Under the programme, every child at the primary school level is entitled to a hot meal that comprises 100 grams of foodgrains, 20 grams of pulses and 50 grams of vegetables to provide 450 calories and 12 gram of protein.

At the upper primary level, the child is entitled to 150 grams of foodgrains, 30 grams of pulses and 75 grams of vegetables to provide 700 calories and 20 grams of protein, meeting at least one-third of the daily nutritional requirement.

Many states like Maharashtra, Kerala, Tamil Nadu, Tripura and Puducherry also provide added nutrition from their own resources. There are however lacunae in delivery, with varying degrees of efficiency seen between states.

Following the COVID-19 pandemic crisis and closure of educational institutions, the Government of India issued guidelines in March 2020. The guidelines advised all states and UTs about providing hot cooked meals or food security allowance comprising of foodgrains and cooking costs (or its equivalent pulses, oil, etc), to all eligible children covered under MDMS during closure of schools.

This was extended to cover the summer vacation period vide the letter issued April 29, 2020 as ‘a one-time special measure due to COVID-19’ so as ‘to enable them to meet their nutritional requirement and to safeguard their immunity which is very vital during COVID-19 pandemic’.

Following the continued closure of schools, the measure was extended in July to continue till the time schools reopen.

While the guidelines were issued, delivery on the ground was lax. A state-wise analysis of offtake of foodgrains by states, available in the monthly bulletin of the Food Corporation of India shows a sombre picture.

Of the 36 states and UTs in India, 15 including large ones like Rajasthan, Madhya Pradesh and Odisha reported a decline in their offtake of foodgrains under MDMS in the months of April and May 2020 compared to the same months in 2019.

Moreover, 27 states and UTs reported lower offtake for primary children in 2020 compared to 2019. Madhya Pradesh for instance, had an offtake of 10,920 tonnes of foodgrain in April-May 2019, but had zero offtake during the same months in 2020.

An analysis in June 2020 found that of 36 states and UTs, eight had taken no action on the guidelines issued, the programme was non-functional in nine states / UTs and no information was available with regard to another five.

This is a grim foreboding for the future of India’s children. An appeal by UNICEF in July 2020 stated that nearly 1.19 billion students in 150 countries continued to be affected by school closures.

Vulnerable and hard-to-reach children, including adolescents were in danger of dropping out of the education system altogether because of significant inequities in access to remote learning widening the education gap, according to the appeal.

With the closure of schools, 369 million children had missed out on school meals and many of these children relied on these meals as a source of daily nutrition.

The National Human Rights Commission issued an advisory on ensuring food and nutrition security during COVID-19 in late September 2020 that included restarting the MDMS for children.

Proactive measures by state governments with help of local panchayats and civil society organisations to have schools resume serving the hot cooked meal on priority to children of school-going age, rather than wait till schools reopen, would have been very welcome.

This would particularly benefit children from low income households for whom an assured hot cooked meal a day is of great help for sustaining their nutrition status.

The COVID-19 pandemic has also brought home the importance of local solutions like nutrition gardens of fruits and vegetables in schools. The pandemic should not derail the progress made over the years in nutrition programming and delivery to the most vulnerable. Having such a perspective is crucial for ensuring a healthy future for our children. We may however already be late.