Sprinter Dutee Chand makes a spectacular comeback after facing ban in 2014 for failing an androgen test. What is sex testing all about? 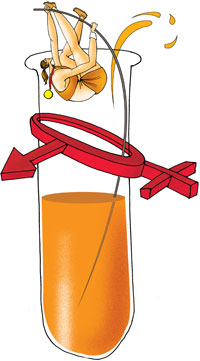 Till June 2014, Dutee Chand was the next big thing in Indian athletics. Touted as the next P T Usha, Chand had broken a 14-year-old national junior record in the 100 metres race in May that year and won two gold medals at a junior Asian athletics meet. But in June end, an androgen test sent her aspirations crashing.

The test is the latest means adopted by the International Association of Athletics Federation (IAAF) to weed out what it believes are male interlopers in women’s sporting competitions. Adopted in 2011 by IAAF and ratified by the International Olympic Committee a year later, the tests use testosterone levels to decide whether an athlete is feminine enough to take part in women’s competitions. An athlete can compete in this category only if her testosterone levels are below the normal male range— a little over 3 ng/ml.

Chand failed the test. In medical parlance, the 18-year-old has hyperandrogenism, a condition in which a woman’s body produces more than normal levels of androgens—particularly testosterone.

Both men and women’s bodies require androgens, the latter in smaller quantities. These hormones are responsible for masculine features such as beard and deep voice. But they are also responsible for positive protein balance, sexual desire, and general well being. They hold the key to muscle strength—a function that IAAF has latched on to in its latest approach to ensure a level playing field in women’s competitions.

Androgen levels in some women can match that of men. Results of the test Chand was subjected to put her in that category. “Androgenic hormones have performance-enhancing effects, particularly on strength, power and speed, which may provide a competitive advantage in sports,” notes a Standard Operating Procedure adopted by the Sports Authority of India two years after IAAF’s rule came into effect.

Internationally, the androgen test has faced criticism. “What makes sex testing so complicated is that there is no one marker in the body we can use to say, ‘This is a man,’ or ‘This is a woman,’” says Katrina Karkazis, a medical anthropologist and senior research scholar at Stanford University’s Centre for Biomedical Ethics. “IAAF is trying to get around that complexity by singling out testosterone levels as the most important aspect of athletic advantage. But athletic advantage cannot be reduced to testosterone levels,” she argues. Rebecca Jordan-Young, associate professor of women, gender and sexuality studies at Columbia University and Karkazis’ collaborator on a Stanford University paper on the IAAF policy, argues, “Hyperandrogenism is just another medical condition. There are many biological reasons some athletes are better than others. Several runners and cyclists have rare mitochondrial variations that give them extraordinary aerobic capacity. Many basketball players have acromegaly, a hormonal condition that results in exceptionally large hands and feet. Such biological differences don’t cause them to be barred from competition.”

The concern of sports bodies about men masquerading as females in sports is not a new concern. It dates back to the late 1930s and early 1940s. Amongst those who earned bad press was Mary Louise Edith Weston, whose exceptional performance in the women’s shot put, javelin and discuss throws in the late 1920s and early 1930s earned her the nickname “Devonshire Wonder”. Upon retirement, the British athlete underwent a series of surgeries. Now called Mark, the Devonshire Wonder became the whipping horse of sporting authorities. Then there was ZdenekKoubek, the holder of the women’s world record in 800 metres in 1934 who, after giving up competitive sports in 1936, took up a career in cabaret and asked to be recognised as a man. For many sports administrators, athletes like Weston and Koubek were interlopers in women’s sports.

There were demands for compulsory sex tests in international competitions. In 1946, IAAF introduced a rule requiring a gender certificate from female competitors. By the 1960s, this process was deemed too lenient. Gender testing was introduced at the 1966 European Track and Field Championship where female athletes were asked to undergo a visual examination of their sexual features.

Around the same time, IAAF also used rudimentary chromosomal tests to determine the presence of an X or Y chromosome. Polish sprinter Ewa Klobowska was amongst the first to have her femininity questioned on the basis of such test. Klobowska, who won a gold and a bronze medal in the 1964 Tokyo Olympics, had an XX/XXY mosaicism, a genetic order. She was disqualified in 1967 because the test revealed that she had one “chromosome too many”. The precise nature of her anomaly was never made public.

IAAF continued with the chromosomal tests. They were, however, refined and called Barr Body tests, which rested on the premise that women have two X chromosomes while men have one X and one Y chromosome.

In the mid 1980s, the high profile case of the Spanish hurdler Maria Martinez Patino highlighted this test’s shortcomings. Patino failed a Bar Body test at the World University Games in Kobe, Japan, in 1985. She had an X and Y chromosome, like a male, but due to a hormonal problem—androgen insensitivity disorder—her body did not produce testosterone, which caused her to develop as a woman. She was reinstated six years later. But her best days as an athlete were behind her. She missed qualifying for the 1992 Olympics by a whisker.

After the embarrassment it faced in Patino’s case, IAAF dropped sex testing in the early 1990s. The Olympic Council followed suit in 2000. Tests were conducted only on complaints. The issue exploded again in 2009 when a South African runner, Caster Semeneya, won a gold medal in 800 metres at the world championship in Berlin.

Some players complained that Semenya looked extremely masculine. IAAF ordered sex testing, the results of which were not released. Semenya was allowed to keep her medal.

Indian athlete Santhi Soundarajan’s fate was far grim. The 2006 Asian Games silver medallist failed a gender test and was stripped of all medals and records.

Karkazis and Young question the practice. “There is insufficient evidence to set a benchmark for normal testosterone levels in female athletes, let alone persuasive research showing that testosterone levels are a good predictor of athletic performance,” they argue.

With inputs from Jyotsna Singh