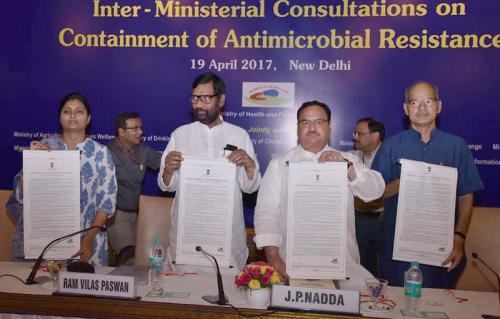 India has finalised its National Action Plan to combat antimicrobial resistance (AMR), announced the Union Minister of Health and Family Welfare, J P Nadda, on April 19. Nadda said the government is ready with a blueprint which meets global expectations and that AMR needs to be addressed comprehensively under the “One Health Approach”.

Other ministers present at the meeting were Ram Vila Paswan, Minister of Consumer Affairs, Food and Public Distribution, Anil Madhav Dave, Minister of Environment, Forest and Climate Change and Anupriya Patel, Minister of State for Health and Family Welfare. The ministers also signed a “Delhi Declaration” to strategise collectively on AMR, which calls on the World Health Organization (WHO) and Food and Agricultural Organization (FAO) of the United Nations to help implement the national and state action plans on AMR.

Underlining the efficient implementation of the action plan as a challenge, Nadda spoke of the need for a coordinated approach on all levels of antibiotic use.

Amit Khurana, senior manager of the Food Safety and Toxins Programme at Centre for Science and Environment concurred. He said, “It is a significant step in India’s fight against AMR. It is a comprehensive and ambitious plan. The effective implementation of the plan requires multi-ministerial involvement and it is necessary to focus on both animal and environment dimensions of AMR.”