India gasps for oxygen: How some states are holding up 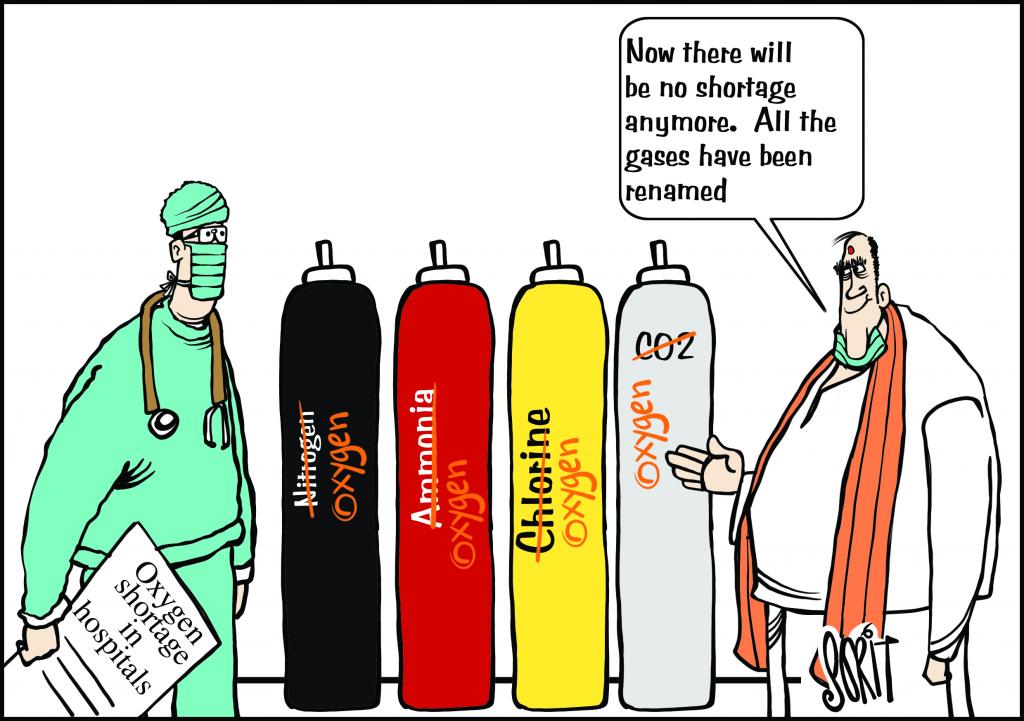 The raging second wave of the novel coronavirus disease (COVID-19) pandemic has left India asphyxiated: A shortage of medical oxygen in hospitals as well as outside have considerably contributed to the toll.

More than 200,000 people have lost their lives already. Crematoriums and graveyards have surpassed capacity amid a collapse of the administration.

Governments at the Centre and states seem to be in denial. Down to Earth took stock of several affected states / territories.

Twenty-five patients succumbed to asphyxia in the Capital’s reputed, Sir Ganga Ram Hospital April 23 due to a shortage of oxygen. Hospital authorities publicly appealed for help.

Soon after, medical officers of established private hospitals like Max, Moolchand, Mukund, etc also appealed to the government to immediately arrange for oxygen amid dipping stocks.

Chief Minister Arvind Kejriwal breached protocol and live-streamed a conference of CMs with Prime Minister Narendra Modi. He was seen telling that Delhi needed 700 tonnes of oxygen a day, but was allocated only 480 tonnes by the Centre and was receiving only 378 tonnes.

The situation has remained the same despite prime ministerial assurance. Sources have cited incidents where families looking for oxygen for patients at homes have been asked to shell out up to Rs 85,000 for a single cylinder.

The situation seemed to be worse in neighbouring Uttar Pradesh, India’s most populous state. The lack of oxygen has compelled small hospitals to stop taking in more patients. Rather, several have requested for their patients to be transferred to bigger hospitals with better facilities.

UP had been receiving oxygen from plants in Kashipur, Gazipur, Modinagar (Inox Air), Panipat and Roorkee; but that has clearly not been enough.

The state needed 960 tonnes of the gas, but could manage only 650 tonnes. It even planned a train to ferry oxygen from Bokaro, Jharkhand. Rather than trying to arrange for more, the Adityanath government announced an oxygen audit with the help of the Indian Institutes of Technology Kanpur and Varanasi.

The crisis has derailed medical services in Haryana, including the ‘medical hub’ of Gurugram — part of the National Capital Territory. Big private hospitals have been among those struggling to keep up with the demand for oxygen.

The demand in the city has shot up to about 14 tonnes from 6-8 tonnes. For the entire state, the demand nearly doubled to 120 tonnes.

State Drug Controller Narendra Ahuja said Haryana has four oxygen plants manufacturing 272 tonnes a day. The state keeps 162 tonnes and sends 140 tonnes to Delhi, 20 tonnes to Punjab and the rest to UP.

The state earlier received liquid oxygen from an Inox Air plant in Bhiwadi. It stopped after the Centre took control of the plant, said a local gas supplier. He added that the state would run out of stock by the end of this week, unless corrective measures were not taken.

Several patients reportedly died due to oxygen shortage, which the state government tried to blame on the gas being delivered at lower than optimal pressure.

CM Shivraj Singh Chouhan said recently said the state faced a shortfall of a quarter of its demand despite the Centre increasing its allocation to 643 tonnes.

The state government announced that it would set up plants in Bhopal, Rewa, Indore, Gwalior and Shahdol for Rs 1.60 crore. But plants it promised earlier in Babai, Mohasa — at a cost of Rs 125 crore for producing 210 tonnes — has not fructified in seven months.

CM Bhupesh Baghel announced the state would provide oxygen to others. It supplied (April 11-19) to:

Oxygen shortage in hospitals has endangered the lives of COVID-19 patients in the PM’s home state too.

There were 52,036 patients on oxygen support, the state government informed the Gujarat High Court April 26. Demand skyrocketed to 1,000 tonnes (April 24) from 58 tonnes (March 15).

Most agents who refill oxygen put up out-of-stock notices.

Around 70 per cent hospitalized COVID-19 patients need oxygen support, said Sunil Popat, director of Nidhi Hospital. The staff have to queue up, at times for more than eight hours, to secure supply.

Indian Medical Association representatives wrote to Gujarat CM Vijay Rupani, requesting immediate supply and said hospitals would be forced to discharge patients if the situation did not improve.