Salmonella is the causative agent of typhoid and gastroentritis 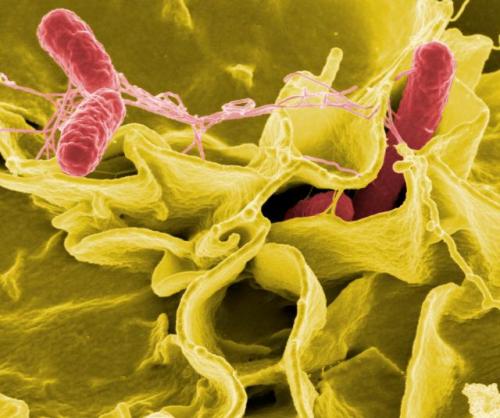 Many disease-causing bacteria are insidious. They try to imitate or manipulate intracellular structures of human cells for their own growth and survival. Indian biologists are trying to decipher how these pathogens manipulate host cell proteins to survive and proliferate to make humans sick.

Among the bacterial pathogens which use human proteins for thriving are Mycobacterium tuberculosis which causes tuberculosis and Salmonella enterica typhimurium, causative agent of typhoid and gastroenteritis.

A team led by Mahak Sharma at the Indian Institute of Science Education and Research (IISER), Mohali has uncovered the mechanism of how Salmonella manages access to membranes and nutrients in human cells through structures (known as lysosomes) that hold a variety of proteins for its own growth and survival.

According to the study, pathogens have evolved several tactics to manipulate the activity of host proteins, all aimed at creating their intracellular replicative niche (known as a vacuole). For example, M. tuberculosis sucks iron and other nutrients from the host cells to prevent degradation of its own niche. On the other hand, Salmonella acquires both membrane and nutrients within a mature acidic vacuole. It avoids bacteria-killing enzymes by rerouting them out of the host cell as well as by forming an extensive network of membranes with its vacuole that dilutes these enzymes.

“We are trying to understand how lysosomal proteins; specifically the small GTP-binding proteins and their effectors facilitate cargo delivery to lysosomes. Previous studies have shown that Salmonella vacuole acquires several characteristics of the host cell lysosomes for nutrient access from this organelle but the mechanism at play was not known,” Sharma told India Science Wire.

Amit Tuli of CSIR-IMTECH, Chandigarh, who collaborated for the study, further explained that “Salmonella-containing vacuole (SCV) does not inhibit maturation of its vacuole but rather acquires several features of host lysosomes. Indeed, acidification of the vacuole is required for production of virulence factors that in turn help Salmonella to acquire both membranes and nutrients from the host endosomes and lysosomes.”

Researchers say Salmonella secretes a protein known as SifA that recruits a host chemical, HOPS complex, to SCV membranes. Recruitment of HOPS complex is a key step leading to docking and fusion of SCVs with host endosomes and lysosomes. Blocking HOPS function prevents Salmonella replication inside its vacuolar niche but cutting off nutrient supply.

“Based on our findings, we envision that small molecules or peptide-based inhibitors that specifically block the interaction of Salmonella protein SifA with host factors including HOPS complex can potentially prevent Salmonella replication and infection in the human host,” added Sharma.