Complications and new disease connections are holding back eradication 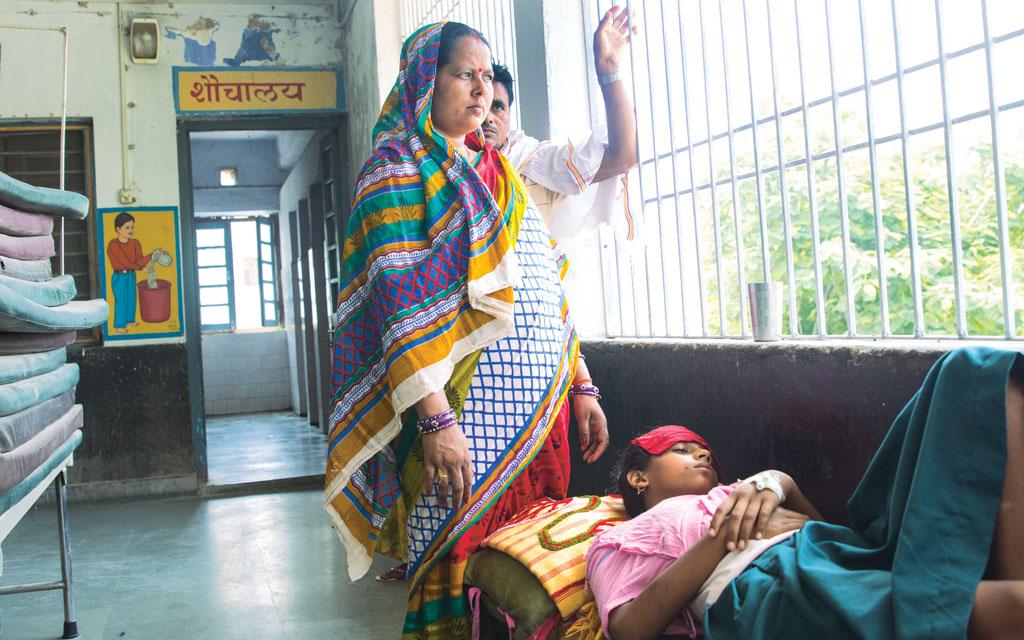 A patient afflicted by the kala-azar infection. It has been observed that nearly all drugs administered to treat kala-azar are leading to complications (Photo: Srikant Choudhary)

Nine-year-old Nikki Kumari of Sar-gatti village, Saran district, Bihar, was diagnosed with kala-azar (also known as Visceral Leishmaniasis, or VL) three years ago. After undergoing treatment for 28 days, her fever and weakness began to subside. But in April this year, Kumari was diagnosed with Post Kala-azar Dermal Leishmaniasis (PKDL), a complication of kala-azar, in which the disease-causing protozoan invades the patient’s skin cells. These cases act as reservoirs of the pathogen.

Kumari is a new addition to the kala-azar registry. The disease was supposed to have been eradicated in 2010. Now, the new deadline is 2017. The disease is transmitted by the bite of female sandflies. Though there has been a decline in the number of cases—from 25,222 in 2011 to 6,280 in 2015—new cases associated with kala-azar complications are emerging. In January this year itself, about 340 primary kala-azar cases were reported in Bihar, a state which accounts for nearly 76 per cent of all cases in the country—33 of its 38 districts are affected. PKDL may not be life-threatening, but it deserves attention as people suffering from PKDL are reservoirs of the infection and can hamper eradication goals.

Though not quantified by government, there has been a steady increase in the incidence of relapse, HIV-VL co-infection and PKDL cases. About five per cent of primary kala-azar cases develop PKDL, according to estimates.

“We have been focusing on the primary kala-azar, but not on the medical complications associated with it,” says Gaurab Mitra of Médecins Sans Frontières (MSF), which runs a kala-azar ward in Vaishali Hajipur district hospital. “We don’t understand these complications as well as we understand the primary kala-azar,” says Pradeep Das, director of Rajendra Memorial Research Institute (RMRI) in Patna.

Worryingly, about 2-3 per cent of PKDL patients did not have primary kala-azar, says Das.

The problem with PKDL begins at the diagnosis stage itself. Unlike primary kala-azar, PKDL cannot be diagnosed by the trademark rapid diagnostic kits. So a skin snip examination becomes critical. For diagnosis of relapse, a bone marrow/splenic aspirate examination is required. But not all Primary Health Centres (PHC) are equipped with such diagnostic tools.

PKDL requires a longer course and greater quantity of drugs than primary kala-azar. At present, hospitals use 100 mg miltefosine for 12 weeks or a total dose of 30 mg/kg body weight of ambisome spread across three weeks by an infusion of 5 mg/kg per day two times per week, as per the 2012 World Health Organization (WHO) guidelines on diagnosis and management of PKDL. But it has been observed that nearly all drugs administered to treat primary kala-azar lead to PKDL. “Even the highly-effective single-dose ambisome leads to the development of PKDL in 3.3 per cent of the cases,” says Das. RMRI is now testing a combination of therapies to check how many patients develop PKDL.

To counter kala-azar and its complications, state government agencies, along with several non-profits, are implementing various strategies for early diagnosis and treatment, vector management, surveillance and social mobilisation. Since high fever, for more than 15 days in a patient from an endemic area, is the primary symptom of kala-azar, most cases are detected by being on the lookout (active case detection) rather than by patients reporting on their own (passive case detection). For instance, PHCs pay R300 to health workers to trace each kala-azar patient. One of the complications arising out of kala-azar is the HIV-VL connection. “The state government’s strategy is that all kala-azar patients are now tested for HIV, and HIV patients with symptoms of kala-azar are tested for kala-azar,” says Mitra. The current treatment for co-infection is the simultaneous use of kala-azar and Anti-Retroviral Therapy drugs.

In collaboration with MSF in Hajipur, RMRI is working on a new treatment method for HIV-VL co-infection. “Not many studies have been done on HIV-VL co-infection globally. This evidence-based treatment report of 120 patients will be sent to the government for consideration,” adds Das.

The state government has taken some steps to beef up its efforts. To contain the vector—sandfly—the shifting from spraying DDT to Synthetic Pyrethroid (SP) has shown great promise. “We observed that the sandfly had become resistant to DDT,” says Das. Further, RMRI has developed insecticide quantification kits. In this, a scotch tape is pasted on a wall sprayed with SP and then dissolved in the solvent. In less than one hour, the colour of the tape gives an indication of the quantity of insecticide sprayed on the wall.

“SP has allowed for greater coverage because it doesn’t smell like DDT and leaves no stains on walls. People have no qualms getting their house sprayed with SP,” says Rekha Sinha, a medical officer at the Bidupur PHC in Vaishali. She adds that spraying of SP had a major role to play in reducing the number of VL cases in her PHC—from 18 in 2015 to just three cases until May 2016. Experts say that the pesticide should be sprayed even outside human habitations. In a paper published in the journal Parasites and Vectors in January 2016, researchers ran mathematical models to figure out whether kala-azar could be eradicated from the Indian subcontinent within the new deadline of 2017. They tested the current control strategies and found that elimination is feasible only in low and medium endemic settings with optimal indoor residual spraying. In highly endemic settings and settings with sub-optimal indoor residual spraying, researchers say additional interventions would be required.

Though half a dozen vaccines are in the pipeline, only three have passed the clinical trial stage. While researchers are looking for medical solutions, the implementation of multi-strategies to contain the vector may help reduce the number of cases. What could also help achieve greater success is learning from the gaps in the current models and strategies and filling in with additional interventions. Because patients such as Nikki Kumari need to be saved from the clutches of a disease that is changing its colour and claiming more victims.

The story was published in the 16-31 July issue of Down To Earth magazine.