Of the 106 species of leafy vegetables consumed in southern Odisha, 78 are wild species—each with a distinct taste and medicinal property 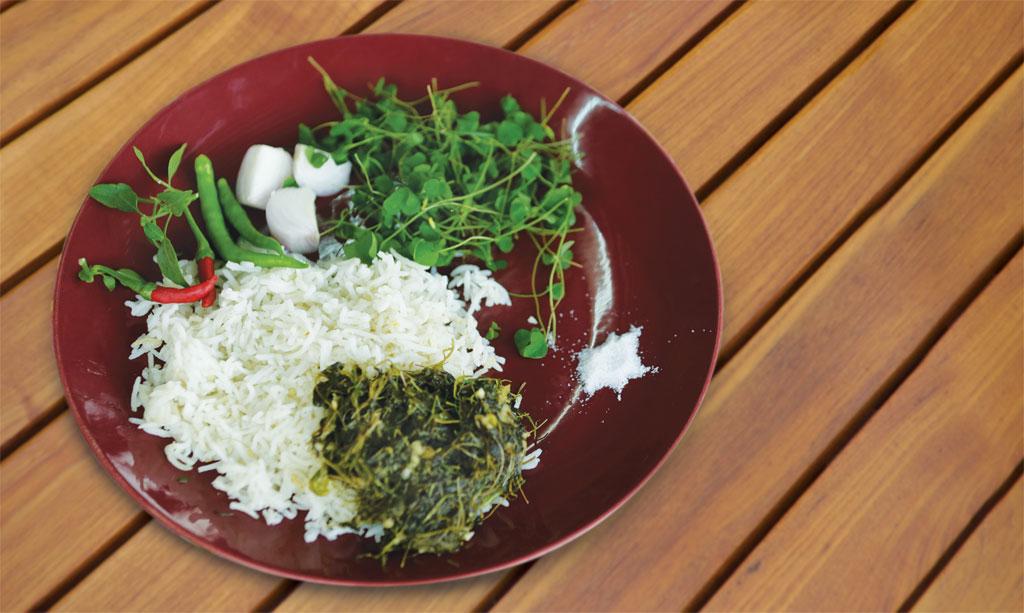 The Ambiliti saaga has a sour taste and can help relieve scurvy and skin disorders (Photo: Srikant Chaudhary)

As winter sets in, the fragrance of leafy greens fills the kitchens across Odisha. This is the time when nature is bounteous, and a variety of potherbs can be found growing in kitchen gardens, roadsides, grazing fields, undergrowths in forests, along water bodies… almost everywhere. The leaves are no longer spoiled by moisture or infested with germs and worms. And saaga bhajaa (cooked green leaves) becomes a regular feature on the menu of Odias.

People in Odisha typically relish a wide variety of potherbs, both domesticated and wild. While they have a cultural significance—saaga bhajaa is an integral part of the platter offered to deities during festivals—they play an important role in the food and nutritional security of those living in rural and tribal areas.

“Leafy vegetables are considered primary food class because they are photosynthetic tissues with high levels of vitamin K and food value in comparison to other fruits and vegetables,” says an ethnobotanical study conducted in the southern districts of the state by the Berhampur University.

Besides, these greens are inexpensive. Of the 106 species of leafy vegetables consumed in southern Odisha, 78 are wild species— people simply collect these greens when they are grazing animals, gathering fuel and fodder or fetching water. Fifteen of the species are wild as well as domesticated and 13 are under cultivation, notes the study published in the International Journal of Agricultural and Food Science.

These greens not only make a quick meal after a hard day’s work—saaga bhajaa is prepared by simply stir-frying the greens and is best enjoyed with rice, especially pakhala bhaata (rice soaked in water overnight)—they bring variety to the menu. While some greens are crunchy, others are smooth in texture. Then there are greens that are sour and some that taste bitter. Most people in rural and tribal areas are aware of their therapeutic values.

Take, for instance, the red hogweed or Boerhavia diffusa, which grows during the monsoon and post-monsoon period. It is said to cure asthma and cough, says the Berhampur ethnobotanical study. The Central Council of Research for Homeopathy underscores this folk knowledge, and says that the juice extracted from its roots can help cure urinary disorders, leukorrhea, rheumatism and encephalitis.

Sessile joyweed or Alternanthera sessi lis is another weed that is known to help increase the flow of bile in the intestine and stimulate lactation. The International Union for Conservation of Nature (IUCN) says it can be used to treat diarrhoea, dysentery, fever and inflammation of the intestines. Then there is Commelina benghalensis (Bengal dayflower or kaniseera), a tiny plant with beautiful purple flower that can easily be spotted across paddy fields. Ethnobotanical studies show that the weed, kaniseera, helps alleviate constipation and rheumatic pain. The Kani tribal community of the Western Ghats uses its leaves, latex and the powder of roots to treat leprosy, says an ethnobotanical survey published in the Global Journal of Pharmacology in 2015.

The plant is also effective against several bacteria, including those that cause typhoid and dysentery, because it contains high levels of antioxidants, lutein and beta-carotene, says a study published in Der Pharmacia Sinica in 2011.

Those looking for a change in taste can go for the three-foliolate creeper which has delicate yellow flowers. Called Oxalis corniculata or creeping wood sorrel, this plant is sour in taste (see ‘Ambiliti saaga’). It has all the essential nutrients required for good health. Being high in vitamin C and potassium, it helps relieve scurvy and skin disorders. A review published in the International Journal of Pharmaceutical Sciences and Research in 2015 says the plant is rich in carbohydrates, crude protein and crude lipid, and can be used as an alternative vegetable during an emergency.

Water clover or Marsilea minuta is a similar looking four-foliolate plant, but thrives in an entirely different ecosystem. This fern grows abundantly in shallow pools, along rivers, canals and ditches and in paddy fields. One can occasionally find the fronds, called sunsunia in Odia, being sold in village markets. It is said to be rich in protein and minerals.

Unfortunately, high-yielding greens such as spinach, lettuce, fenugreek and amaranth are fast replacing these invaluable wild greens. This not only limits our food basket of leafy vegetables, but we could lose the traditional medicinal knowledge associated with each of the greens forever.

These wild leafy vegetables can strengthen our nutritional and food security, and provide important cues for developing policies on sustainable utilisation of natural resources for human sustenance, say botanists from Chandbali College in Bhadrak and S N College in Kendrapara, who have documented the ethnobotanical knowledge associated with leafy vegetables consumed in Bhadrak district.

Their study, published in Scientia Agriculturae in September 2015, reveals that these wild greens are also being threatened by several anthropogenic and natural causes such as land-use changes, habitat destruction, unscientific harvesting, overgrazing and invasive species.

Commercial cultivation of these wild greens will not only help improve the economic and nutritional condition of people, but also help in conserving biodiversity.