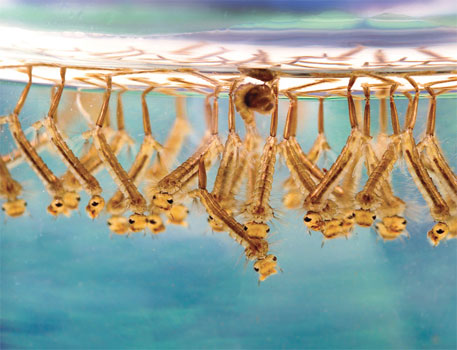 In a paper published online on September 12 in RSC Advances, the researchers showed that when mosquito larvae ingested the nanoparticles, their metabolism slowed down, they did not attain the pupal stage and slowly died. The nanopowder could be of immense use in managing mosquito larvae breeding sites.

The researchers used wood wool, readily available at any carpenter’s workshop, to produce the powder. The process was similar to that of making kajal. The researchers used two earthen pots—one to keep wood wool and the other to cover it. The wood wool soot deposited on the upper pot was scraped out and washed with acetone. The washed soot was then air dried and oxidised with nitric acid to obtain wsCNPs.

The nanoparticle was tested on three types of mosquitoes–Anopheles, Aedes and Culex. To monitor the growth and life cycle, optical fluorescence microscope was used for imaging. One-day-old larvae were cultured in three laboratory aquariums. The larvae were administered variable doses of wsCNPs (0.5, 1, 2 and 3mg/l). It was found that a dose of 3mg/l arrested the growth of mosquito beyond the larval stage and after four weeks the larvae perished.

To test for toxicity, a year-long study was conducted on zebrafish which were fed wsCNP-ingested dead mosquito larvae. No adverse effects were reported. According to the authors, carbon nanomaterials do not get absorbed by body tissues and may not possess the threat of entering the food chain. In the US, carbon produced from burnt vegetables is approved by the Food and Drug Administration and isÃ”Ã‡Ãªused in a homeopathic gripe water for infants.

“The idea of testing nano carbon for mosquito larva emerged as an off-shoot of a previous work on cancer drug delivery. We were studying this using fruit flies and mosquitoes when we observed this effect of the nano particle,” says Sabyasachi Sarkar, chemist and co-author of the study.

“The process of making 3mg of wsCNPs, excluding labour costs, came close to less than a rupee. It took a couple of hours to wash the soot with acetone and an overnight treatment with nitric acid. Overall the material synthesis took three days,” Sarkar told Down To Earth.

David Sullivan, associate professor of microbiology and immunology at Johns Hopkins Malaria Research Institute, US, says the study looks promising enough to be tested in field. However, he also says that further research is needed to assess if the water treated with wsCNPs is fit for drinking after purification.