Mosquitoes in a warming world: A losing battle?

In a warming world, viruses and their mosquito vectors are fast acquiring traits to gang up on humans 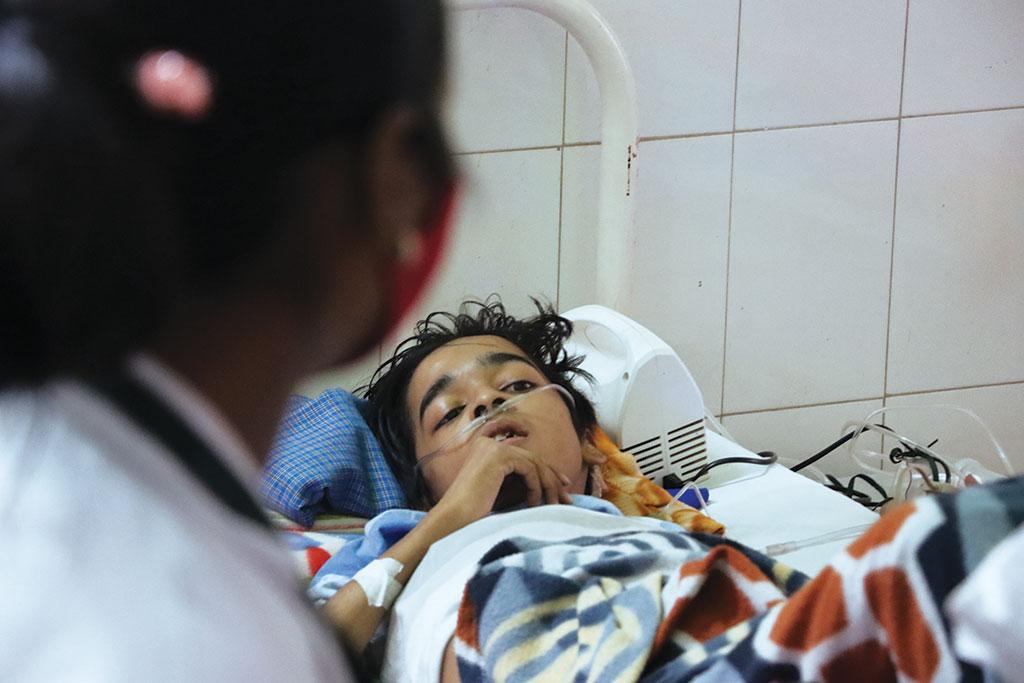 The Uttar Pradesh government set up a ward for Zika patients at Kashiram Hospital on November 1 (Photograph: Suyash Shadiza)

With distinct white bands on their bodies and legs, Aedes mosquitoes are originally found in tropical and subtropical parts of the world. Though most serious diseases such as dengue, chikungunya, yellow fever and zika are transmitted by just two species — Aedes aegypti and Aedes albopictus — these are fast emerging throughout the world as a public health threat.

A aegypti is native to sub-Saharan Africa, and in its native environment it lives in tree holes and small pools of water and bites non-human primates. It is believed that these mosquitoes first moved to nearby human habitations during droughts when the tree holes dried up. The mosquitoes then moved out of Africa during the transatlantic slave trade. The first case of yellow fever was reported outside Africa in Yucatan, central America, in 1648.

Similarly, A albopictus is native to tropical southeast Asia, where it was originally a forest species that fed on wild animals. It first spread to the islands in the Indian and Pacific Oceans and then during the 1980s extended its range across temperate regions in Europe, Africa and the Americas.

Also read Mosquitoes in a warming world: Aedes the menace

While human-made conditions have made it easy for the mosquitoes to spread over larger areas, global warming has further aided in their proliferation as warm and wet environments are excellent places for mosquitoes to breed.

A modelling study published in Nature Communications on May 1, 2020, shows that the world became about 1.5 per cent more suitable per decade for the development of A aegypti during 1950-2000. It predicts that the trend is likely to increase to 3.2-4.4 per cent per decade by 2050.

By 2050, 49 per cent of the world’s population will live in places where A aegypti and A albopictus are present if greenhouse gas emissions continue at the current rates. This was explained by researchers in Nature Microbiology on March 4, 2019 using historic data on the distributions of these two mosquito species over time in Europe and the US.

Also read Mosquitoes in a warming world: The 3 fearsome diseases

Under current climate conditions and population densities, both mosquito species will continue to spread globally over the coming decades. A aegypti is predicted to spread within its current tropical range, but also in new temperate areas in the United States and China, reaching as far north as Chicago and Shanghai, respectively. A albopictus is forecast to spread widely throughout Europe and reach large areas of France and Germany over the next 30 years.

It would establish itself in the northern United States and the highlands of Latin America and East Africa. The researchers point out the importance of curbing climate change considering that after the next five to 15 years, expansion of these mosquito species will be driven by changes in climate, temperature and urbanisation that create new and favourable habitats for them to breed.

Climate change increases the vector population too, as mosquitoes are now able to breed through the year. For instance, at present most of the predicted transmission risk of zika virus occurs in the tropics. A study published in Global Change Biology on October 9, 2020, shows that if climate change remains unmitigated, as many as 1.3 billion new people could be living in areas with temperatures suitable for zika transmission by 2050.

Most regions in southern and eastern Asia and sub-Saharan Africa could face year-round outbreaks of zika infection. A mathematical model published in Frontiers in Public Health on June 12, 2019 indicates that while global abundance of A aegypti over the last century till now increased by 9.5 per cent, it is expected to increase by 20 per cent under low carbon emission and 30 per cent under high carbon emission scenarios by the end of this century.

Breeding behaviour of the mosquitoes has also changed. Traditionally, it is believed that the mosquito species breed in clean water, but now studies suggest that they can also lay eggs in polluted water. Researchers from Tamil Nadu looked at the water quality of A aegypti mosquitoes’ breeding sites. Of the 16 types of breeding sites studied, they found that seven contained slightly polluted water.

This was published in the Indian Journal of Science and Technology on May 7, 2020. In Sri Lanka, researchers spotted A aegypti in drains. In their study published in International Journal of Tropical Insect Science in December 2019, they concluded that constant exposure to insecticides during vector control campaigns have probably compelled the mosquito to adapt to new ecological niches.

There is also evidence that Aedes mosquitoes can breed in brackish water. Researchers from Sri Lanka reported in 2011 in the journal PLoS Neglected Tropical Diseases that both A aegypti and A albopictus lay eggs and their larvae survive to emerge as adults in brackish water in discarded plastic and glass containers, abandoned fishing boats and unused wells in coastal peri-urban environment.

Several other factors are also responsible for the increasing menace caused by these mosquitoes. This includes environmental cues such as light pollution. While A aegypti typically bites people during the day (early morning to afternoon), artificial lights have increased their feeding period and consequently their ability to spread diseases. Researchers from the University of Notre Dame, US, reported in the American Journal of Tropical Medicine and Hygiene in 2020 that increasing levels of light pollution could impact transmission.

Samuel Rund, a staff scientist in the Department of Biological Sciences designed an experiment in which he allowed caged mosquitoes to bite his arms under controlled conditions: During the day, at night and at night in the presence of artificial light. He found that the female mosquitoes were twice as likely to bite at night when they were exposed to artificial light.

A aegypti has also developed resistance to common insecticide permethrin. A study published in PLoS Genetics on June 17, 2021, shows that resistant mosquitoes have a mutation in a gene that controls a cellular channel known to be involved in insecticide resistance. It also carried mutations in detoxification genes and cuticle protein genes. The cuticle makes up the insects’ tough outer shell and can slow the insecticide absorption in the body.

Viruses too are changing

Climate change has also affected the disease carrying capacity of mosquitoes. A review paper published in The Lancet on October 30, 2021 assessed the influence of temperature and rainfall on the capacity of the mosquito to spread the disease.

The researchers overlaid it with human population density data to estimate the reproductive number (R0; the expected number of secondary infections resulting from one infection). Their findings show that the R0 for all arboviral diseases tracked has increased since 1950-54; in 2020, number of infections transmitted by A aegypti was 13 per cent higher than the 1950-54 baseline years and those spread by A albopictus was 7 per cent higher.

Some studies also show that the mosquitos are turning into more efficient vector. For instance, A aegypti has two subspecies: The original African subspecies A aegypti formosus and A aegypti aegypti that evolved to specialise in biting humans. The latter can thus transmit infectious diseases among humans more easily.

A group of researchers led by Louis Lambrechts of the Insect-Virus Interactions Unit of Institut Pasteur in France tested 14 mosquito colonies developed from field samples collected in Asia, Africa and the Americas, and found that the African mosquitoes were less likely to acquire zika virus in their blood meals.

Mouse infection experiments showed that African subspecies transmitted a smaller virus inoculum than the human specialist. Genetic differences located on the mosquito chromosome 2 are likely the cause of the increased susceptibility to zika virus found in A aegypti aegypti outside of Africa, they concluded in their study published in the journal Science on November 20, 2020.

The virus also affects the behaviour of the mosquitoes. Researchers from Australia report in the journal Emerging Microbes and Infections on April 25, 2018, that zika virus targets A aegypti’s neurons and induces changes in its behaviour.

Zika virus-infected females showed significantly increased movement compared to uninfected females during the egg-laying phase. The team showed a spike in the activity of mosquito’s primary neurons after infections.

While curbing climate change seems to be a solution to escape the mosquitoes, it may not be as easy, researchers point out in PLoS Neglected Tropical Diseases on March 28, 2019. A aegypti is heat-tolerant and the A albopictus is heat-limited.

This suggests that while complete mitigation of climate change to a pre-industrial baseline may protect almost a billion people from arbovirus range expansions, middle-of-the-road mitigation could produce the greatest expansion in the potential for viral transmission by A albopictus.

The worrisome part of this is mitigating climate change would shift the burden of Aedes transmitted viruses from higher-income regions back onto the tropics, where transmission would have otherwise begun to decline due to rising temperatures.

Controlling the vector is the only option that we have. “The viruses are very difficult to control because they move around with infected people, a large proportion of which do not experience symptoms so do not know they’re infectious,” says Erin Mordecai, associate professor at the biology department of Stanford University, US, who has studied the impact of climate change on virus transmission by vectors and is one of the authors of the study published in PLoS Neglected Tropical Diseases.

Controlling the vector and reducing the social and ecological conditions that allow it to thrive around people (dense, crowded urban areas with unreliable access to piped water and solid waste sanitation, housing with inadequate window and door screens) are some of the most effective and sustainable ways to control the disease, she says.

Other technological strategies include engineering the mosquito to be sterile or to be refractory to the viruses using Wolbachia or genetic engineering, but these often need to be perpetually maintained, so they’re not long-term sustainable solutions, Mordecai adds.

The only way to survive in the complex situation is to identify their hideouts. In a study published in Lancet Planetary Health on July 7, 2021, researchers collected data between 2008 and 2020 from cities in southern Mexico and found that a 62 per cent overlap of hotspots for dengue and zika and 53 per cent overlap for cases of dengue and chikungunya.

This means, identifying the hotspots of one fever, dengue, for instance, can help create predictive map for future outbreaks of zika and chikungunya. Knowing these hotspots can help health officials carry out targeted interventions for mosquito control.

This was first published in Down To Earth’s print edition (dated 1-15 December, 2021)