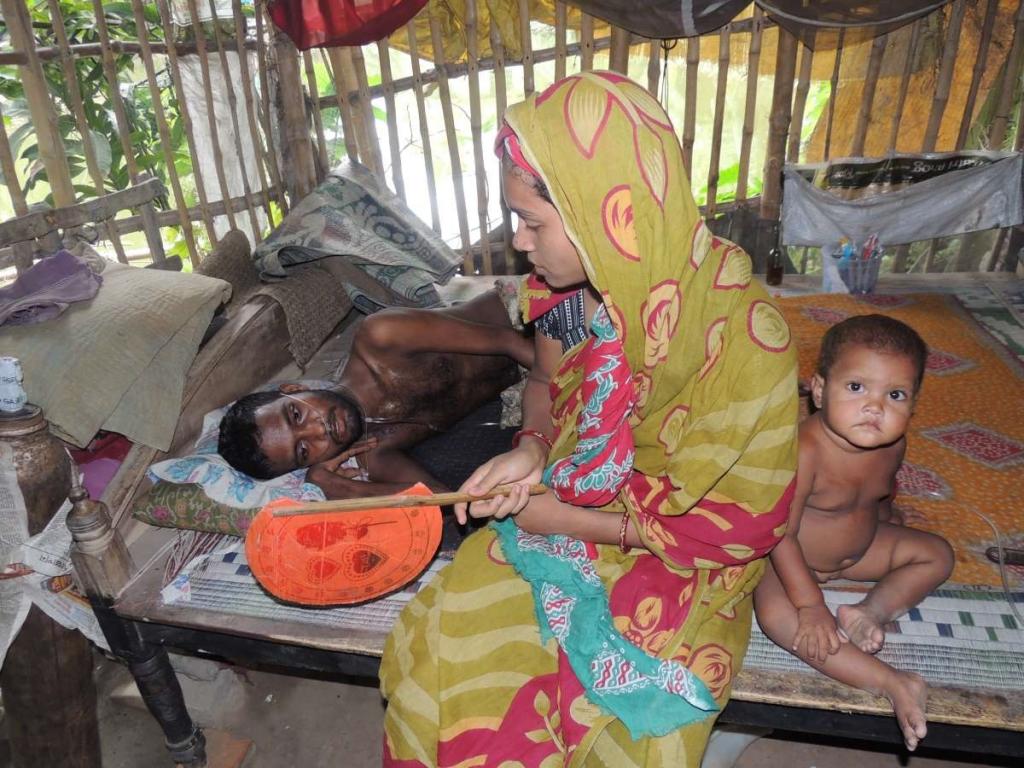 At least 250 people from Minakhan block in Sunderbans contracted the disease when they left home to work as labourers in stone and mineral grinding factories after cyclone Aila. Photo: Jayanta Basu

Around 250 people from various villages of Minakhan block in Sunderbans areas allegedly contracted the disease: They left home to work as labourers in stone and mineral grinding factories in Burdwan district after cyclone Aila struck in 2009.

They reportedly worked in unhygienic conditions and without protective gear. As many developed respiratory problems, the entire group left the job and returned to Minakhan.

Silicosis is an lung disorder caused by inhalation of silica dust while working in factories processing sand, rock or mineral ores such as quartz. Continuous exposure can cause silica to build up in lungs and breathing passages. It can be fatal.

But there has been little respite: At least 25 persons (most of them in their 20s and 30s) allegedly died due to silicosis since 2012. The West Bengal government, under the directive of NHRC, announced compensation of Rs four lakh per family for 13 families, all of whom lost a member to the disease.

It came up that your state has not yet framed a silicosis rehabilitation scheme. Secondly, the concerned authorities of the state are not responding to the processes of the commission, even the summons of the commission are not being attended to…

The letter, a copy of which is with Down to Earth, also referred to a complaint made against the Bengal government stating that “the doctors of the state government were either not diagnosing the disease or they were under instruction not to correct diagnosis”.

The commission has given six weeks to the chief secretary to respond to the allegations mentioned in the letter, which were raised during a recent web meeting conducted by the commission in various states of the country, including West Bengal. The regional rapporteur of the commission has also been asked to visit the silicosis-affected areas in Minakhan and submit a report within eight weeks.

During an earlier hearing, while announcing compensation verdicts for families of five dead workers, the commission observed that “it is clear that the five workers died due to carelessness / negligence of the enforcement agencies of the state of West Bengal, who had not ensured that the factory management provides necessary protective equipment for the protection of workers from inhaling silica dust”.

The commission had earlier also pointed out that the state should proactively pay compensation, adding that “the victim or any non-profit on their behalf should not have to run to the commission each time a death takes place due to silicosis or a new case is found”.

“The state government has not paid compensation to many families of the people in Minakhan who died of the disease, including those who were confirmed by state government doctors to have the disease,” said Samit Carr of OSHAJ, a Jharkhand-based non-profit, which has been fighting for the silicosis-affected people of Minakhan for quite some time.

Non-profits such as Nagarik Mancha and Sabujer Avijan from the state had also earlier approached the commission on the matter.

The state government has allegedly been trying to pass off several such deaths as deaths caused by tuberculosis or other diseases.

“The state government fears that once it accepts the demands for compensation, the floodgates will open in a state with about 1,500 similar stone and mineral crushing units, at least 90 per cent of them illegal and almost all flouting prescribed safety norms,” said Naba Datta of Nagarik Mancha.

“We wrote to various senior state officials repeatedly about the deaths but the matter is kept being passed from one department to another,” said Biswajit Mukherjee of non-profit Sabujer Avijan and retired chief law officer in state environment department.

Mukherjee was one of the earliest to bring the Minakhan issue to the fore.

A senior health department official in state government recently told DTE that there has been lack of convergence within various departments in compensating the silicosis patients. “It’s a fact that we tend to wake up whenever NHRC issues any directive,” said the official, claiming that the silicosis rehabilitation scheme would soon be finalised.

The state government doctors so far have identified 35 confirmed silicosis patients in Minakhan based on X-Ray plates, according to reports accessed by DTE.

Non-profit OSHAJ also confirmed silicosis among 35 persons, 14 being common with government list. OSHAJ also identified 14 suspected silicosis patients, which effectively takes the number to 70. Carr claimed that many more were affected, many of whom do not either have X-Ray plates. The X-Ray plates of others have not been considered by the state government.

“The tell-tale symptoms of silicosis were found in almost all those who died through the X-Ray plate analysis. Many others are grappling with it. The state government should provide compensation to all,” said Saidul Islam from Minakhan.

Monirul Molla, who was part of the group that went to work in Burdwan, pointed out that he and other affected ones have been shuttling from one hospital to another.

Locals have been demanding regular treatment and other support from the administration.

“I lost my both sons to silicosis. I am also suffering from it. Apart from the compensation, we demand that appropriate facilities be created in nearby Minakhan hospital,” said Bankim Mondal, one of the earliest to migrate from Minakhan to work in silica-generating factories.