Odisha migrant workers return from Gujarat, Maharashtra amid fears of another lockdown

Trains from Gujarat and Maharashtra to Odisha are full, although rail officials can’t confirm whether all passengers are migrants 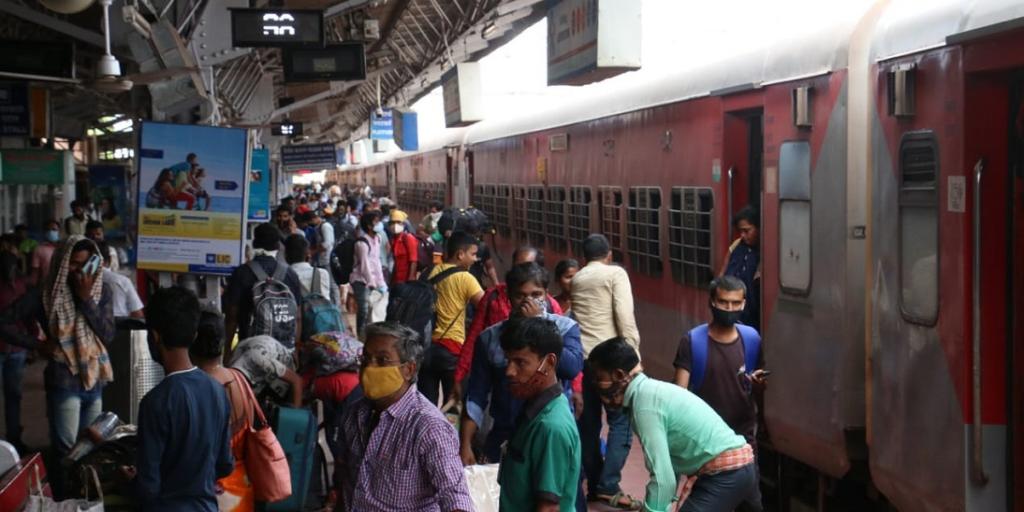 Migrant workers from Odisha working in Gujarat and Maharashtra, have been returning to their home state in droves amid apprehensions of a fresh lockdown due to a surge in the number of novel coronavirus disease (COVID-19) cases in their work places.

Around 2,000 people arrived at the Berhampur railway station in Ganjam district in two special trains, Okha-Puri via Surat and Pune-Bhubaneswar April 9, 2021.

Many of the returnees are from Surat, one of the COVID-19 hotspots of Gujarat. Ganjam is a district that witnesses a lot of migration. Some 0.8 million people from the district work in other states, mostly in Surat and Mumbai.

Bijay Bhuyan (45) of Gangapur, a textile mill worker at Surat, returned along with his wife. He said the fear of another lockdown imposition forced them to return to their native village.

He, however, was not aware about the state government’s order for returnees to get an RT-PCR test done and isolate themselves for seven days.

The Odisha government has ordered all passengers coming to the state from anywhere through any mode, to have an RT-PCR negative test report of maximum 72 hours before the start of the journey or a second dose vaccination certificate. The restriction came into effect from April 10.

Though Surat’s textile mills were running normally, the situation in the Gujarat city was very grave, with a daily spike in the number of COVID-19 cases, Ashok Naik of Banapur in Khurda district, who also returned in the same train as Bhuyan, told this reporter.

Trains from Gujarat and Maharashtra and bound for Odisha were full, Nirakar Das, public relations officer, East Coast Railway, said. However, he could not confirm whether all the returnees were migrant workers.

In the wake of the country-wide lockdown in March 2020, as many as 853,777 people had returned to Odisha from three states — Gujarat, Tamil Nadu and Kerala — during April-September 2020 in special trains arranged by the state government, according to the Odisha Economic Survey 2020-21.

Many more people had also returned to Odisha in special buses, on foot and also via the sea.

Meanwhile, Odisha Chief Secretary Suresh Mohapatra has written a letter to the Chairman of the Railway Board Suneet Sharma to cancel all passenger and express trains coming from Chhattisgarh (originating in / passing through) to Odisha.

This is because the situation in Chhattisgarh is very grave due to a surge in COVID-19 cases. As many as 21 trains originate in or pass-through Chhattisgarh to Odisha.

The government has also suspended public transport to Chhattisgarh till April 30, 2021 and sealed its border areas to restrict cross-border movements.