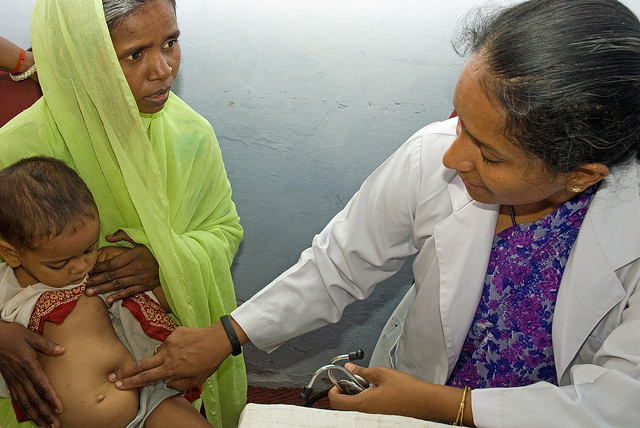 Union Minister of Women and Child Development (WCD), Maneka Gandhi, seems to be pitching for the controversial idea of packaged micronutrients. In an event organised to release reports on nutrition, the minister said that a centralised food system will solve the malnutrition problem.

Two reports, titled, "India Health Report: Nutrition 2015" and "Global Nutrition Report-2015" were released on the occasion. The focus of the event was to discuss the slow eradication of malnutrition.

However, while discussing the challenges about Anganwadis and the quality of supplementary food under Integrated Child Development Services (ICDS), Gandhi proposed a centralised food system at the district or state level as a solution.

Problems such as uneven distribution, leakages and hygiene, that plague the ICDS, can be resolved through centrally packaged micronutrients that children can add to any food item, ranging from the very traditional poha to noodles, she argued.

Notably, the Supreme Court has repeatedly advocated self-help groups and local communities to provide locally prepared food since 2004. Experts have also suggested that this is the best solution for food-related malnutrition.

This is not the first time when packaged food has been endorsed as an answer to malnutrition. In 2013, Lancet, a UK-based medical journal, published papers that called for engaging private sector in fighting nutrition. In response, several health experts had cautioned the government about the possible commercial exploitation of malnutrition in the country. They also wrote letter to Ministry of Health and Family Welfare (MoHFW) and WCD against any such move.

The study, however, was mired in a controversy. A few researchers were found to be associated with food products and micronutrient industry. Lancet had declared that two writers, Robert E Black and Venkatesh Manna, had conflict of interest.

The ICDS, the largest scheme of its kind, is a big business opportunity for the private sector, experts allege. ICDS serves all children less than six years of age and pregnant and lactating women. The size of beneficiaries under the scheme is of more than ten crore people.