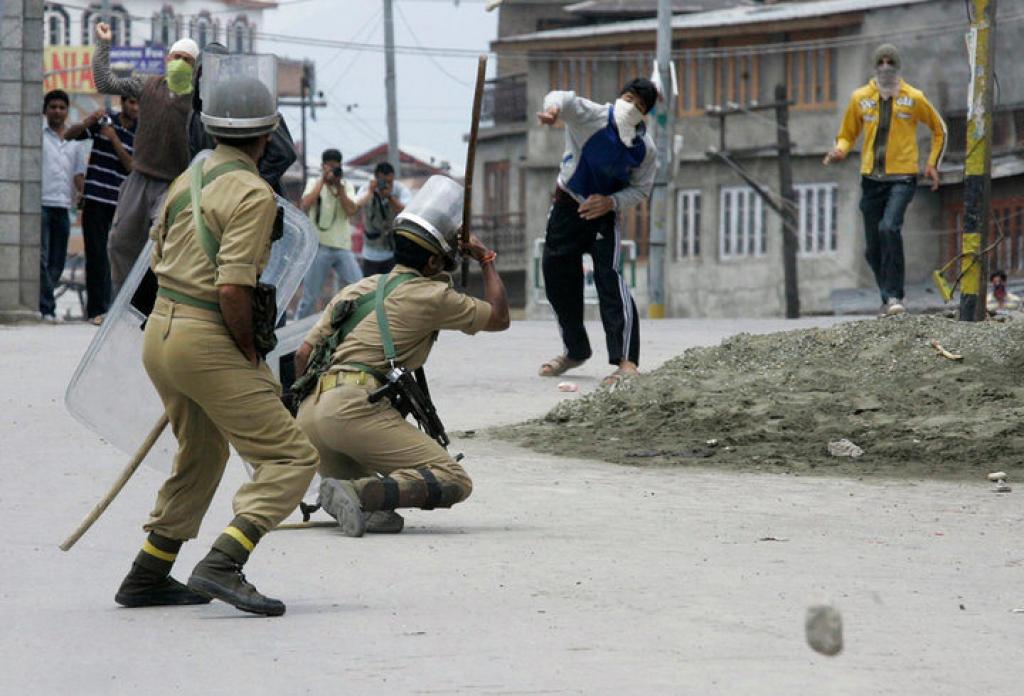 At least 92 people sustained severe eye injuries during the recent spate of clashes between protesters and armed forces. Pellet guns, which were introduced by the state police in 2010 as a “non-lethal weapon” to quell protests in Kashmir, have inflicted grievous injuries on civilians.

During the 2010 summer uprising, number of pellet-injured people admitted to state-run SMHS hospital in Srinagar alone, was close to 40. In 2013, an RTI filed by advocate Abdul Manan Bukhari revealed that 91 patients with pellet gun injuries were admitted in the hospital from March 2010 to October 2013. Out of the 91 patients, 36 were admitted in the Department of Ophthalmology and 14 pellet-injured people had no chance of regaining their eyesight.

The doctors at SKIMS conducted a study on 198 patients who suffered pellet injuries. They observed: “whilst the pellet wound itself may seem trivial, if not appreciated for the potential for tissue disruption and injuries to the head, chest and abdomen, there can be catastrophic results.” The study also noted: “patients should be evaluated and managed in the same way as those sustaining bullet injuries.”

Talking to Down To Earth, an ophthalmologist at Government Medical College, Srinagar, who requested not to be named, stated that there has been an unprecedented surge in the number of patients coming with pellets-related eye injuries. “We have received 111 patients in the last 48 hours. While 47 of them have been discharged after being treated, there are 25-30 people whose injuries are very bad. Even if we do 2-3 surgeries on each of the patients, the chances of preventing permanent blindness are almost negligible.”

Few days back, Sajad Khanday, consultant ophthalmologist at SMHS, had told media, “Pellets can cause corneal abrasion, lens dislocation, retinal tear and cataract. Their eyesight is badly affected or even permanently gone. It invariably damages all the components of the eyes.” Explaining the seriousness of the injury, he said that the eye doesn’t retain its normal size and its shape gets distorted inside out.

Khanday also said, “If it is embedded directly in the eye then there are more than 99 per cent chances of losing the eyesight. Victim can also suffer a brain hemorrhage due to pellet injuries.”

It has also come to pass that injured civilians avoid visiting hospitals in fear of being arrested and booked by the police. Most of them prefer being treated outside the state, especially in Delhi. Hence, the data received from state hospitals doesn’t always reveal the actual number of victims.

UN standards on the use of firearms

According to the ‘Basic Principles on the Use of Force and Firearms by Law Enforcement Officials’ adopted by India, along with other nations, in 1990, whenever the lawful use of force and firearms is unavoidable, law enforcement officials shall:

(a) Exercise restraint in such use and act in proportion to the seriousness of the offence and the legitimate objective to be achieved;

(b) Minimise damage and injury, and respect and preserve human life;

(c) Ensure that assistance and medical aid are rendered to any injured or affected persons at the earliest possible moment;

Contesting the process adopted by state police and paramilitary forces of using firearms to quell protests, Bukhari says Basic Principles on the use of force and firearms clearly disallow the use of force in dispersing non-violent and unlawful assemblies. He also said that as per Section 129 of the Code of Criminal Procedure (CrPC) of the Indian constitution, armed forces have to disperse the mob with maximum restraint.

“How can pellets be non-lethal? When fired from a short range, they make deep perforations in a body and render people maimed, permanently. I have treated patients with injuries in their ears and limbs. Be it rubber bullets of pellets, the injuries are fatal, ” Bashir Ahmad Mir, Department of Orthopedics, Government Medical College, Srinagar, told Down To Earth.

The pellet guns, which are used by the J&K Police and the CRPF, are manufactured by Indian Ordnance Factory Ammunition Factory in Pune. The shots are usually made of lead-based alloy and travel at subsonic speed when fired from gun. The alloy proves detrimental as it inflicts multiple-organ injuries. At one shot, a pellet gun fires numerous pellets at multiple targets, hence increasing the risk of multiple injuries.

Moreover, the pattern of firing by the armed forces does not meet the UN standards. Pellet guns are supposed to be fired from some distance but people are losing their eyesight as these guns are being used from a very close range.

In his book, “Kashmir—Scars of Pellet Gun”, Bukhari has argued that using pellet guns to disburse protesters is alien in civilised societies of the world and its use on unarmed civilian populations is generally considered a transgression of human rights. He also noted that this “non-lethal” weapon is exclusively used in Kashmir and have never been used in other parts of the country. He has also accused the police and CRPF personnel of targeting vital parts of civilian protesters.

Talking to Down To Earth, Aasiya Naqash, Minister of State for Housing & Urban Development Social Welfare, Health & Medical Education, said the J&K government is convinced that armed forces should practise maximum restraint when using pellet guns. Although there hasn’t been any significant development in the state assembly to ban the use of this weapon, discussion has been going on for quite some time. “Our kids and young people are increasingly being injured due to pellet guns. That’s creating a vicious atmosphere and giving birth to misgivings in the minds of the people.”

On being questioned why is the government oblivious to the cost of treatment that the families of injured civilians have to incur, she says, “Today, CM saheba instructed me to collect the data of number of people with pellet injuries in SKIMS and SHMS. Even if they had to be shifted to other states for treatment, the government will make all the arrangements.” Naqash is the first minister from the PDP-BJP coalition government who sought ban on the use of pellet guns.