Loaded with immunity-boosting properties,parijaat flower is used in various delicacies during the onset of winter

Parijaat or harsingaris a common garden shrub found almost all over India. It is valued for the beautiful, mildly fragrant white and orange flowers it bears just before Shardiya Navratra and its flowering season naturally links it to religious faith.

Personally, harsingar brings back the memories of my childhood, when the sprinkling of these flowers from trees marked the arrival of winter. We used to collect the flowers early in the morning from the dew-soaked grass. Those were the days when winter arrived a bit earlier than it does in today’s skewed weather patterns. My grandmother would clean all the flowers and keep them in the sun to dry, and we would help her do all these sacred-looking rituals. Fresh flowers were added to kheer (a sweet dish made from milk and rice) and some were sun dried to be used as a substitute for saffron for mithai (sweets).

“It is good for health too,” is what she used to announce and we believed her wisdom blindly. Later, I read about the medicinal properties during my studies. I would tell my grandmother the exact benefits of the flowers, and she would beam at her wisdom getting legitimised.

I saw the leaves of parijaat (Nyctanthes arbortristis) being used for the first time after I got married. My mother-in-law would boil them in water to make kadha (herbal concoction) for her gouty joints. A friend’s mother would dry the leaves in the shade, powder them and have a teaspoon of it every day with warm water to treat her liver inflammation. A thick paste of the seeds is used as local application to treat boils and as a face pack to cure acne. 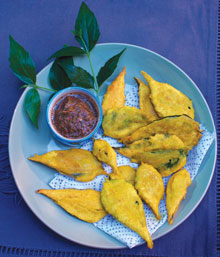 Later, when I made some Bengali friends who were great cooks I learnt that the leaves of parijaat, called shiuli in Bengali, are added to shukto (a mixed curry) as replacement to other bitter vegetables in the season when the plant sprouts new leaves. The tender leaves, which start sprouting as soon as the flowers shed and coin-shaped seeds appear on the shoots, are also added to pumpkin or brinjal curries. When using the leaves for cooking it is preferable to use leaves that are tender because the mature ones taste chewy in the mouth. The mature leaves may be used for making powder after drying and pounding for use in kadha.

Parijaat leaves are categorised as bitters in traditional medicine systems and are considered a liver tonic. They are also ascribed detoxifying properties. A study showed that the water extract of the leaves contains tannins, saponins, terpenoids, flavonoids, steroids and glycosides and the extract acts like an antimicrobial against pathogenic bacteria like Salmonella typhi that causes typhoid. The study was published in the Journal of Pharmacognosy and Phytochemistry in 2013. Different parts of the plant have hepatoprotective (beneficial for the liver), antihistaminic (anti-allergic), antibacterial, antiviral, antifilarial, antioxidising, antdiabetic and immunoprotective properties. 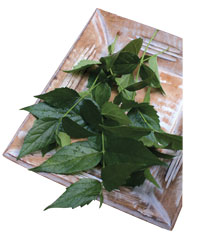 The immunity-boosting property of the plant explains why many cultures in India start using the leaves in everyday meal around the onset of winters when the immune system is often the weakest. Pakoda made of whole parijaat leaves are common in Assam, Bengal, Manipur and central Indian states.

Assamese use the flower, locally known as xewali, for various preparations—in snacks, in the main course or in side dishes. Kharis one such Assamese preparation. It is a curry that uses a natural soda along with vegetables or fish. Sometimes broken rice and parijaat flowers are used as replacement for seasonal vegetables to make khar.

Bengalis use the flower to make bora, a fritter. Bora is prepared by mixing fresh flowers with besan (gram flour), rice flour, nigella, chilly and salt into a thick batter and deep frying small portions of the batter. Fresh or sun-dried flowers along with aromatic spices and nuts are used in Bengal for making pulao (a rice dish). Bengalis also make a rice flour savoury pancake with the flowers, chopped onions and green chilly. With the onset of winters, the flower is set to adorn the plates of many.

The writer is a food and nutrition consultant