A CHAMPION OF PUBLIC HEALTH 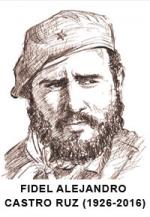 The demise of Fidel Alejandro Castro Ruz is a huge loss to the global public health. As the leader of the island nation of Cuba for nearly half-a-century, Fidel not only led exemplary initiatives to ensure healthcare for all within the country, but also ensured that Cuban doctors were the first to reach out to people in developing countries during natural disasters. Under Fidel, Cuban medical scientists also developed cutting-edge measures to combat diseases, ranging from meningitis to cancers.

Across the political spectrum, few would dispute the outstanding successes the Cuban healthcare system has achieved since Fidel and his comrades led the country’s revolution in 1959. As the country’s president, Fidel consistently promoted advances in primary healthcare, public health, medical education and research. These include establishing a widespread network of public hospitals and community-based clinics, emphasising on preventive and promotive health measures, and building a unique system for training of doctors and healthcare professionals.

Fidel supported the creation of the family doctor-and-nurse programme since the 1980s, ensuring that every neighbourhood of Cuba had access to primary healthcare. Small wonder, the country’s infant mortality rate stands at 4.2 per 1,000—the lowest in Latin America and even lower than the rate in the US—even though its per capita healthcare spending is just a fraction of that of the US.

Taking healthcare beyond its borders, Cuba has been sending its doctors and health workers to help deprived populations in developing countries during emergency since 1963. Today, over 30,000 Cuban healthcare workers, dubbed “army of white coats”, work in more than 60 countries. They were the first to reach the remote areas of northern Pakistan that suffered extensive damage during the 2005 earthquake. Over 2,500 Cuban medics saved lives by conducting operations on injured people even in extremely difficult conditions. During the recent Ebola epidemic in western Africa, the Cuban medical contingent was the largest foreign medical team from any country, providing care to people in Sierra Leone, Guinea and Liberia. Ban Ki-moon, Secretary General of the United Nations, stated about Cuban doctors: “They are always the first to arrive and the last to leave. They remain in place after the crises. Cuba can be proud of its healthcare system, a model for many countries.”

Cuba under Fidel’s leadership founded the Latin American School of Medicine in 1999, which has trained around 30,000 physicians from over a hundred countries. Indeed, if there is one developing country in the world today which stands out for its contributions to global health, it is Cuba. While Fidel is no more among us, we are confident that the sound foundations he has laid for public health will last for long and remain an inspiration to those committed to people’s health.

Shukla works with SATHI, Pune, and is a national convenor of Jan Swasthya Abhiyan