In India’s ongoing battle against the novel coronavirus disease (COVID-19) pandemic, Puducherry seems to have stood out.

The union territory (UT) with a population of 1.5 million and a thriving foreign and domestic tourism industry was significantly untouched by the virus (SARS-CoV-2) till last week. It was on April 1, 2020 that two men, who returned after attending Tablighi Jamaat congregation in New Delhi, tested positive and were admitted in state government hospital.

“The government’s cluster containment plan to contain the spread of the infection is active,” said a senior officer from Pondicherry district administration. He added that family members of the affected are under quarantine.

The government was quick to swing into action to curtail infection spread — even before the World Health Organization declared it a pandemic. It tightened its four-border checkposts — East Coast Road, Tindivanam Road, Cuddalore Road and Morattandi — well before the country started border checks.

It was in the first week of March itself when people at checkposts were asked to provide their travel and contact history. Those having travel history to other countries were compulsorily put in 14-day home quarantine.

More than 2,000 people have been quarantined and over 300 kept in isolation wards in hospitals so far, said Kumar. NRIs have also been asked to self-isolate for two weeks.

“We are making multiple visits to Auroville. Not a single case has been reported from there so far. It’s a township having a mixed population of domestic and overseas residents,” said the senior district administration officer.

As 4,000 foreign tourists visited Pondicherry district between February and March first week, the government had an uphill task at hand.

In the first week of March, hotels were asked to implement a guest check-in declaration form. The form helped in identifying guests who had travelled to any high-risk country recently or displayed symptoms.

Setting up of inter-district cell comprising health, revenue and other government officials, was another great intiative. The machinery could work closely with other districts such as Cuddalore and Villupuram to ensure safety measures are implemented.

At a time when there is a mass exodus of migrant workers from cities, the Puducherry government stalled the migration of more than 4,000 workers.

“A company in Pondicherry district wanted to send migrant workers back, but the government intervened. We urged the company that it was their responsibility to take care of workers and provide them food and shelter,” said a senior officer from the district administration.

Besides, announcements were made on mics fitted in autos and pamphlets were distributed. The government also used prime-time television shows and cinema halls (before they were shut across India) to spread awareness.

The government started producing face masks and hand sanitisers by the second week of the month. With the help of women self-help groups (SHGs), more than 20,000 bottles of hand sanitisers were made. 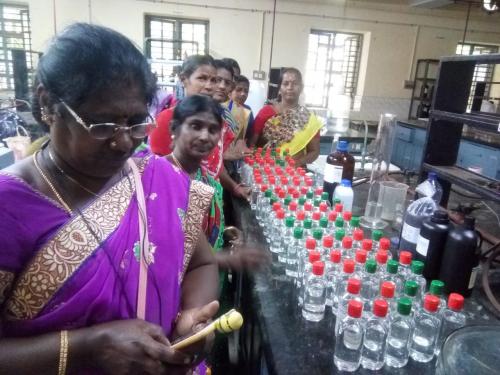 Besides, orders were placed for more than 200,000 face masks well in advance. As of now, these masks and hand sanitisers are available for frontline workers including anganwadi, police and others in the field. Even prison inmates were roped in to make cloth masks.

All of this, added with the timely decision to on social distancing made the work easier. Nine flying squads and ward committees were set up to ensure social distancing guidelines are followed, according to the senior officer.

“Quarantine and social distancing are largely being followed here. No cases have been reported of people slipping from quarantine,” added the officer.

Further, inter-district cell was set up to facilitate smooth transportation of essential commodities.

Puducherry’s healthcare infrastructure is well-established. It has nine medical colleges, 41 primary health centres (PHCs) and 81 sub-centres. The PHCs and sub-centres are converted into health and wellness centres. There is adequate manpower to run things smoothly and no shortage of doctors, said Kumar.

Puducherry has kick started rapid testing as well. Mass testing, according to ICMR guidelines, is being done by Jawaharlal Institute of Postgraduate Medical Education and Research.

When the health ministry issued telemedicine guidelines to cut risks of transmission between doctor and patients, Puducherry was quick to respond. Telemedicine kiosks were set up at the centres immediately.

As many as 29 medical tests are performed free of cost at these kiosks, TL Nandagopal, chairman of Gcare Diabetes Council, a non-governmental organisation that provides kiosks machines, said.

There has been mass cancellation of bookings by tourists, said a hotelier in Pondicherry. Thousands of hotel rooms sit empty, affecting livelihood.

The current situation has left peak tourism season in tatters.

“Stores are already struggling because of e-commerce boom. Five years ago, I made a profit of Rs 5,000-6,000 a day. Now I am hardly able to manage Rs 3,000 a day. The virus has dealt the final blow,”  said Nawaz, who owns an antique jewellery store at Roman Ronald road of Pondicherry’s French Colony.

All the shops and establishments in Pondicherry were asked to shut down two days before the nation observed the Janata curfew on March 22.